Earlier this month, Congressman Jared Polis extended a headline-grabbing invitation to President Barack Obama and Senate Majority Leader Harry Reid. In a Jan. 23 letter addressed to two of the most powerful men in Washington and the Democratic Party, the Colorado Democrat said Obama and Reid should accompany him on a tour of one of his state’s recently opened marijuana dispensaries.

“I would like to extend an invitation to both of you to visit Colorado and join me to visit a legal dispensary and grow operation to see how the law is being implemented in the state,” Polis wrote. “I am confident that when you see Colorado’s work to implement the law while protecting children and raising revenue for our schools firsthand, we can begin to make similar efforts on a federal level.” 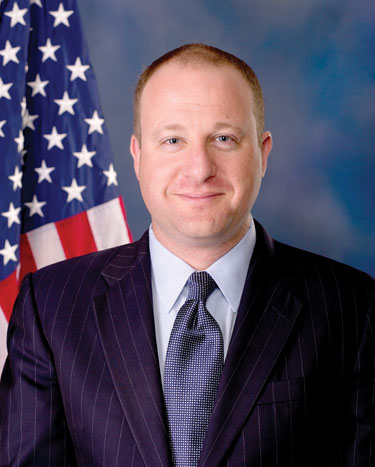 Polis, who is the most senior out member of the House of Representatives, has become a champion of marijuana decriminalization since arriving on Capitol Hill in 2009. Having declared that America is losing the war on drugs, Polis has argued that the federal government should stay out of the business of telling states what they can and cannot do when it comes to decriminalizing pot.

“Congress should simply allow states to regulate marijuana as they see fit and stop wasting federal tax dollars on the failed drug war,” Polis has said.

This anti-big government view, which Polis has said stems from the failure of a national prohibition of alcohol during the 1920s and 30s, became particularly significant when 55 percent of Colorado voters approved a constitutional amendment in November 2012 permitting recreational use of marijuana for adults over the age of 21. In August, the Justice Department announced they would not challenge Colorado or any other state that chose to decriminalize marijuana, instead focusing their resources on drug trafficking and protecting children. On Jan. 1, retail marijuana went on sale to the Colorado public with a 25 percent state tax, plus an additional 2.9 percent state sales tax. As one of the most heavily taxed consumer products in Colorado, marijuana sales are expected to generate $67 million a year in tax revenue, with $27.5 million of that designated for school construction.

Nevertheless, marijuana remains illegal in the eyes of the federal government — and Polis is seeking to change that.

“This legislation doesn’t force any state to legalize marijuana, but Colorado and the 18 other jurisdictions that have chosen to allow marijuana for medical or recreational use deserve the certainty of knowing that federal agents won’t raid state-legal businesses,” Polis said in a statement.

Under the proposed legislation, the attorney general would be directed to issue a final order removing marijuana entirely from the Controlled Substances Act and would place the drug under the same regulations as alcohol when it comes to such things as interstate and foreign commerce. The Drug Enforcement Administration currently classifies marijuana as a Schedule 1 substance, defined as “the most dangerous drugs of all the drug schedules with potentially severe psychological or physical dependence.”

Last introduced in Feb. 2013, the bill has 16 cosponsors, including one Republican, Rep. Dana Rohrabacher of California. The bill still has a step climb in the Republican-controlled House of Representatives, but the implementation of decriminalization in Colorado appears to be shifting the conversation.

In a recent interview with The New Yorker, President Obama said he does not consider marijuana anymore dangerous than alcohol, but added that there is no one size fits all approach.

“As has been well documented, I smoked pot as a kid, and I view it as a bad habit and a vice, not very different from the cigarettes that I smoked as a young person up through a big chunk of my adult life. I don’t think it is more dangerous than alcohol,” Obama said. “[W]e should not be locking up kids or individual users for long stretches of jail time when some of the folks who are writing those laws have probably done the same thing.”

“He’s talking about the issue of the disparities in our prosecution of our drug laws that an experiment like this may be addressing. He’s not endorsing any specific move by a state; he’s simply making an observation,” Carney said. “His position on these matters has not changed.”

As of yet, President Obama has not responded to Polis’s invitation to a marijuana tour of Colorado.