Gov. Terry McAuliffe (D) was sworn into office in Richmond on Saturday, sparking hope among equal-rights advocates that his position as an LGBT ally may foster incremental changes to Virginia’s discriminatory laws.

In his inaugural address, McAuliffe specifically referenced some of the ongoing fights in the commonwealth that pertain to LGBT rights, promising that his administration would ensure economic, educational and social opportunities for ”all of Virginia’s children – no matter if you’re a girl or a boy, no matter what part of the commonwealth you live in, no matter your race or religion, and no matter whom you love.” McAuliffe also said there is still work to be done ”to ensure that someone can’t lose a job simply because they are gay.” 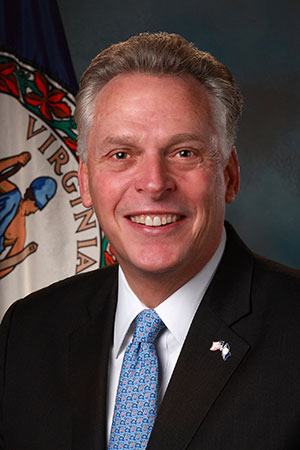 In keeping with that spirit of his address, McAuliffe signed into effect on Saturday Executive Order 1, which supersedes and rescinds an executive order by former Gov. Bob McDonnell (R) that did not specifically protect LGBT individuals from discrimination. Under McAuliffe’s executive order, discrimination in state employment is prohibited on the basis of race, sex, color, national origin, religion, sexual orientation, gender identity, age, political affiliation, status as a veteran or disability.

The order directs state appointing authorities and managers to take affirmative measures to emphasize the recruitment of qualified minorities, women, disabled people and older Virginians to serve at all levels of state government.

The executive order also states that ”allegations of violations of this policy shall be brought to the attention of the Office of Equal Employment Services” and prohibits retaliatory actions by supervisors against those who complain of discrimination.

LGBT advocates are optimistic about the potential for greater equality under a McAuliffe administration. The LGBT-rights organization Equality Virginia, which endorsed McAuliffe in his campaign against Ken Cuccinelli, Virginia’s former attorney general, sent a contingent that marched in McAuliffe’s inaugural parade and was present for his signing of the executive order.

On Monday morning, Equality Virginia hosted a press conference with Robin Gorsoline, the head of People of Faith for Equality in Virginia (POFEV), an organization of interfaith clergy and laypeople who advocate on behalf of LGBT rights; and state Sen. Adam Ebbin (D-Alexandria City, Arlington, Fairfax counties), who is the only out member of the General Assembly, Sen. A. Donald McEachin (D-Richmond, Henrico, Hanover, Charles City counties) and Del. Patrick Hope (D-Arlington Co.) to discuss several legislative priorities that Democrats – and a handful of House Republicans – are trying to get passed.

Among the topics discussed was a bill sponsored by Ebbin to repeal Virginia’s constitutional amendment banning any and all recognition of same-sex relationships. The conference also addressed two bills put forth by McEachin: one, SB248, to codify the executive order signed by McAuliffe into law, and the other, SB252, to expand the state health plan to give some state employees the option of covering a same-sex spouse, among other benefits.

Another bill discussed at the press conference is to be introduced by Hope. It would ban ”gay conversion” therapy for minors.

”Even though the commonwealth is taking steps toward equality, the truth is we have a long way to go,” James Parrish, executive director of Equality Virginia, said Monday. ”An overwhelming majority of Virginians believe that gay, lesbian, bisexual and transgender individuals should have the right to work for the government without facing discrimination, and when it comes to marriage, they believe that gay and lesbian couples should be able to marry the person they love and have that relationship recognized where they live.”

”Sens. Ebbin and McEachin are listening to their constituents and to the majority of Virginians,” Parrish continued. ”The time for equality is now! I hope that legislators are listening to their constituents when it comes to LGBT rights. The decisions being made at the General Assembly must start reflecting where Virginians stand when it comes to issues of fairness and equality.”

Anti-gay animus among some members of the General Assembly was on display as recently as Dec. 9 when Del. Mark Cole (R-Fredericksburg, Stafford, Fauquier, Spotsylvania counties), who chairs the committee through which a proposed voter referendum to repeal the Marshall-Newman Amendment would have to pass, announced that the committee would not be considering any constitutional amendments this session.

While Cole’s move would not completely eliminate the possibility of a repeal of Marshall-Newman by 2016 – though such a move would require two separate votes to approve a repeal ballot initiative in 2015 and again in 2016 – Del. Scott Surovell (D-Fairfax Co.), the chief patron of one of the repeal bills this session, blasted Cole’s decision.

”Virginia Republicans’ refusal to even consider same-sex marriage is backwards and proving increasingly archaic,” Surovell said in a statement. ”Marriage is about loving, committed couples who want to make a lifelong promise to take care of and be responsible for each other, in good times and bad.”

Surovell noted that he believes it is important to hold votes on possible repeals of the Marshall-Newman Amendment, even if they might not pass.

Despite Republicans holding a narrow 20-18 majority in the Virginia Senate, with one seat vacant and another seat in the middle of a recount following a Jan. 7 special election, no such pronouncements have been made by Senate leadership.

”Virginians are ready to repeal the Marshall-Newman Amendment,” Ebbin said in a statement in response to Cole’s actions. ”This unfair and discriminatory law denies loving couples the chance to build a life together, throwing up burdens that straight couples never have to face. People deserve to be judged by their actions, and laws that deny people fundamental rights because of their sexual orientation should have no place in Virginia. We have lost and will continue to lose hard-working citizens to other states.”

Besides Cole’s efforts to thwart pro-LGBT legislation, Del. Bob Marshall (R-Manassas Park, Prince William Co.), has introduced a bill that seeks to codify into law a discriminatory November ruling by the Department of Taxation saying that same-sex couples legally married elsewhere must file their Virginia taxes as individuals and will not be able to qualify for certain credits or exemptions, even as they are being told to file their federal taxes jointly.

In one of his last actions as attorney general, failed gubernatorial candidate Ken Cuccinelli issued a non-binding opinion in response to an inquiry by Marshall as to whether a governor could direct or require any agency of state government to allow same-sex couples to receive joint marital status for Virginia income-tax returns. In that opinion, which conflicts with federal law, Cuccinelli ruled that an executive order directing an agency to allow same-sex couples to file jointly would be unconstitutional and would violate the separation of powers, as taxation is a power that can only be exercised by the Legislature and the Marshall-Newman Amendment currently forbids the state or its political subdivisions from recognizing any form of same-sex relationship.

”A Governor may not use an executive order (or any other means) to exercise legislative power, which is vested solely in the General Assembly,” Cuccinelli wrote. ”Furthermore, a governor may not issue executive orders or take other action that is contrary to express provisions of the Virginia Constitution. Thus, if an executive order amounts to an exercise of legislative power or violates a provision of the Virginia Constitution, the Governor is without the power to issue it and the order necessarily is void.”

Parrish previously told Metro Weekly that Equality Virginia was examining its legal options as to how to allow same-sex couples to file jointly. Incoming Attorney General Mark Herring has not yet issued his own opinion regarding the taxation issue. A spokesman for the attorney general’s office was not immediately available for comment.

In the meantime, Equality Virginia remains opposed to passage of the Marshall bill, which McAuliffe would be likely to veto even if it were to pass the General Assembly.

”Equality will make its way to Virginia,” Parrish insisted Monday, ”and we are working to ensure that it happens sooner rather than later.”

John Riley is the local news reporter for Metro Weekly. He can be reached at jriley@metroweekly.com
← Previous Story Maryland To Recognize Utah Gay Marriages
Next Story → McBride Gets 10 Years for Non-fatal Attack on Transgender Woman