Olympics put Russia's anti-LGBT crackdown in the spotlight -- for now

By Will O'Bryan
Photography by Julian Vankim
February 6, 2014

With the 2014 Winter Olympics upon us, all eyes are on Russia. To an arguably greater degree than many of this year’s predecessors, however, many of those eyes won’t be as concerned with figure skating and bobsleds. Instead, Russia’s moment in the luge limelight is being colored by fears of terrorism and the country’s crackdown on human rights – particularly against the LGBT community.

Just last week, Vienna, Va.-based Spectrum Human Rights shared news of a Russian teenager being found guilty of breaking the country’s vague law, passed in June, banning “propaganda of nontraditional sexual relations” to minors because she disclosed her sexual orientation to classmates. Considering, in the wake of the law, the photos and videos coming out of Russia of gay people being attacked, the conviction is not surprising. 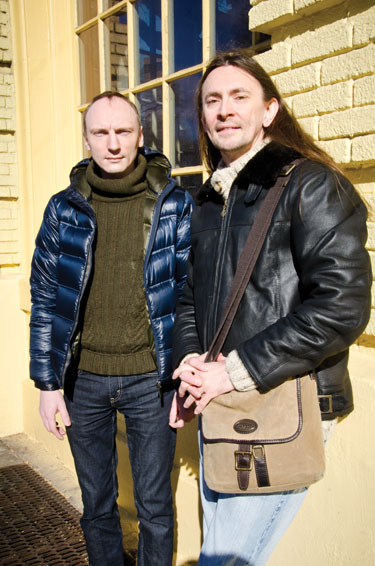 (Photo by Photo by Julian Vankim)

Still, even with the stories like these – along with a mood exemplified by high-profile Russian TV actor IvanOkhlobystin calling for gays to be burned alive for the sake of protecting his children – some say the worst is yet to come.

In an interview published Jan. 18, for example, lesbian journalist Masha Gessen, who is Russian-American, told Canada’s Mclean’s magazine, “I have come pretty much full circle, from optimistic to despairing. I’ve sold my home and left [Russia], which is a clear indication. I expect things to go on as they are for a long time and, the longer they go on, the worse it will be when the Putin regime finally ends. This kind of crackdown – on politics, on expression – has specific consequences: People leave the country, sell out, or just give up, and the potential for anything constructive decreases with every passing day.”

Viacheslav “Slava” Revin, 31, is one of those people. A gay, HIV-positive, political activist targeted by Russian authorities, he’s been in the U.S. since July. In D.C., he awaits word on his asylum application. While that application may leave his future uncertain, he’s as confident as Gessen that things are going to get worse in Russia, particularly with the departure of all the Olympics-related media.

So is Larry Poltavtsev, executive director of Spectrum.

“You always should expect things to get worse in Russia,” Poltavtev says with bitter laugh. “And especially after the Olympics.”

Notably, the buildup to the Olympics has seen numerous LGBT-supportive efforts. America’s largest LGBT-rights organization, the Human Rights Campaign, made its first donation to the Arcus Foundation-affiliated “Russia Freedom Fund,” $100,000. The global All Out organization has organized several petitions and FCKH8 sent gay-affirming coloring books to Russia.

The Russian crackdown on the LGBT community has certainly gotten the attention of American activists. Still, some might wonder, “Why Russia?” There are countries with worse records on treatment of LGBT people. Even Revin began his political activism by protesting Iran’s executions of gays at that country’s embassy in Moscow.

“Don’t forget Kazakhstan,” warns Revin, before ticking through a list of countries in Russia’s orbit. “In Armenia, in Ukraine, in Belarus, they want new [anti-gay] criminalization. And Russia is G-8. Jamaica? No.”

With that worldview – one that finds human-rights abuses fostered by Vladimir Putin’s government leading to even greater abuses elsewhere – Poltavtsev offers three strategies. “We’d like the State Department and the administration to authorize a blanket immigration program for LGBT asylum seekers from Russia, similar to what we had for Soviet Jews,” he says, granting that streamlined immigration might be appropriate for LGBT people from several other countries as well.

Next, he points to expanding the so-called Magnitsky Act, which allows for barring entry into the U.S. and banning use of American banking systems, to include the Russian politicians – and others – behind the new anti-LGBT law: “No visas for human-rights violators.”

Poltavtsev’s third suggestion is rooted in his information-technology training.

“We have huge influence over Russia,” he insists. “It’s time to put our foot down and tell them ‘No!’ We don’t buy their gas and oil. We don’t care. But guess what? They are 100 percent dependent – the entire country, the infrastructure – on our information technology hardware and software. Their railroad system, their energy system, even their military systems, from the postal office to the pizza office, are running on American hardware and software. … The software becomes obsolete even faster than the hardware. You turn off the automatic updates here, and they will slowly march toward the Stone Age – unless they talk to us.”