Even so, Peyton is quick to add, venues are not a party’s be all and end all.

After all, the Black Party has not only survived the 1988 closure of its original venue, New York’s legendary gay club The Saint, it has truly thrived. The rite has become legendary in its own right. Now turning 35, this leather/fetish party, celebrating the start of spring and produced by the Saint-At-Large organization, draws upwards of 5,000 revelers annually to New York. 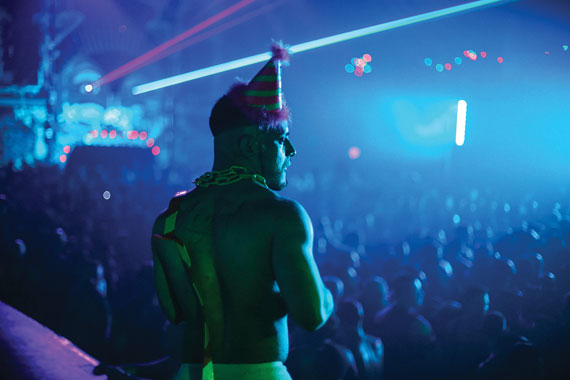 (Photo courtesy of Saint at Large)

But earlier this year developers announced plans to raze Roseland with the intention of building condominiums. That will make the venue in the heart of Manhattan’s theater district yet another nightlife victim of the city’s endless parade of gentrification.

Though not before one last party.

”There were a lot of memories made in that place for the gay community, both magical and maybe scandalous as well,” Peyton says, adding, ”The burden is on us to put together a show that’s worthy of the last year at Roseland.”

This year’s party, with a theme drawing inspiration from India but also paying homage to its ”ruined paradise” home venue, will feature the kind of ”strange live acts” the party has become notorious for — chiefly, live fetish porn shows. DJs Jason Kendig of San Francisco’s Honey Soundsystem and ”nd_baumecker” of Berlin will kick off a night of underground progressive house music, followed by back-to-back sets from sunrise-welcoming headliners Boris, a classic New York big-room DJ, and Tom ”Superchumbo” Stephan, the gay London-based DJ returning to the Black Party for a second year in a row. New York’s Nita Aviance will then takeover late morning until the party’s afternoon close.

Especially over the past decade, however, the Black Party has become more than just one singular Saturday night venture. In fact, it’s now the biggest party weekend in the Big Apple outside of Pride the last weekend in June. This year Peyton and Stephen Pevner, Saint-At-Large’s executive producer/owner, have partnered with Out NYC to be the weekend’s official host hotel and also site of three events, including ”24 Years at Roseland: Electronic Installation & Photography Exhibition.” This special exhibition, which runs Wednesday, March 19, to Monday, March 24, will display original posters and rare images from the parties the Saint-At-Large has thrown at Roseland since 1991. Also on tap at Out NYC: The 8th Annual International Escort Awards, ”The Hookies,” on Friday, March 21, and a ”fine and frisky” Black Party Brunch, on Saturday, March 22.

Further confirmation of the Black Party as a full weekend fetish-party affair: On Sunday, March 23, Ric Sena will throw the 14th annual ”Alegria Xtreme,” a special edition of his famed party Alegria. ”Xtreme is always about edgy,” Sena says, noting that this year’s party at New York’s historic Webster Hall revolves around a military theme. ”Boys like to dress up,” he says, laughing. ”It’s a good excuse to put on camouflage.”

This March edition of Alegria is also a toast to its resident DJ, Abel Aguilera. ”Xtreme always celebrates Abel’s birthday,” says Sena, noting that the gay circuit’s best and most popular DJ will be turning 51 this year. In addition to the usual surprise ”diva” performer, Sena has also tapped the great, emerging house DJ Pagano, from Italy via England, to kick off the event this year as he did last. Also worth noting about Black Party Weekend 2014: Viva Saturdays, the weekly party Sena throws with fellow promoters John Blair and Betto Sutter, will celebrate its one-year anniversary. DJ Paulo will once again spin his signature sexy tribal sounds for the party, held at Stage 48.

As for the weekend’s main attraction, Peyton wants to reassure fans: The party will go on and on. Roseland’s closure ”is something that we’ve been anticipating for many, many years [and] I think we’re in a really good position to make the transition,” he says, adding for further emphasis: ”This is the last Black Party at Roseland, not the last Black Party.”

The Black Party is Saturday, March 22, starting at 10 p.m. at New York’s Roseland Ballroom, 239 West 52nd St. Tickets are $165 in advance, or $180 at the door. Visit blackparty.com for full details on this and all related events.