Ward 4 councilmember romps in LGBT-heavy precincts on way to victory, while Graham loses to Nadeau in Ward 1

By John Riley on April 3, 2014 @JohnAndresRiley

District voters went to the polls April 1 to select nominees from each of the city’s four major political parties for various offices in this November’s general election, turning incumbent Mayor Vincent Gray and four-term Councilmember Jim Graham (Ward 1) out of office in their respective Democratic primaries.

Gray, who has been the target of a federal investigation looking into a shadow campaign during the 2010 mayoral election, was frequently under attack and had flat-lined in polls following a plea deal with businessman Jeffrey Thompson, who pleaded guilty to directing illegal campaign contributions into a Gray shadow campaign and claimed Gray had known of the plan. Following Thompson’s plea deal, Gray’s chief rival, Councilmember Muriel Bowser (D-Ward 4) surged, consolidating the support of a number of anti-Gray voters who had previously considered other candidates until polls showed Bowser breaking away from the pack of challengers. 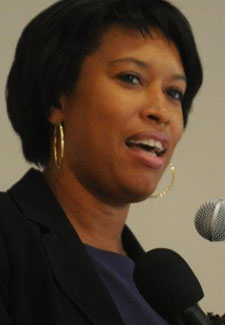 Bowser triumphed over Gray by a 12-point margin, 44 percent to 32 percent, and won five of the city’s eight wards, including her home base of Ward 4 and majority- or plurality-white wards west of Rock Creek Park and in the city’s downtown and U Street corridors that had backed former Mayor Adrian Fenty (D) four years ago. Gray won three majority-African-American wards – Wards 5, 7 and 8 –largely on the east side of the Anacostia River. Based on results from the D.C. Board of Elections, Bowser also appears to have won handily in wards with high concentrations of LGBT voters.

According to the Williams Institute, a UCLA School of Law think tank conducting research on sexual-orientation and gender-identity laws and public policy, the 2010 Census shows tracts with more than 20 same-sex couples per 1,000 households overlapping all or parts of 43 voting precincts in the District. Bowser won 36 of those 43 precincts, some by lopsided margins.

Gray won in Precinct 20, a Ledroit Park precinct, and at Precinct 18, in the city’s Shaw neighborhood. He also won three precincts – 67, 69 and 70 – in the city’s Brookland and Michigan Park neighborhoods. Councilmember Tommy Wells (D-Ward 6), who came in third overall with 13 percent of the vote, won two other precincts, 90 and 90, located near his Capitol Hill base.

Overall voter turnout for the primaries was sluggish at many locations. Fewer votes were cast this year than were cast four years ago at every precinct in the city. Overall, voter turnout citywide was estimated at 22.5 percent, with turnout in some individual precincts dropping as low as 8 percent.

Bowser now heads into the November general election as the presumptive favorite in a city where almost three-quarters of voters identify as Democrats. She will face gay Councilmember David Catania (I-At Large), who announced his candidacy earlier this month, as well as Libertarian Party nominee Bruce Majors and Statehood Green Party nominee Faith Dane Crannitch, who appears on the ballot as ”Faith.”

In the D.C. Council races, incumbent Chairman Phil Mendelson and Councilmembers Anita Bonds (D-At-Large), Mary Cheh (D-Ward 3), and Kenyan McDuffie (D-Ward 5) won their respective primaries, while Graham, one of only two out gay men to ever serve on the D.C. Council, lost his bid for re-election to challenger Brianne Nadeau. In the race for the Ward 6 seat being vacated by Wells, Wells’s former chief of staff, Charles Allen, defeated former U.S. Senate staffer Darrel Thompson in the Democratic primary.

Following her victory in the Ward 1 race, Nadeau gave a speech before supporters at Solly’s U Street Tavern in the early morning hours Wednesday, April 2, in which she thanked Graham for his 15 years of service on the Council, despite a tough and, at times, heated campaign between the two.

”Tonight we’re celebrating all the people of Ward 1, because we built this campaign with their voices in mind,” Nadeau said. ”This campaign has never been about me. You’ve heard me say that before, and I mean it. This is about the people of Ward 1. … And now what we’re going to be able to do is take all these voices to the Wilson Building!”

Mendelson and McDuffie will run unchallenged in the general election, while Cheh faces Libertarian nominee Ryan Sabot and Allen faces Libertarian nominee Pranav Badhwar in their respective races. Bonds, as an At-Large member, will face three challengers – Republican Marc Morgan, Statehood Green nominee Eugene Puryear, and Libertarian Frederick Steiner – in a contest where the top two vote-getters are elected to the D.C. Council. 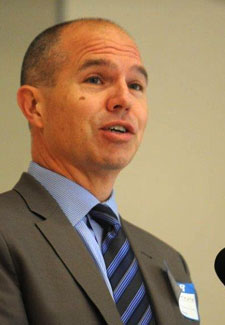 While some political observers have expressed dismay over the prospect of a Council without any openly gay councilmembers, should Catania continue with his mayoral run and following Graham’s defeat, the hand-wringing may be premature, as Morgan, a gay African-American and current ANC commissioner from Ward 1, stands a good chance of getting elected if he is able to mobilize a small but dedicated base of voters who can get him enough votes to come in among the top two vote-getters.

At the polls, many voters expressed disappointment or anger with Gray, saying they felt the city needed a change in leadership. Fred Bowell, 56, and his partner, Doug Anderson, 47, both told Metro Weekly they were driven to the polls by their dislike of Gray and a ”throw the bums out” attitude. Both men said they voted for Bowser in the U Street corridor’s Precinct 22. The also both voted for Mendelson for chairman, but split their votes for At-Large and Ward 1 councilmember. Bowell voted for Anita Bonds and Jim Graham, while Anderson picked their respective challengers, Nate Bennett-Fleming and Brianne Nadeau.

”I just don’t think Nadeau has enough experience for me to vote for her,” Bowell told Metro Weekly. ”I look at whether a person has experience in government, not just business. That’s what kept me from supporting Andy Shallal,” he said, referring to the local businessman and restaurant owner who came in fifth place in the mayor’s race with 3 percent of the vote.

Asked which candidate was the best on LGBT issues, Anderson said that all the mayoral candidates were the same.

”It’s kind of a given,” he said. ”Maybe we’re complacent, but I think someone who was vocally anti-gay wouldn’t go very far in the city.”

Mark Mastro, 41, who also voted at Precinct 22, did not want to share his choice for mayor, but did say he voted for Graham in the Ward 1 race, though he noted that even competitive elections such as that race were greatly overshadowed by the mayoral campaign.

Although Mastro is a registered Democrat, he has fiscally conservative leanings, which he said would make him consider voting for Catania. In all interviews conducted on Tuesday by Metro Weekly at various precincts throughout the city, every Democrat polled – regardless of which candidate they were supporting in the primary – said they would at least consider a Catania candidacy.

Liam Toohey, 33, who does not identify as LGBT but is supportive of candidates who are LGBT-friendly, voted at Precinct 23 in Columbia Heights. Toohey said he eventually voted for Tommy Wells, though it was a decision that came with reservations.

”It’s tremendously important who gets picked, and I would hate to see a person win just because they got the most people to the polls,” Toohey said, adding that he wanted to vote for a candidate who would support issues he cared about, such as education, small-business development, libraries and parks, and advocating that Virginia and Maryland contribute more funds to the operation of the Washington Metropolitan Area Transit Authority.

”I wasn’t sure of who I’d vote for,” Toohey said. ”I almost voted for Gray, because I’d prefer him over Bowser.”

Toohey also said he voted for Mendelson, Bonds and Nadeau in the down-ticket Council races, though he also said he was ”less invested” in his vote for Bonds.

Toohey said that if Bowser were to win, he’d consider voting for Catania in the general election.

”As a Wells voter, there are enough issues that he was speaking to in his candidacy that the others weren’t, and whoever addresses those issues is most likely to get my vote.”

As results began to trickle in late in the night due to delays at the D.C. Board of Elections, it became apparent that Bowser had staked out a substantial lead over Gray, bringing smiles to the faces of Bowser supporters and disappointing many LGBT voters, particularly transgender women of color, many of whom see Gray as their only outright champion in city government. Several transgender voters organized a ”get out the vote” campaign via word-of-mouth and social media to encourage transgender voters to cast their votes for Gray during the city’s early voting period.

”We have lost the best Mayor we ever had,” she continued, referring to Gray’s advocacy on behalf of the transgender community, such as launching a program to help transgender people receive job training.

Lane Hudson, a local LGBT activist and one of the co-chairs of ”Gray Pride,” the Gray team’s LGBT outreach effort, posted a statement on Facebook following his candidate’s loss.

”I am still proud of my mayor,” Hudson wrote. ”He is one of the best public servants I have ever known. I will be taking some time to figure out my next steps. Will be listening very closely to what Muriel Bowser says and does to bring our party together, and also curious of the tone and approach that David Catania brings to this race.”

In her victory speech, Bowser congratulated her supporters and campaign team, and extended an olive branch to supporters of other candidates, praising Wells, Reta Jo Lewis, and Councilmember Jack Evans (D-Ward 2) and vowing that Democrats would be ”united” for November’s election.

”I promised then, as I promise now, that I would run a campaign of integrity, of vision, and energy, and inclusion,” Bowser said. ”I promised that our campaign would reflect the collective values of all of us in all eight wards.”

Bowser supporters were ecstatic about her win.

Sean Wieland, who worked on previous Bowser campaigns for Ward 4, called Bowser an ”effective leader who always considers the needs of every resident,” listing her accomplishments during her time on the Council.

”I am over the moon that she won,” LGBT activist and longtime Bowser supporter Christopher Dyer said of Bowser’s victory. ”I think that her vision for D.C. voters is positive, and it was great to see that the voters responded to her.”

Catania congratulated Bowser on her victory in an interview on Fox 5, but quickly transitioned into framing the general election as a choice rather than a referendum or a rubber stamp for a particular political party, foreshadowing his pitch to voters in the upcoming general election campaign. He also said the low turnout in Tuesday’s election was ”not really an endorsement of the process, or candidly, the candidates.”

John Riley is the local news reporter for Metro Weekly. He can be reached at jriley@metroweekly.com
← Previous Story Andrew Barnett’s Goodbye
Next Story → Next Gen Nominations Open