“Jason has always maintained he’s first a basketball player. He is. But he’s also a leader and an inspiration. For Michael Sam, Derrick Gordon and others whose names we may never know.” 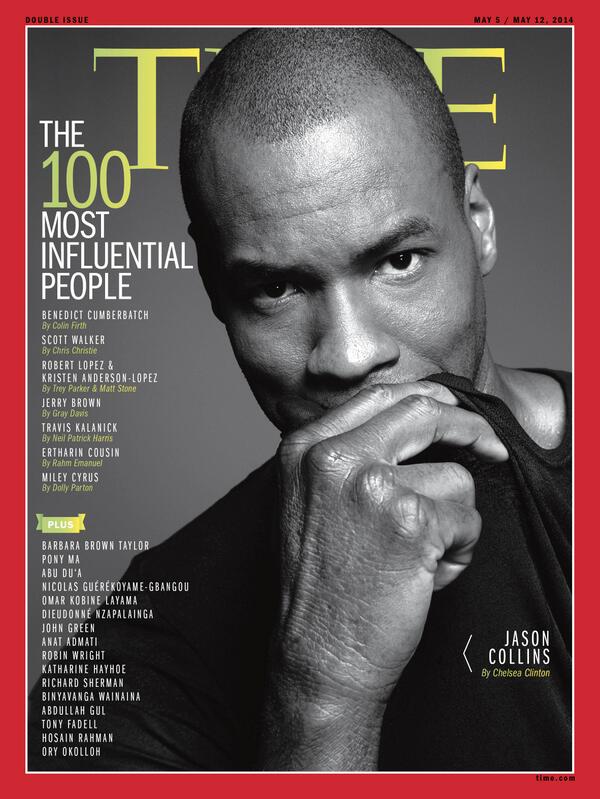 — An excerpt from Jason Collin’s testimonial, written by Chelsea Clinton, as part of his inclusion in TIME Magazine’s list of the “100 Most Influential People of 2014.” Collins came out last April in an interview with Sports Illustrated, saying: “I’m a 34-year-old NBA center. I’m black. And I’m gay.” After signing a 10-day deal this year with the Brooklyn Nets — which was later extended to the end of the season — Collins became the first active, openly-gay athlete in any of the four major league professional sports.

Clinton met Collins during her first year at Stanford, writing: “Not surprisingly, the first thing I noticed was his height. The second thing I noticed was his kindness off the court — and his fierceness on it. Kindness to his friends, his family and fans. Fierceness in his drive to win.” Clinton’s mother, former Secretary of State Hillary Clinton, was also included in TIME’s list.

This is cool. Thank you @TIME. “TIME’s list of the world’s most influential people #TIME100 http://t.co/7O8E1aYhS7 pic.twitter.com/pfz5fgZHI1”

Rhuaridh Marr is Metro Weekly's managing editor. He can be reached at rmarr@metroweekly.com.
← Previous Story USPS reveals design for Harvey Milk stamp
Next Story → Dolly Parton: Let gay couples marry so they can suffer like heterosexuals