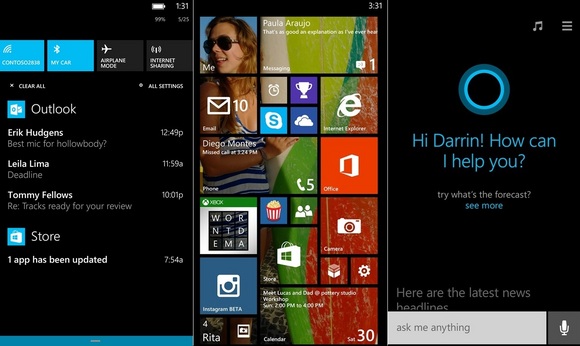 Okay, confession time: I really like Windows Phone. I know, I know, we’re not supposed to, we’re supposed to be sheep and like iPhones and Galaxy devices, but there’s something about Microsoft’s smooth, fluid, blocky OS that has always appealed to me. What it hasn’t been able to do, however, is hold my gaze. Every time I jump in to experience its gorgeous animations, slick Live Tiles and great UI, it doesn’t take long for the missing features and little quirks waiting to be ironed out to lead me back into Android’s cold, powerful embrace.

Well, good news everyone! Today, Microsoft’s Joe Belfiore took to the stage at the company’s Build conference to announce Windows Phone 8.1, an update to the OS that will finally elevate it into some kind of parity with its Android and iOS rivals.

The biggest announcement comes in the form of the oft-rumored and frequently leaked Cortana, Microsoft’s voice assistant rival to Google Now and Apple’s Siri. Named after a character in Xbox videogame Halo, who was herself a personal assistant of sorts to main character Master Chief, it will offer many of the functions that users of other systems have grown accustomed to. It’s still very much in beta — much like when it first launched — but what Microsoft has so far is impressive. It replaces the Bing Search functionality that previously existed, and of course offers the usual Bing voice and text searches and music recognition that was already there. In addition, users can now make calls, take notes, send messages, set alarms and reminders and integrate with third party apps. Want to queue a show on Hulu to watch later? Just tell Cortana to do so. Feel the urge to shout to all your friends about how delicious your meal is? Cortana will happily post to Facebook for you.

Cortana will interact with you as naturally as Google Now and Siri, meaning common language can be used. Belfiore asked Cortana “What’s up with Terry Myerson?” and she pulled in his profile page for instant viewing. Give her access, and she’ll learn your habits and preferences, just like Google Now. If Cortana detects a flight confirmation in your email inbox, it will be displayed as a reminder, while any searches will be remembered to pull in relevant data and offer suggestions. Furthermore, third-party integration will offer multiple ways of completing a task — if you’d like to call someone but want to use Skype, just tell Cortana and she’ll launch the app and connect the dots.

Cortana is a core function of the new OS, but it’s not the only new feature on offer. Another must have feature that originated on Android and made its way to iOS is a notification center, accessed by swiping from the top of the screen. Dubbed the Action Center, it’ll feature the requisite toggles for switching WiFi, screen rotation, brightness, Bluetooth and other such functions, as well as throwing notifications up for users to browse through and dismiss at their leisure.

Windows Phone’s start screen has been given an overhaul. Users can now set an image to show under tiles which use the default theme — it isn’t a wallpaper as such; instead, the tiles appear like a window, looking down onto the image. It’s a neat effect. Also on board is a revamped app store, which will automatically download new updates, offer better suggestions for new apps and let users better manage their downloaded content. The Calendar has gained a weekly view and now shows the weather for each day. Wi-Fi Sense will streamline the process of connecting to networks — it’ll recognize dependable networks like Starbucks WiFi and automatically accept any terms of conditions, letting you jump straight into browsing.

Swipe functionality is now embedded in the keyboard, which lets users trace over letters rather than type them individually — a welcome addition for those used to the feature on Android phones. Lastly, business users are heavily catered for this time around: VPN support is here, as are signed and encrypted messages, which should help make corporate espionage that little bit trickier.

Windows Phone 8.1 devices will launch in the coming weeks, while Microsoft has promised that all current Windows Phone 8 Lumia devices will be updated to the new software. All-in-all, it’s a broad range of updates — not all of which are listed here — and should help stop shots from iOS and Android fanboys that Windows Phone is lacking some essential features. We’ll have to reserve judgement until we get our hands on the full update, but for now, this writer can’t wait to see what his Lumia 1520 looks like dressed in Windows Phone 8.1.