Scanning Dr. Carl Streed Jr.’s résumé is a bit like looking at Lake Michigan, on whose shores his Illinois hometown sits. Both are vast, impressive and life-sustaining. But before the 28-year-old was at his current post, practicing medicine at the Johns Hopkins Bayview Medical Center, he was a boy on a bridge. A boy who brought himself to that bridge to jump.

“Fifteen years ago in summer, I was hanging off the edge of a bridge thinking when I would let go, because I had a very difficult time growing up at that point,” Streed shared with an audience on Hopkins medical campus in April 2013 as part of The Stoop Storytelling Series. “It was around that time that I recognized that I was gay, was homosexual. I grew up in a town called Zion, which was very religious…. 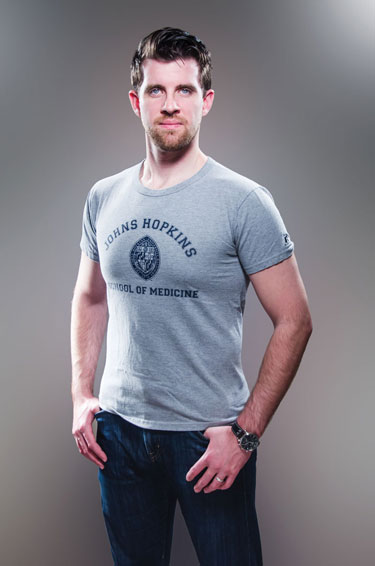 “So, 15 years ago, I was hanging off a bridge. I didn’t know where to go at that point. To this day, I still can’t figure out what possessed me to actually crawl back over the railing. But I did. And I came up with a very solid plan of how to get out of my town: I’m going to do very good in school. I’m going to get into a really good college, and then I’m never going to look back.”

Two out of three ain’t bad.

Streed did very well in school, got into the University of Chicago, then the Johns Hopkins School of Medicine. But he does look back. Indeed, he returns to Zion regularly, where his parents are fully aware and accepting of his sexual orientation and of his fiancé, Chad.

“He called my fiancé his other son,” Streed says of Carl Sr., who goes by the name “Butch,” is a Vietnam veteran, was in a motorcycle gang and worked as a lumberjack. “It’s full acceptance. It’s a complete 180 from anything he was or anything I expected. My mom was always very quietly accepting. I didn’t have to convince her.”

It would be hard for Streed’s parents not to be proud of their son, the doctor. Returning to that résumé, it’s replete with honors. There’s the mention of Streed as an honoree at the White House Celebration of the Next Generation of LGBT Leaders. Or the James Slayton Leadership National Award for Leadership Excellence from the American Medical Student Association. And so on. There’s plenty for his parents to be proud of. Actually, there’s so much that an entire community can take pride in one of its members being so dedicated, so accomplished and so caring. As Streed sets his mind to the coming years of his career, the LGBT community may be collectively confident that he’ll make great strides in bringing some cultural competency to the field.

“I still hate doctors, we’re the worst,” he deadpans, though remembering some genuinely dismissive treatment he once received from a doctor who seemingly equated gay with HIV. “I’m still frustrated with the care I received, but I have become a little bit more sympathetic to recognizing a pattern and immediately jumping to a diagnosis. I don’t think it’s right, but I see that as something that kind of happens in training. I come up against resistance like, ‘We treat everybody the same.’ But our cultural competency is lacking when we jump to assumptions, jump to diagnoses. Overall, I’d give us a grade of passing. … It’s hard to improve, but we’re improving. I think the amount of institutional inertia within the medical community is enormous. The inertia is ridiculous.”

In the meantime, Streed still has his daily responsibilities, managed down to the minute with the help of Google Calendar. Perhaps not a medical prognosis, but Creed guesses that if that online organizer were to cease, he would die. In all seriousness, though, death is a regular part of Streed’s job.

“Day to day changes from week to week, but I’m presently working in the medical intensive care unit,” he explains. “Every so often I need to pronounce someone dead. I did that yesterday. It’s reassuring that I still get choked up having to tell the family about that. I dread the day I ever become so callous that I don’t care when somebody passes.”

Helping stave off callousness is the aforementioned Chad, whom he met during a brief night out in Chicago, stopping at Sidetrack – where he once worked as security – for a drink. As Streed recalls, Chad wooed him with discussion of the Affordable Care Act. And while they’ve not yet set the date, the couple, both coming from two-child homes, have already discussed children and seem to have settled on someday adopting two.

As for that child hanging from bridge, contemplating an end to it all, one wonders what message the 28-year-old Dr. Streed might have for him and other young people struggling.

“I’d say, ‘Don’t let them win. Don’t let the people bringing you down succeed. Just by moving forward, you’re already doing a lot more than they have.’ It gets better – as long as you keep working hard.”