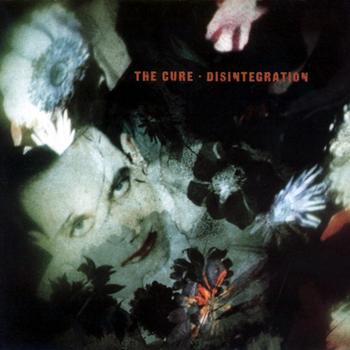 By the end of the ‘80s, The Cure was poised for success in America. Their 1987 double-album Kiss Me, Kiss Me, Kiss Me sold well, and their now-classic single “Just Like Heaven” was a huge college radio hit and even grazed the Top 40 on the pop chart. “Why Can’t I Be You?” and “Hot Hot Hot!!” were also sizable hits at college radio and all three singles received significant MTV airplay. They were playing to bigger and bigger crowds. The stakes for their next album were huge; fortunately they delivered a masterpiece. Disintegration, released 25 years ago today, is an enduring classic; it’s one of the most acclaimed albums of the ‘80s.

Preceding the album by a few weeks, the first U.S. single from Disintegration was the mesmerizing “Fascination Street” (“Lullaby” was the choice in Europe and around most of the world). A darkly psychedelic track of colossal dramatic power, “Fascination Street” became an immediate hit, rocketing to #1 on the Billboard Modern Rock chart. It’s notable for Simon Gallup’s thunderous bassline and a kinetic rhythm played with razor-sharp precision by drummer Boris Williams, over which Robert Smith’s shimmering guitar and multiple intricate layers of Roger O’Donnell’s keyboards combine and build to an incredibly powerful climax. Robert Smith delivers the song’s enigmatic lyrics with a burning intensity. “Fasincation Street” was a tantalizing first taste of what was to come.

Fans beguiled by the brilliant first single were not disappointed when the album arrived on May 2, 1989. It was widely praised upon release, and it handed the band their highest placement yet on the U.S. album chart (#12). Disintegration is generally regarded by fans and critics to be The Cure’s creative pinnacle. After three albums in a row that lurched back and forth between euphoric pop and more somber material, the band returned to the much darker vibe of their Seventeen Seconds, Faith and Pornography years — but now they were much better musically, and Robert Smith had grown in leaps and bounds as a songwriter. The end result is an album that is cohesive and dramatic, with a deeply contemplateve and often morose vibe. Disintegration is majestic in scope and feeling, and fans around the world remain drawn to its emotional power.

The album opens with several seconds of faintly shimmering chimes until a stately, majestic wall of synthesizers flood out of the speakers and “Plainsong” begins in earnest. A simple, elegant guitar pattern slowly unfolds, and then, 2:38 minutes into the song, Robert Smith’s ghostly voice appears for the first time, suffused with echo and swimming in the symphonic grandeur. There couldn’t be a more perfect opener. Next comes the wistful “Pictures of You,” a song steeped in regret and longing. It stretches over 7 minutes, with long, stately passages of guitar. An edited version became the final single from the album, and a video was filmed with the band performing in the snow. The melancholy “Closedown” follows with icy synths and a booming bass and drum pattern reminiscent of the Pornography era. About midway through the song, Smith dolefully sings one poetic stanza fraught with hopelessness, ending with the plaintive “If only I could fill my heart with love,” before giving way once again to the thunderous rhythm and the wash of keyboards.

Beginning with a bright slash of guitar, the brilliant “Lovesong” is built on an insistent, steady beat, a wildly florid bassline and a mournful keyboard riff over which two distinct guitar countermelodies duel for supremacy between the verses. Smith delivers the devotional lyrics (dedicated to his wife) with an earnest sincerity. “Lovesong” was released as the album’s second single and became The Cure’s biggest crossover pop hit in the U.S. by a wide margin. It climbed all the way to #2, unable to dislodge Janet Jackson’s “Miss You Much” from its 5-week reign at the top. “Lovesong” is a classic that stands as one of the band’s greatest singles.

“Last Dance” is next, a turbulent rocker with another gripping vocal by Smith. It has a piercing desperation that comes through not only in the vocals, but in the tumultuous wash of guitar and the ominous bursts of keyboard. Then it’s on to the wonderfully creepy “Lullaby”, a brilliantly conceived track that features multiple guitar and keyboard lines that wrap around each other like pieces on a Tetris board, with Robert’s obsessed and maniacal half-whispered vocals floating above like a spectral mist. Released as the 3rd single in the U.S. just in time for Halloween, “Lullaby” did well at alternative radio but was just too unconventional (or spooky) for Top 40 stations, and it was unable to replicate the crossover success of “Lovesong.” It was, however, a massive hit in the U.K. and throughout Europe, and it remains one of the band’s quintessential tracks.

Disintegration’s second half opens with “Prayers for Rain,” a song pulsing with anguish. It begins with a long foreboding instrumental section before Smith unleashes an increasingly venomous and accusatory torrent, his voice dripping with loathing. It leads into what is arguably The Cure’s masterpiece. “The Same Deep Water as You” unfolds slowly with towering beauty and grandeur. The 9+ minute epic opens with the sound of rain and thunder, from which somber guitar and ethereal synthesizers emerge. Robert Smith’s vocals are nothing short of stunning; deeply felt and sublime. The quietly intense “The Same Deep Water as You” and the edgy, hard-rocking title track back-to-back form the emotional heart of the album. Opening with the sound of shattering glass, “Disintegration” is a long, cathartic freak-out with each verse progressively more manic as it all hurtles towards its torrential climax like a giant boulder crashing down the side of a mountain. It ends with Robert wailing “Both of us knew how the end always is… how the end always is… always…”

The album’s final two tracks are the perfect epilogue. The pensive and reflective “Homesick” opens with a long and gorgeous interwoven guitar and piano introduction which eventually leads to a plaintive and heartsick verse sung by Smith in his lower register. Like most of the tracks on Disintegration, it builds in power and tension as it goes. The finale is the beautiful “Untitled,” which seems to sum it all up: “Never quite managed the words to explain to you. Never quite knew how to make them believable. And now the time has gone. Another time undone.” The album ends with the dispirited couplet, “I’ll never lose this pain. Never dream of you again.”

Disintegration has had a massive cultural impact over the years. For an entire generation of fans who came upon the album during their high school or college years, it’s the soundtrack to some of the most important years of their lives. Fans dove into the thick, hypnotic blanket of sound and Smith’s lovelorn epics obsessively. The album’s acclaim has only grown in the quarter-century since its release, and it remains The Cure’s biggest-selling album worldwide. Disintegration is one of the cornerstones of alternative rock — an iconic, beloved album that holds a deeply ingrained significance for fans all over the world. Even its b-sides (“Babble,” “2 Late,” “Out of Mind,” and “Fear of Ghosts”) are stellar. In 2010, the band issued a 2-CD deluxe edition of the album. The second disc contains a wealth of unreleased material, from demos of album tracks to pieces that were never complete, like the wonderfully psychotropic “Delirious Night.” It’s an excellent reissue worth the expense of picking up. Disintegration is an album for laying back, turning off all the lights, and letting it unfold in its entirety from start to finish. Now that a quarter-century has gone by, it’s a good time to revisit one of the greatest albums of our generation.