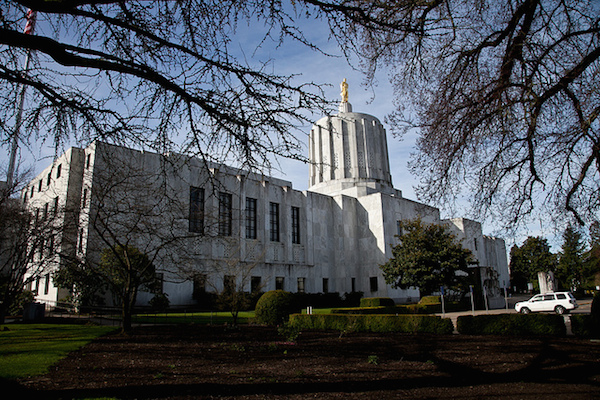 A federal judge struck down Oregon’s same-sex marriage ban, declaring the law unconstitutional in a ruling handed down Monday.

“Because Oregon’s marriage laws discriminate on the basis of sexual orientation without a rational relationship to any legitimate government interest, the laws violate the Equal Protection Clause of the Fourteenth Amendment to the United States Constitution,” U.S. District Court Judge Michael J. McShane wrote. Oregon voters approved a constitutional amendment in 2004 defining marriage as between a man and a woman.

McShane, who was appointed to the bench by President Barack Obama and is the first openly gay federal judge in Oregon, wrote that he is aware there are many in Oregon who have a religious or moral objection to expanding the definition of civil marriage to include same-sex couples.

Accusations of religious bigotry and banners reading ‘God Hates Fags’ make for a messy democracy and, at times, test the First Amendment resolve of both sides. At the core of the Equal Protection Clause, however, there exists a foundational belief that certain rights should be shielded from the barking crowds; that certain rights are subject to ownership by all and not the stake hold of popular trend or shifting majorities.

My decision will not be the final word on this subject, but on this issue of marriage I am struck more by our similarities than our differences. I believe that if we can look for a moment past gender and sexuality, we can see in these plaintiffs nothing more or less than our own families. Families who we would expect our Constitution to protect, if not exalt, in equal measure. With discernment we see not shadows lurking in closets or the stereotypes of what was once believed; rather, we see families committed to the common purpose of love, devotion, and service to the greater community.

Where will this all lead? I know that many suggest we are going down a slippery slope that will have no moral boundaries. To those who truly harbor such fears, I can only say this: Let us look less to the sky to see what might fall; rather, let us look to each other … and rise.

The decision is the latest in a string of federal and state court wins for same-sex marriage following last June’s sweeping U.S. Supreme Court decision in U.S. v. Windsor — striking down the federal government’s definition of marriage as between a man and a woman. Since then, 12 federal courts have ruled in favor of marriage equality in Utah, Ohio, Oklahoma, Kentucky, Idaho, Illinois, Indiana, Michigan, Tennessee, Texas and Virginia.

Unlike many of those cases, however, state officials in Oregon have stated they will not appeal McShane’s decision, which is effective immediately. The National Organization for Marriage (NOM) had sought to intervene in the case to defend the state ban in federal court but were denied that request by McShane. NOM appealed to the 9th Circuit Court of Appeals and, prior to today’s decision, requested an emergency stay to prevent marriages from beginning in Oregon. NOM’s request for a stay was denied by the appellate court earlier today but their appeal is still pending.