Hassan Naveed: The Next Generation Awards 2014

Hassan Naveed has always been on the go, whether in terms of geography or activism.

Since graduating high school, the California native has done stints as a community organizer and radio reporter in Santa Barbara, as a labor and political organizer in Oakland and San Francisco, and with a D.C. public relations firm focused on civil rights. This summer, he leaves D.C. to pursue a master’s degree in public administration at New York University’s Wagner Graduate School of Public Service. 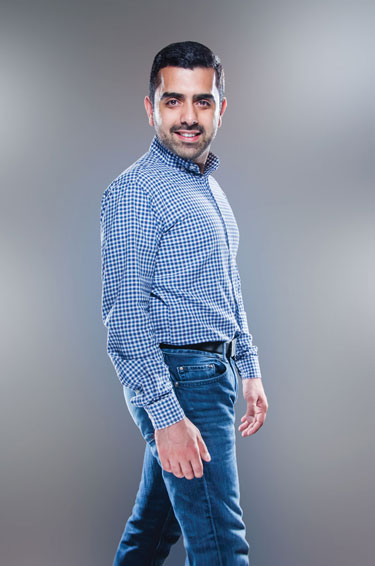 Naveed has also made a name for himself locally with his involvement in Gays and Lesbians Opposing Violence (GLOV), a program of The DC Center for the LGBT Community, which works to respond to and prevent hate crimes, particularly against members of the LGBT community. And last year, he was honored by Capital Pride with the Engendered Spirit award for his GLOV advocacy on behalf of the transgender community.

“GLOV has a community partner in New York City, the Anti-Violence Project, that we’ve engaged with. They’ve said, ‘Oh, you’re coming to New York City? We’d like to get you on some volunteer projects,'” he jokes. “I can’t sit still.”

Naveed’s involvement with GLOV goes back to 2010 and his first weeks after making the move from the West Coast. He met The DC Center’s Executive Director David Mariner, who then introduced him to several local activists. Soon after, Naveed joined GLOV, later becoming the group’s secretary and then one of its co-chairs. He’s also a board member with D.C.’s Casa Ruby, which provides services to members of the city’s transgender and immigrant communities.

“Drawing back on my life, I had two of my really close friends who were victims of hate crimes in college,” the 28-year-old says when asked of why he chose to join GLOV. “To see how the incidents impacted their lives, and to realize the lack of resources that were available to them, in that space, as being folks who were LGBT and also from communities of color, really made me realize that hate exists in all forms – whether it’s discrimination or something that is violent. And from then on, I made a commitment to mitigate that hate to the best of my ability, not just for the LGBT community, but all communities that are underrepresented.”

Closer to home, Naveed and his family have been targets of hateful comments or other forms of bigotry, particularly right after 9/11.

“I was leaving a grocery store. A lady pulled me aside, grabbed me and began yelling at me,” he recounts. “She kept going at me, saying, ‘You Muslims come into this country….’ It wasn’t violence, but the impact that it had on me psychologically really made me feel like ‘What did I do wrong? I did nothing wrong.'”

“To see even my own family members and friends who were impacted by – we can call it discrimination – verbal attacks on folks, all the way to the fact that someone was pulled out of a cab in New York City and beaten up, a family friend, really made me see this issue as something I wanted to work on across lines, on LGBT issues, across lines of color,” Naveed continues. “And it’s something I grew passionate about. When I came to D.C., I knew I wanted to do something along the lines of antiviolence work.”

During Naveed’s tenure at GLOV, the organization undertook several initiatives, including attempts to better track violent incidents where anti-LGBT bias may have played a role, and improving relations between the LGBT community and the Metropolitan Police Department (MPD). GLOV also recently launched a hotline with Helping Individual People Survive (HIPS) to connect victims of violence to support services.

“My primary goal in GLOV was to make it an organization that people can look to for assistance, and also as an advocacy unit for all those communities in the city,” he says.

Earlier this year, GLOV and six other community partners – The DC Center, Casa Ruby, Rainbow Response, the Gay and Lesbian Activists Alliance (GLAA), the DC Trans Coalition and HIPS – joined to draft a response to a report issued by the Anti-Defamation League’s Hate Crimes Assessment Task Force that examined the relationship between MPD and the LGBT community. The task force had intervened to serve as a mediator at the request of MPD Chief Cathy Lanier following years of strained relations between the police and the LGBT community.

Naveed counts the task force and its recommendations, the majority of which were agreed to by both the community groups and Lanier, as a major accomplishment for the organization, but also as a potential building block for his successors.

“We’re finally engaging with the Police Department for the first time, directly, ever, and really building a plan that’s going to improve relations,” he promises. “We’re definitely in a forward trajectory. It’s going to get better.”

Naveed is also quick to offer praise to fellow D.C. activists, particularly Jeri Hughes, Casa Ruby’s Ruby Corado, Jason Terry of the DC Trans Coalition, and his GLOV peers for their contributions to the antiviolence movement. And he hopes to eventually return to the District, which he now sees as his adopted hometown.

“I might be physically gone from D.C., but I love this city a lot,” he says. “And, damn it, I’ve put my heart and soul into this city. I’ve poured myself dry. And I will be working on that plan with MPD in the years to come, because it’s something that’s been truly a passion of mine. So I will be involved in D.C. in some capacity, even though it will be different from the way it was before.”