From quartz countertops to abandoning cabinets, the recipe for your perfect kitchen is a matter of taste and trends 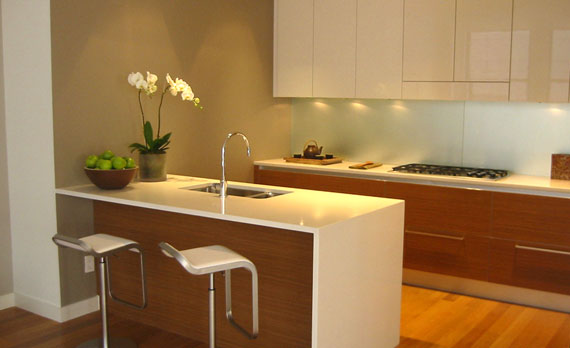 The functionality of the kitchen is a constant. Whether you’re zapping some popcorn, whipping up a baked Alaska or grabbing a glass of ice water, the kitchen beckons. Through the years, what that kitchen might look like has changed wildly. Appliances aside, there’s simply the look of the place. Colonial, at times, was hot, hot, hot, with reproduction butter churns all the rage and corn-husk accents on the walls. In other eras, the call was for ultra-modern – in avocado.

While these looks may well return – be ready for red, white and blue gingham kitchen accents in time for the U.S. tricentennial – we’ll save them for another day. Today, the trend seems to be for a sort of muted modern.

“Another trend, at both high and low end, is open shelves. In an existing kitchen, you can remove cabinets. I’ve seen some people do it very nicely just by removing cabinet doors and painting the shelves. It makes the kitchen look updated. It also makes the kitchen seem bigger. Your eye goes to the wall, so it feels like a larger, more open space.”

In other words, what’s hot in kitchens in 2014 isn’t just slow cookers, but a sort of open, uncluttered and calm aesthetic. At least, that’s what Delgado thinks – and he’s certainly got company.

That trend continues, says Hodges, to countertops, where yesterday’s go-to granite is being challenged by the new rock on the block – even in Hodges sees room for both, assuming the style is appropriate.

“With countertops, quartz materials are pretty hot right now,” he grants. “With granite, people are going with more antique finishes, not the shiny granite you’ve seen in the past.”

Delgado might also make room for granite, but it would be difficult to find a bigger booster for quartz countertops.

“I’ve always been a big fan of quartz countertops,” Delgado says. “They’re nonporous, never have to be sealed. There’s never an issue of bacteria getting into the stone. I first saw them in the states about 12 years ago. The product originated, to my knowledge, in Spain – Silestone. There’s also a company in Israel, Caesarstone. I like using it. I think more and more people are becoming aware of its existence. It comes in a variety of colors and looks. It’s priced comparably to granite.”

Whether quartz, granite or another surface altogether, those materials are ever more frequently finding themselves part of island life, with kitchen islands becoming a ubiquitous element of the contemporary kitchen. Chad Alan, of D.C.’s Chad Alan Designs, chose to top his own kitchen island with wood and make it a multifunctional element of his home.

“I created the island to also be the dining-room table,” Alan explains. “The first third of it is functional, but the remaining part is seating for the table. Islands are becoming pretty standard.”

A big fan of wood, Alan not only eats off it, but prefers to stand on it, too.

“I push for wood, because it’s easier on your back than standing on tile,” says Alan, while Hodges points out that it may in some circumstances be preferable to keep the tile floor, but copy the look with simulated-wood porcelain tile.

Surfaces, however, are not necessarily where Alan likes to focus his attention as he hones a design sensibility that can get quite unconventional – while remaining absolutely functional – when given room to play.

“The big thing I’m doing is putting TV’s on a swinging arm, flat screens,” Alan says of his current kitchens, lauding the flexibility of modern screens to interface with so much more than a couple of channels. “Some people fight me on it, but I prove them wrong. You spend so much time in the kitchen, and you can run music through it, whatever you want.”

At the other end of the spectrum, minor do-it-yourself touches, Alan recommends updating outlets and switch-plates, which usually come in institutional off-white. With little more than a stop to the hardware store and a screwdriver, those bland patches can be customized to add a little flavor to your kitchen. When stainless-steel appliances are on hand, Alan suggests brushed stainless-steel plates with gray outlets, for example.

From quartz countertops to ditching cabinet doors, there are innumerable ways to craft a recipe for the perfect kitchen. Just keep in mind that taste is subjective and always changing.