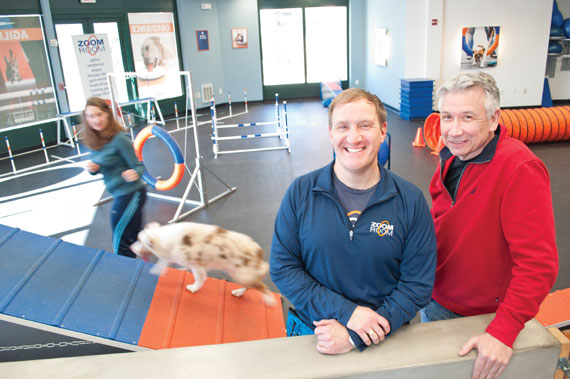 On a recent Friday afternoon nearly a dozen dogs, guided by their owners, were put through the paces of an indoor obstacle course in a sunny, storefront space in Rockville. From a split-level runway to a play tunnel to a bar jump and a hoop, this weekly agility class at Zoom Room helps increase the confidence and the bond between each owner and her dog.

The trick? Essentially, exhaustion — mental, as much or more than physical.

“All those dogs will go home and sleep, and their owners will have a nice, quiet afternoon,” Zoom Room’s Steve Mulder says immediately after leading the class. Mulder, who runs the store with his partner, Jean-Louis Marechal, recalls feedback from one customer who works out of her home that she shares with two “very high-energy” border collies: “She told me, ‘Steve, every time I come to your noon class, I know I have a quiet afternoon and can get work done.’”

A growing national franchise headquartered in Los Angeles, Zoom Room, generally speaking, is about boosting and easing the experience of canine companionship — from selling quality, eco-friendly treats and toys, to hosting events for breed-specific Meetup groups and rescue organizations. Customers can also rent the space for a pooch’s birthday party, even a “Doggy Disco,” complete with a disco ball and laser lights that provide some lucky pooches with hours of fun. 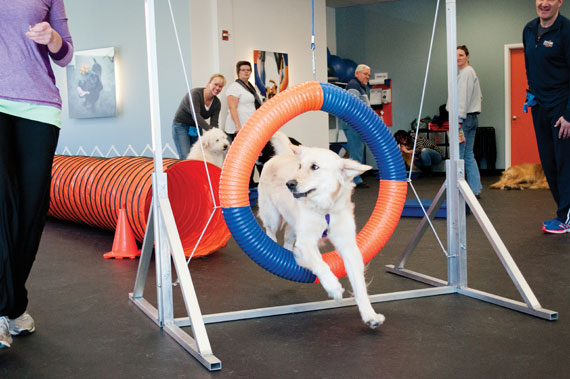 But the chief focus is in dog training. The approach and variety go beyond the traditional, according to Mulder, who opened the Rockville location a little more than a year ago. “Most dog training takes place with just one individual working with the dog,” Mulder explains, whether at the dog’s home or during a week or two of boot camp away from both home and owner. At Zoom Room, by contrast, “There’s no training that’s done, whether privately or in a group class, without the owners present,” he says, adding, “We don’t train dogs. We train people to train their dogs.” As such, each owner-and-dog team can learn and adapt at its own pace.

Zoom Room offers a wide range of classes, at different levels, that work for dogs of any and all sizes and breeds. “That’s the real joy of this: Every dog can do this, and every dog owner can do it,” Mulder promises.

The obedience series begins with “Basic Manners,” which goes beyond the commands “sit,” down” and “stay” to include “Leave It,” which Mulder explains is “for all the people who struggle walking their dog with chicken bones all over the place.” That includes Mulder and Marechal and the couple’s canine companion, Abby. 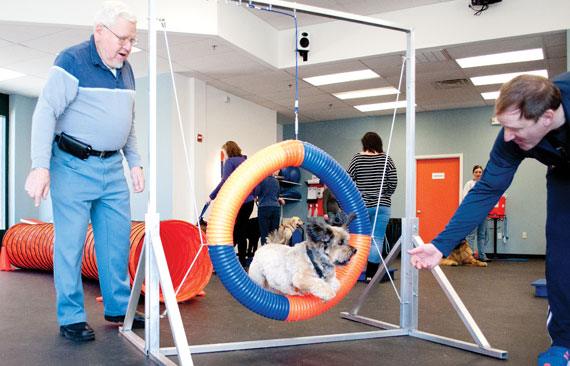 In fact, Abby, an Australian shepherd mix rescued nearly three years ago, sparked the couple’s decision to open the area’s first Zoom Room. “I really fell in love working with her,” says Mulder, who in Zoom Room saw both a business opportunity and a dramatic career change after more than 20 years as a federal government lobbyist. “I was very burned out. I had very little personal satisfaction in it anymore.”

“This is really quite different,” Mulder says, about his work as a small business owner with his partner, but especially as a certified dog trainer, helping advance the canine cause. Says Mulder: “Every day I see somebody making progress, and that’s really quite satisfying.