An Arkansas judge found his state’s same-sex marriage ban to be unconstitutional in a ruling handed down Friday.

Circuit Court Judge Christopher Piazza declared a 1997 state law and a constitutional amendment approved by voters in 2004 defining marriage as between a man and a woman in violation of the U.S. Constitution. Piazza’s decision makes him one of several state and federal judges to find state bans on same-sex marriage unconstitutional since the U.S. Supreme Court issued a sweeping decision last June striking down Section 3 of the federal Defense of Marriage Act (DOMA).

“A marriage license is a civil document and is not, nor can it be, based upon any particular faith. Same-sex couples are a morally disliked minority and the constitutional amendment to ban same-sex marriages is driven by animus rather than a rational basis. This violates the United States Constitution,” Piazza wrote.

Much as occurred in Utah and Michigan, Piazza issued no stay on his decision. As such, same-sex marriages could begin in Arkansas if the decision is not put on hold. However, Arkansas officials have requested an immediate stay of Piazza’s decision. Arkansas Attorney General Dustin McDaniel, a Democrat, has said he will appeal the decision, despite his support for same-sex marriage.

“We respect the Court’s decision, but, in keeping with the Attorney General’s obligation to defend the state constitution, we will appeal. We will request that Judge Piazza issue a stay of his ruling so as not to create confusion or uncertainty about the law while the Supreme Court considers the matter,” a spokesperson for McDaniel told the Arkansas Times.

In his Friday decision, Piazza stated he was not unmindful of the criticism that judges should not act as “super legislators.” “However, the issue at hand is the fundamental right to marry being denied to an unpopular minority. Our judiciary has failed such groups in the past,” Piazza wrote.   Unlike many of the federal judges who have struck down same-sex marriage bans in previous months, Piazza is not serving a lifetime appointment and is up for reelection this month. He has served as the Division 2 judge of the Sixth Circuit in Arkansas since 1990.

Noting the 1967 U.S. Supreme Court case that declared bans on interracial marriage unconstitutional, Loving v. Virginia, Piazza wrote, “It has been over forty years since Mildred Loving was given the right to marry the person of her choice. The hatred and fears have long since vanished and she and her husband lived full lives together; so it will be for the same-sex couples. It is time to let that beacon of freedom shine brighter on all our brothers and sisters. We will be stronger for it.”

According to Evan Wolfson, founder and president of Freedom to Marry, the decision in Arkansas is “the latest in a unanimous wave of favorable rulings from more than a dozen state and federal judges across the country in recent months.”

“Judge Piazza held that there is no good reason for discriminating against couples and their loved ones just because they are gay,” Wolfson said in a statement. “With nearly 70 marriage cases now making their way through the courts, and five federal appellate courts now hearing arguments and soon to rule, today’s decision out of Arkansas underscores that all of America is ready for the freedom to marry.” 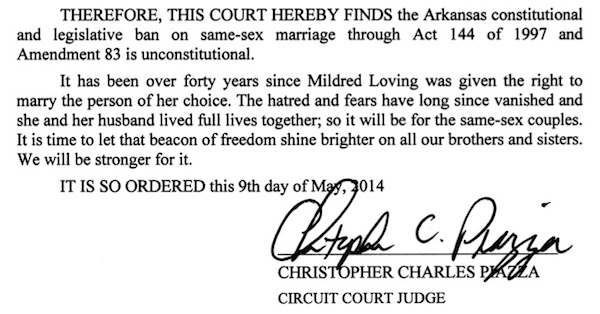