LG rolls out the G3

Power users, gamers and those who like to have their foot on the gas at all times should appreciate what’s under the G3’s hood. Inside you’ll find Qualcomm’s latest silicon, the Snapdragon 801. What that means in layman’s terms is a 2.5GHz processor with four cores, which, paired with 2GB of RAM, should be more than enough grunt to handle everything its Android 4.4.2 KitKat OS can throw at it. The G3 shouldn’t have any stamina issues, either, with a hefty 3,000mAh battery in place to keep you going long after other smartphones have died. Incidentally, to any iPhone users reading this, you have just 1,570mAh of juice to keep your 5S going. If you wonder why you’re constantly reaching for a charger, there’s your answer. The G3 is almost lacking in this department, as Sony’s Xperia Z2 packs 3,200mAh and Nokia’s Lumia 1520 a generous 3,400mAh. Combined with LTE, WiFi across the usual a/b/g/n/ac standards, BlueTooth 4.0, NFC and GPS, the G3 has everything a user could want in a current smartphone.

What’s more, it’s not as if LG has given themselves a generous amount of room to pack all of the G3’s features into. The screen-to-bezel ratio of the G3 is 74 percent — a fact sure to land you a date if you quote it at a bar. In the hand, that translates to a device that defies its large screen. A mere .35 inches thick and under 3-inches across, the G3 could convince those who have refrained from upgrading to a larger device to take the plunge. It’s also light, at just over 5 ounces. Sadly, those slender measurements are a result of one sacrifice — though heavily rumored, the G3 lacks a metal case. Instead, it’s good old polycarbonate, albeit coated in scratch-resistant, polished metallic hues: black, silk white, burgundy red shine gold and moon violet, to be specific. It’s attractive, and looks suitably premium — especially compared with Samsung’s perforated faux-leather plastic design — but I can’t be the only person who wishes LG had added a little extra bulk and upgraded to aluminum or something similar.

A handy trade-off of that decision, though, is wireless charging built into the case. If you have a charger that supports the Qi standard, simply drop the G3 onto it and it’ll start sucking up juice. It’s a nice feature, though AT&T will strip it out if the G3 comes to their airwaves, as they’ve jumped in bed with Powermat, a different wireless charging standard, which currently requires a bulky case for compatible devices. As well as wireless charging, the rear is still home to LG’s unique rear-facing power and volume buttons, nestled below the camera. They’ve been streamlined this time around, which should make them easier to use and less likely to rub on things when the G3 is placed on surfaces.

One of the big additions to the G3 is also the coolest sounding: lasers. Calm your expectations, though: you won’t be shooting jets of light from the back of your Korean smartphone. Instead, it’s an industry first laser-powered auto focus, which utilizes a laser beam to measure the distance between camera and subject. That’s still pretty cool, right? Right? In practice, it should mean virtually zero time between pressing the shutter button and waiting for the G3 to focus and take the shot — even in low light or with fast-moving subjects. The actual camera module carries over from the G2, though that’s hardly a bad thing. The optically-stabilized 13 MP shooter is one of the better smartphone cameras on the market. 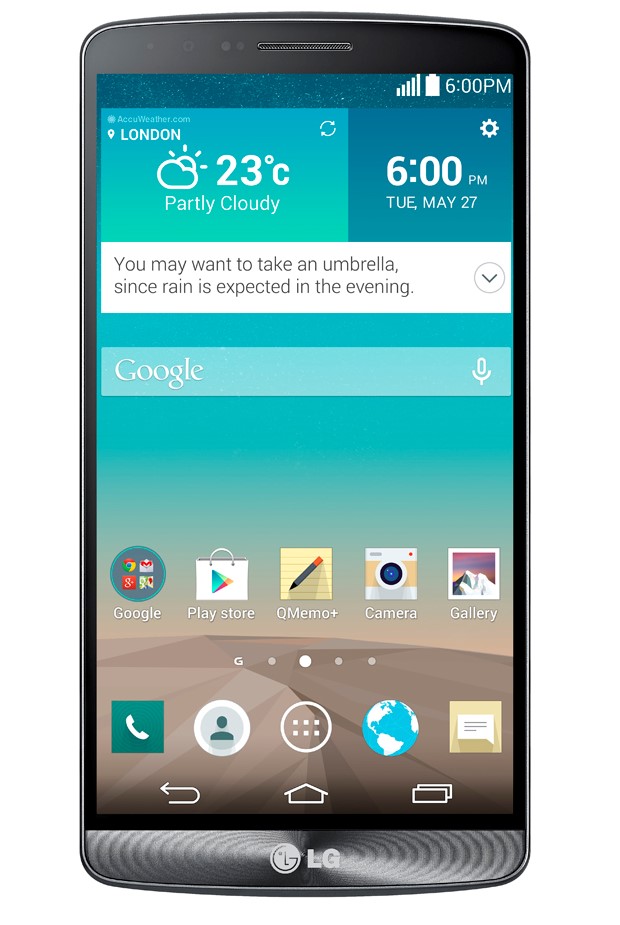 In terms of software, don’t expect the G3 to come with stock Android. It’ll once again have LG’s own UX baked in on top of Android KitKat, but at least this time around LG is trying to make it less obtrusive and cartoonish. The user interface is flatter, more minimalist, echoing the changes to iOS 7, which in turn borrowed liberally from Windows Phone and stock Android. Smart features such as a keyboard that tries to understand your typing habits to minimize mistakes, a smart notice function that can offer suggestions and recommendations based on your usage patterns and locations (kind of like Google Now) and Smart Security, allowing users to remotely wipe and kill their G3 should it be lost or stolen.

All-in-all, the G3 offers a worthy upgrade over the G2. It’s more premium build, though still not metal, is definitely an improvement over the G2’s plasticky exterior, its screen is one of the best available currently and its innards should ensure it remains current for the duration of a smartphone contract. Whether it all blends together into a near-perfect device is still up in the air, however, and LG isn’t willing to say when the G3 will actually reach American shores. It launches tomorrow in South Korea, and will roll out to over 170 carriers worldwide over the coming months. If you’re intrigued — and I wouldn’t blame you if you are — expect it to land at all major carriers, just like its predecessor, with a suitably premium price tag in tow.