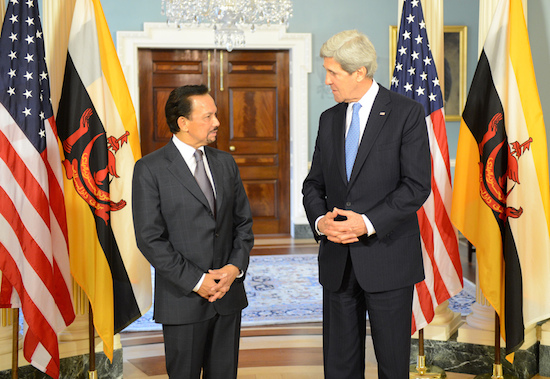 With the expected implementation of an anti-LGBT law in Brunei that would punish homosexuality with death by stoning, LGBT-rights advocates are mobilizing against the financial interests of the Southeast Asian country.

In a letter dated May 2 sent to leadership officials of several organizations that plan to host events at American hotels owned by the Sultan of Brunei, Hassanal Bolkiah, Human Rights Campaign President Chad Griffin urged such events to be relocated elsewhere.

“I have attended various events at both hotels over the past several years. But given the extreme nature of these developments, I feel strongly that we in the LGBT community and our allies should take our business elsewhere,” Griffin wrote, encouraging such events be hosted at Los Angeles-area hotels other than the Brunei-owned Beverly Hills Hotel and the Hotel Bel-Air.

Griffin’s letter comes after Gill Action’s Political Outgiving 5.0 conference, scheduled to run May 1 through May 5, was relocated from the Beverly Hills Hotel. The Beverly Hills Hotel was bought by the Sultan of Brunei in 1987 and is managed by the Dorchester Collection, organized by the Brunei Investment Agency.

While homosexuality previously carried a penalty of 10 years in prison in Brunei, Bolkiah’s government is in the midst of phasing in one of three stages of Sharia law in Brunei. Stage three, which will include the death penalty for same-sex relations, is expected to be implemented in 2015.

Speaking to reporters today, State Department spokesperson Marie Harf said they have “very serious concerns” over certain provisions of Brunei’s new Islamic code and are monitoring how it will be implemented.

A number of celebrities have also joined the boycott of American hotels owned by Brunei, including Ellen DeGeneres and Stephen Frye.

“LGBT citizens in many countries around the world remain persistent targets of harassment, arrest, violence, and torture for simply being who they are,” said Ty Cobb, director of global engagement for HRC, in a statement.  “The decision by the government of Brunei to soon become the 8th nation to allow the death penalty against LGBT people is horrific and sickening.”

Earlier today, protesters demonstrated outside the Beverly Hills Hotel over the historic hotel’s connections to Brunei. “We’re taking a stand against the barbaric and inhumane policies of the Sultan of Brunei, who owns the Beverly Hills Hotel and the Hotel Bel Air,” L.A. Gay & Lesbian Center CEO Lorri L. Jean said, according to a statement. “His policies of murdering and torturing gay and lesbian people and women have no place in a civilized society.”

Bolkiah is one of the richest men in the world, worth around $20 billion due to his country’s oil reserves, according to Forbes. He has ruled Brunei since 1967.