Joey Arias returns to L'Enfant Cafe, where "anything could happen" 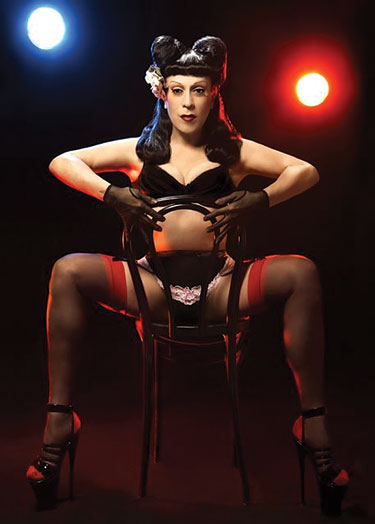 “It’s just like old-school cabaret,” Joey Arias says of The SpeakEasy at L’Enfant Cafe. “The way it probably was in ’40s and ’50s. It’s fun. There’s a great DJ. It’s very intimate.”

The New York-based Arias, who has been performing at the D.C. venue for a couple years now, stops by this Sunday, May 11, for his first shows at L’Enfant in a year. His fellow New York singing drag queen Flotilla DeBarge will join in on the fun.

L’Enfant’s owners Jim Ball and Christopher Lynch became fans of Arias when they lived in New York in the ’90s and caught his popular and critically acclaimed cabaret at Bar d’O. To some extent, L’Enfant reminds Arias of that small nightclub in New York’s West Village.

“I like people sitting right up in front of me,” he says. “You’ve got to really have your chops together, and be really secure with yourself when you do something like that. It’s a lot of improv.”

Arias is currently in the final developmental stages of Z Chromosome, a follow-up of sorts to Arias With A Twist, his wild stage show with puppeteer Basil Twist that Woolly Mammoth produced two years ago. Arias credits Manfred T. Mugler, also known as fashion designer Theirry Mugler, as the writer and director of Z Chromosome. Arias is also preparing for an international touring show sponsored by MAC Cosmetics.

But he’s always happy to return to performing cabaret in intimate venues such as L’Enfant, where prices are reasonable, there’s no playback — “this is all live singing” — and audience members are close enough to make fun of, or at least have fun with. Teases Arias, “Anything could happen.”