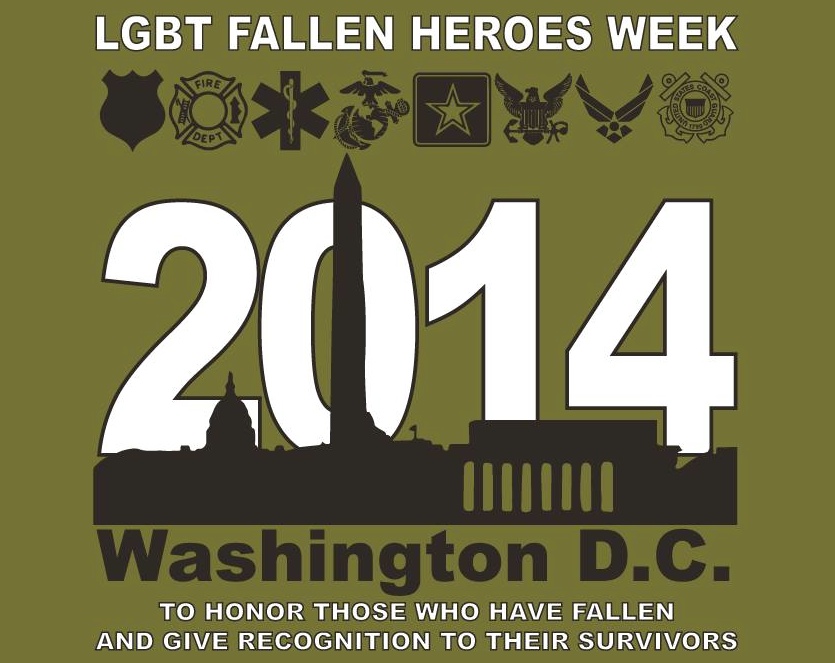 In times of mourning, survivors usually gather together, with particular attention given to a deceased’s spouse. In the world of LGBT “fallen heroes” – those members of the military, police and other emergency services who have died – a lack of universal marriage equality or simple discrimination sometimes stand in the way.

“We realized that all across the country there are these heroes and their significant others who aren’t getting the recognition their heterosexual counterparts are getting,” says Charger Stone, the D.C. promoter who, with his husband Scott Gunn, co-founded LGBT Fallen Heroes Memorial Service, which now includes a fund and a week of events. “The person we honored last year was denied access to her partner’s memorial service by her partner’s family. They’d been together 23 years.”

That fallen hero was police Master Cpl. Sandra Elizabeth “Sandy” Rogers of Aiken, S.C., shot and killed in the line of duty. Her surviving partner, Frances Williams, was at least able to find some comfort at the LGBT Fallen Heroes Memorial Service held this time last year in Dupont Circle.

“It was really powerful,” remembers Stone, adding that members of Rogers’s police department, in Washington for National Police Week, also attended. “You didn’t have to hear her words. You could just see it on her face. She was so thankful to be given the opportunity.”

Next week, Stone, Gunn and dozens of other volunteers will once again offer this special memorial service, honoring six who died in 2012 or 2013: Gene M. Kirchner, a Maryland firefighter who died combating a residential blaze; Army Staff Sgt. Donna R. Johnson of North Carolina, killed in Afghanistan; Army Staff Sgt. Darren Manzella of New York, a high-profile activist in the fight to remove “Don’t Ask, Don’t Tell,” killed in a car accident; Phillip Curtis McKee III, an Arlington County firefighter who died last year of injuries sustained while responding to the 9/11 attack on the Pentagon; Patricia A. Parete of Buffalo, N.Y., who died from complications due to a gunshot wound suffered in the line of duty that had left her paralyzed from the neck down since late 2006; and Crystal Adele Parker of Georgia, shot to death in a case in which her roommate, possibly a past girlfriend, is the primary suspect. 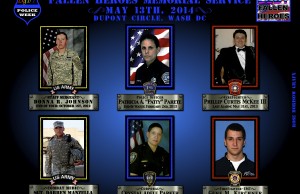 Stone, a former Marine, says that marrying Gunn, a Maryland police officer, has given him a particular empathy for the surviving spouses of those killed in the line of duty.

“As a Marine, I never thought about what it was like to be on the other side if someone dies,” says Stone. “When Scott goes out in the middle of the night to do surveillance, there’s a possibility he won’t come home. Spouses really have to be supportive to make things work.”

In the case of Gunn and Stone, teamwork may be even more powerful than support, as the two have expanded this effort to numerous events, taking place May 12 to 17, and the fund, managed by The DC Center, that’s raised roughly $6,000, due in large part to substantial donations from the Centaur MC, Scruff, Aquafest Cruises and Barefoot Wines. Stone says he hopes the fund will soon reach the point where it can be used to help surviving spouses come to Washington for the LGBT Fallen Heroes Week.

“We just want to give people the honor they deserve and recognize their survivors,” says Stone. “So many get pushed to the side. They don’t always get that flag.”

For the full schedule of LGBT Fallen Heroes Week, or to learn more about volunteering or donating, visit lgbtfallenheroesfund.org. The LGBT Fallen Heroes Memorial Service, with Army Reserve Brig. Gen. Tammy Smith, is Tuesday, May 13, from 3 to 5 p.m., in Dupont Circle.

Follow Will O'Bryan on Twitter @wobryan.
← Previous Story Simpson To Run for State Board of Ed
Next Story → Bostic Ruling Could Boost Other States’ Marriage Fights