Simpson To Run for State Board of Ed

Gay man, former youth advocate for SMYAL, to run for Ward 1 board seat

Scott Simpson, a gay man, has announced his candidacy for the open Ward 1 seat on the D.C. State Board of Education that is being vacated by incumbent Patrick Mara.

Simpson, the press secretary and a self-described “education advocate” at The Leadership Conference on Civil and Human Rights, a national civil rights organization, and a former youth advocate and mentor for the LGBT youth organization SMYAL, officially filed with the D.C. Office of Campaign Finance late last month. Mara, the incumbent, announced in March via Twitter that he would not run for re-election. 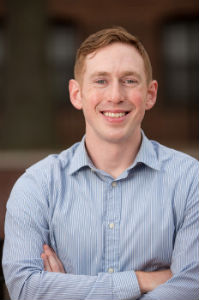 “Ward One families deserve a strong advocate on the State Board of Education who’s rooted in the community and understands how education policy choices impact students in the classroom,” Simpson said in a release announcing his candidacy. “Throughout my career and for over a decade in D.C., I’ve been committed to expanding educational opportunities for all students. I’m ready to put those skills to work on behalf of Ward One families on the State Board of Education.”

The board elections are nonpartisan, held at the same time as the general election for mayor and various D.C. Council seats and federal offices. Nominating petitions are expected to be released by the D.C. Board of Elections on June 13, after which candidates must gather 200 signatures of duly registered voters who reside in the ward where the candidate is running, according to the Board of Elections.

Simpson’s campaign is chaired by Beverley Wheeler, a former candidate for the Democratic nomination for the Ward 1 Council seat and former executive director of the State Board of Education.

“I am the chair of this campaign because we must move forward together and bridge the diverse communities of Ward One: Scott Simpson can be that convener,” Wheeler said in a statement. “Scott is exactly the advocate our city needs on the State Board of Education. He has energy, vision, and substance. He genuinely cares about improving neighborhood schools and understands the role of the SBOE.”

If elected, Simpson would become the second openly gay member of the State Board of Education, following Jack Jacobson, the Ward 2 board member who was elected in 2012.