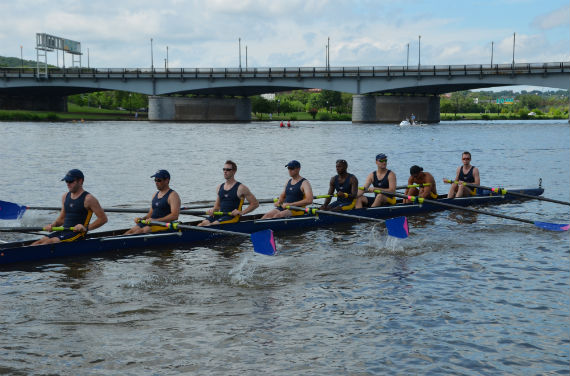 Members of the DC Strokes Competitive Team warm up for a race. The rowing club s the sponsor of the annual Stonewall Regatta. Photo credit: Paul Heaton

The DC Strokes Rowing Club, the oldest LGBT rowing club in the world, has put out a call for volunteers for its 21st Stonewall Regatta, the only LGBT regatta in the United States officially sanctioned by US Rowing, the sport’s official body, on June 1.

Volunteers do not need to have rowing experience or knowledge of the sport in order to participate. They will be expected to set up and take down the course, coordinate vehicle parking, assist with race starts, calculate and post race results, and help at the marketplace, among other duties. Morning and afternoon shifts are available.

The regatta will feature 30 teams, 400 rowers and more than 200 boats competing in races throughout the day on the Anacostia River, and will take place at the Anacostia Community Boathouse, at 1900 M St. SE. Volunteers will be provided with breakfast, lunch, and beverages, and are invited to a post-race party at Nellie’s Sports Bar.

Paul Heaton, of the DC Strokes Rowing Club, said that while the regatta coincides with Pride month and is sponsored by an LGBT rowing club, its reach has expanded beyond the local gay community. For instance, this year’s regatta will feature an international entry, with rowers from Paris, Copenhagen, and Berlin coming to participate, as well as other entries from throughout the United States.

“Although DC Strokes will put up a few teams, there are probably more straight teams than gay,” he told Metro Weekly.

The competition is named after the Stonewall Inn in New York’s Greenwich Village, where a series of demonstrations following a police raid in 1969 is considered to be the start of the modern day gay rights movement. The first regatta was held in 1994 at the Orchard Beach Race Course in Pelham Bay State Park, as part of Gay Games IV in New York City. Following the event’s success, it was moved permanently to Washington. The director of the first regatta, Elisabeth (Morgan) Fondriest, is returning to serve as this year’s director.

The regatta will run from 8 a.m. to 4 p.m., starting just north of the 11th Street Bridge and finishing at the boathouse. There is no admission, and parking and shuttles for spectators will be provided from Maritime Plaza, at 1201 M St. SE.

John Riley is the local news reporter for Metro Weekly. He can be reached at jriley@metroweekly.com
← Previous Story Casa Ruby Marks Second Anniversary
Next Story → “Gay Power to Gay People” Comes to Pride