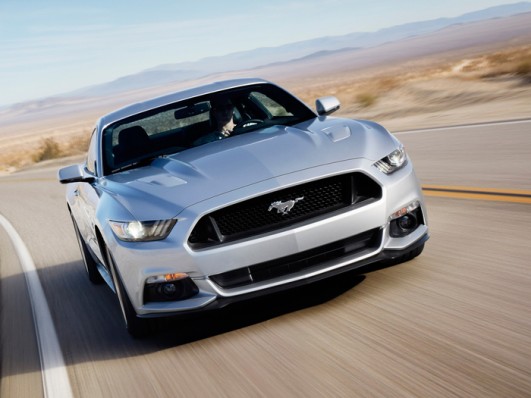 The automotive world has seen its share of highs and lows recently. For Tesla, it finally gained some recognition at the federal level for its direct-to-consumer sales model that has drawn so much ire — and legislation — from certain states. Ford, meanwhile, after months of teasing and auto show appearances, has finally opened up the order books for the all-new 2015 Mustang. General Motors, however, has had a less spectacular time recently. The aftermath of its recall debacle has left it with a hefty fine and an even bigger dent in its public image.

Tesla is trying something different in the automotive market. The California-based company manufactures an entirely-electric sports sedan, maintains a nationwide, free-to-use charging network and is investing heavily in bringing an affordable, desirable electric car to the mass market in the next few years. It’s also pushing a sales model that flies in the face of current convention. For decades, American consumers have purchased their cars from dealerships, managed at state or regional levels, serving as a middleman between car company and customer to broker deals and push sales. Dealerships are big business, both economically and politically, and any threat to status quo is apparently worthy of severe retribution. Tesla eschews using dealerships and instead operates its own stores. Customers can customize and purchase a car directly from its website or from its stores — often found in malls, such as Tysons Corner in Virginia — and have it delivered to their home. Tesla effectively cuts out the dealership middleman.

Naturally, this caused more than a little drama amongst some dealers, so much so that in Missouri and New Jersey, lobbying by dealerships and the National Automobile Dealers Association (NADA) — and, likely, more than a few backroom meetings — led to legislation being introduced to prohibit or limit Tesla or any other manufacturers from selling its cars directly to customers. Tesla, finding no sympathy at state level, took its fight to the federal government and, it would seem, has found an ally in the Federal Trade Commission. In April, the FTC issued a blog post from three officials that stated any legislation prohibiting direct sales was “protectionist” and “bad policy.” Now, the FTC has issued a statement in which it gave its most vocal support for allowing direct sales to consumers. It called laws prohibiting direct sales to be an example of “protection that is likely harming both competition and consumers,” adding that “consumers are the ones best situated to choose for themselves both the cars they want to buy and how they want to buy them.”

NADA’s VP of public affairs told AutoblogGreen, “It’s a major fallacy to compare buying cars with buying other goods, like books or computers. New cars are major purchases that require licensing, insurance, complex financing involving trade-ins, contain hazardous materials, and if operated incorrectly can cause serious bodily injury.” The FTC rejected this notion in its April blog post, believing that consumers now do most of their research online before buying a car. In its most recent statement, it added that Missouri’s proposed further restrictions on direct sales would “amplify the adverse effects of the current prohibition” and “discourage innovation,” while New Jersey’s legislation “is very likely anticompetitive and harmful to consumers.” For Tesla, the battle is far from over, but with the FTC’s blessing it now has a much more powerful hand to play in states considering legislation or where it has already been implemented, such as in Texas, Arizona and Virginia. Yes, even in Virginia. Head to Tysons Corner’s Tesla store and you can’t directly buy a Tesla. You can browse model options, color choices, leather, interior paneling and accessories, but Tesla’s staff can’t advise you on prices or other such information. Hopefully, the FTC’s backing of direct sales will put an end to Tesla’s woes.

Speaking of sales, Ford should expect a rather sizeable amount of cash to enter its bank account over the next few weeks. When the 2005 Mustang launched, it drove a sales increase at Ford after a six year dry spell for the company, with sales increasing even further in its second year. The outgoing Mustang has sold almost 1 million cars since its debut a decade ago. Consumers now have another reason to break out the checkbook and head to their local Blue Oval dealer. The all-new, 2015 Mustang, teased and paraded for almost half a year, is finally available to order in coupe form. For $24,425, including destination and delivery, you can climb into the base model, fitted with a 300 horsepower, 3.7-liter V6 mated to either a six-speed auto or, interestingly, a six-speed manual transmission. Pricing for the 305 horsepower, 2.3-liter EcoBoost engine and the 5.0-liter, 420 horsepower V8 powerplant hasn’t been announced, but with the base model carrying a $1,000 premium over the outgoing 2014 model, potential customers shouldn’t face sticker shock.

The 2015 Mustang will be available nationwide this fall, wit h the first models scheduled to reach customers “later this year.” If you want to be first in line for delivery, we advise you waste no time in heading to your nearest Ford dealership.

Heading to another of Detroit’s “Big Three” automakers, things are a little less rosy over at General Motors. GM this week agreed to pay a $35 million fine to the National Highway Traffic Safety Administration (NHTSA) due to its mishandling and delayed reporting of its fatal ignition switch problem that has plagued millions of GM’s vehicles. The NHTSA will place GM under “unprecedented oversight” in an attempt to halt any future issues with recalls, with GM forced to provide the regulator with unrestricted access to their internal processes during ongoing recalls. GM must also complete any outstanding repairs to existing affected cars by October 4, or risk facing further fines. Secretary of Transportation Anthony Foxx stated that “Safety is our top priority, and today’s announcement puts all manufacturers on notice that they will be held accountable if they fail to quickly report and address safety-related defects.”

“We have learned a great deal from this recall. We will now focus on the goal of becoming an industry leader in safety,” GM’s embattled CEO Mary Barra said in an official statement. “We will emerge from this situation a stronger company.” Barra has faced criticism from all sides, including an appearance before Congress, over General Motor’s mishandling and cover-ups surrounding the recall debacle. Customers affected by the ignition switch problem faced the risk of their car’s engine switching off while driving, limiting control of the vehicle and disabling deployment of the airbags. So far this year, GM has recalled a staggering 11.1 million vehicles in the U.S. alone — more vehicles than company sold worldwide last year. For GM, the negative publicity has yet to impact sales, which were up 7 percent in April over 2013, but it will likely be hoping for a swift PR recovery once all affected vehicles are recalled and repaired. For Mary Barra, who assumed the role of CEO in January of this year, 2014 could well be the most painful in her 34 years of service at General Motors.

Rhuaridh Marr is Metro Weekly's managing editor. He can be reached at rmarr@metroweekly.com.
← Previous Story State of the Union
Next Story → Swedish Tease: the new Volvo XC90