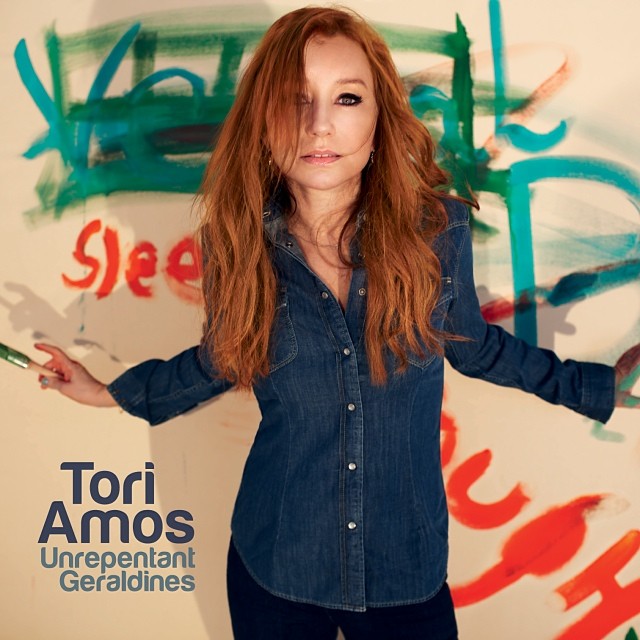 It struck me while listening to Unrepentant Geraldines, Tori Amos’ first non-orchestral studio album in five years, that children born when her solo debut Little Earthquakes emerged are now grown adults who’ve likely experienced many of the same feelings and doubts that Amos expressed so vividly on that album. The Tori Amos of 22 years ago whose emotions hovered between tremulous vulnerability and an awakening to empowerment is still in there somewhere, but she’s wiser and in control. The Tori Amos of 1996’s Boys for Pele, a sonic grenade launched in the wake of a bitter breakup, has now been married for 16 years. The Tori Amos of 1998’s devastating From the Choirgirl Hotel, who wrote about her traumatic miscarriage with such piercing agony, is now singing duets with her 13-year old daughter Natashya (she guests on “Promise,” her voice intertwining with her mother’s with a touching grace and beauty). The Tori Amos of Unrepentant Geraldines is 50, a veteran of battles in her personal life and her career, who chronicles her striking and poetic observations of the world with a steely-eyed clarity.

Amos said in a recent interview that she listens to her fans, and that their stories and hopes often find their way into her music. The ones — and there are many — who have been clamoring for a return to the “girl with a piano” style since Tori plugged-in Dylan-style (oh the treachery!!!) for the trippy and cathartic From the Choirlgirl Hotel must be ecstatic to have finally gotten their wish. The piano is front and center on Unrepentant Geraldines, more so than on any album since Boys for Pele. The crisply-produced arrangements are sparse, with plenty of space for Tori’s piano and crystalline melodies to stand front and center. She’s been recording with mostly full band arrangements starting with From the Choirgirl Hotel through 2009’s underrated Abnormally Attracted to Sin, so it’s a nice change of pace. In many ways Unrepentant Geraldines is full-circle to her early days, but through a very different, much more experienced lens.

For Unrepentant Geraldines, Amos found herself inspired by visual arts. She mentions Paul Cezanne in one of the album’s key tracks, “16 Shades of Blue,” in which she reflects on the often cruel societal norms regarding age. From the narrative perspective of a 50 year old woman whose relationship is ending, she expresses incredulity when told “you’ll get over it in time.” She touches on her place in the music industry as she proclaims, “There are those who say I am now too old to play,” in a passage reminiscent of her brilliant “Curtain Call” from Abnormally Attracted to Sin. “See over there at 33, she fears she’ll lose her job because they hear the ticking of the clock. At only 15, I said 15, they say her future’s bleak, she should have started this at 3,” she sings, lamenting the painful fact that arbitrary preconceptions about age often translate into painful reality. It’s a brilliant piece of work, one of many on Unrepentant Geraldines.

The first single, “Trouble’s Lament,” is a gem. “Trouble needs a home, girls,” she warns ominously, obviously speaking from experience when she cautions that “trouble” can be seductive and difficult to repel. “And Satan knows how danger makes you feel…” “Wild Way” is a beautifully melodic piano ballad with a gorgeous vocal. The sad and wistful “Wedding Day” tells of a woman in a marriage that has faded into sullen walls of silence yearning for the warmth of long ago when the couple’s love and fasciation for each other was still new and fresh. The mystical “Selkie” is a beautiful piece that would feel right at home on Under the Pink. The centerpiece of the album is the title-song, in which Amos explores a theme familiar in her music:  rebellion against the guilt, shame and the need to “repent” which can trap someone in a box created by others who claim moral superiority simply because they choose to believe in certain ancient mythologies. She makes it perfectly clear she’s making a declaration of unrepentant independence: “I’m gonna free myself from your opinion. I’m gonna heal myself from your religion. I’m gonna free myself from your aggression. I’m gonna heal myself from your religion.” No apologies.

The album’s stunningly beautiful finale, “Invisible Boy,” is just Tori at the piano, in that soft, empathetic voice that she sometimes deploys, assuring someone – and us – that the future is full of possibility, clay for each of us to shape how we choose. It will make you fall in love with Tori all over again.

Unrepentant Geraldines is Tori’s 13th studio album, and her finest since 2003’s epic Scarlet’s Walk (check out our rundown of her stellar back catalog). It proves once again that she’s a survivor. Tori Amos has navigated the music industry’s notoriously ruthless machinations by refusing to budge an inch. She records in her own studio, works with a team of collaborators, including her husband, that have been with her for years, and she follows whatever direction her inspiration takes her – whether that might be theater, like The Light Princess which opened last year at the Royal National Theatre London, orchestral work like her haunting song-cycle Night of Hunters released in 2011, or her own distinct brand of piano-driven pop/rock. She’s never chased after hit singles — despite the fact that she’s been a prominent artist for over 20 years and has five platinum and nine Top 20 albums to her credit, she’s never hit the Top 40 singles chart in the U.S. – not once. But that hardly matters. She maintains a sizable fan-base who has been with her the entire journey and have all changed in their own ways like she has; and of course she also has new fans as well. Unrepentant Geraldines is a triumphant album not only because it’s such a compelling piece of work, but because it’s another signpost for an artist who’s traversed a singular musical journey for over two decades while so many others have long since fallen off the train, lost in the dust somewhere far behind.

Unrepentant Geraldines will be released on May 13, but it can be heard streaming in its entirety on Amazon.com up through the 12th. Tori Amos has just launched a solo tour in support of the album, and will be performing at DAR Constitution Hall in D.C. on August 16. Don’t miss it, and don’t pass on Unrepentant Geraldines. It’s an album of beauty and depth, a worthy addition to Tori Amos’ already remarkable legacy.

Music writer for Metro Weekly. Contact at cgerard@metroweekly.com.
← Previous Story Prince: Ranking His Albums, Bottom to Top
Next Story → Michael Jackson’s “Xscape” a worthy tribute to the King of Pop