”Witness for Love” Arrives in Arlington

A group of about 30 people, including faith leaders of various denominations, gathered outside the Arlington County Courthouse on Friday afternoon, April 25, to protest Virginia’s same-sex-marriage ban and to urge legislators to take the steps needed to put that ban on the ballot in hopes of repealing it.

Every year since Virginia voters approved the constitutional ban, the Marshall-Newman Amendment, in 2006, a group of dedicated individuals has trekked to local courthouses throughout the state to demonstrate their support for marriage equality. 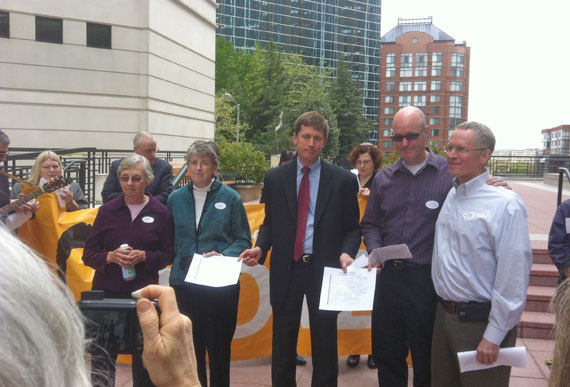 Many of Friday’s participants are affiliated with the group People of Faith for Equality in Virginia (POFEV), which has taken the lead in organizing such demonstrations, dubbed “Witnesses for Love.” Participants also came from Parents, Families & Friends of Lesbians and Gays (PFLAG), the statewide LGBT-rights organization Equality Virginia, Virginia Pride, and the Alliance for Progressive Values, among others.

This year’s demonstrations were scheduled to occur in up to 23 locations throughout the commonwealth on Valentine’s Day, but many were canceled due to weather. Friday’s rally in Arlington was one such “Witness for Love,” where interfaith religious leaders and local residents come together to sing, offer prayers, make speeches about equality and stand in solidarity. This year, as in previous years, same-sex couples have attended the demonstrations and applied for marriage licenses as a symbolic gesture, knowing the applications will be denied by the county clerk.

Since the first of the 2014 demonstrations, starting on Valentine’s Day, the Rev. Robin Gorsline, president of POFEV, has consistently said the aim of the rallies is to change hearts and minds and create an impetus for legislative action by highlighting the stories of same-sex couples disadvantaged by Virginia’s ban. Notably, in February a federal judge declared the ban unconstitutional. The U.S. Circuit Court of Appeals for the Fourth Circuit is due to hear arguments in that case in May.

Arlington County Clerk Paul Ferguson, a Witness for Love participant for the past three years, praised the Arlington demonstrators for their dedication and resilience, as many have returned year after year, vowing to do so until the ban is lifted. Even though Ferguson was forced to reject the same-sex marriage-license applications Friday, he has repeatedly told same-sex couples he will keep their applications in a file that can be reopened once he can legally process them. At Friday’s rally, Ferguson posed for pictures with two couples who applied for licenses — Michael Bagwell and Clark Chesser of Fairfax, and Kathleen Light and Ann Rahn of Arlington — and their rejected applications.

“I just want to commend everybody who’s worked so hard on this issue,” Ferguson told the crowd. “There’s every reason to be angry about the discrimination you face, but you have put your energy into changing what is a discriminatory policy.”

State Del. Patrick Hope (D-Arlington Co.), a candidate for Congress who represents the area around the county courthouse and who attended the rally, told Metro Weekly that he knows legislators whose opinions around marriage equality are changing, but added that it remains an uphill fight to pass the necessary measures that would return the Marshall-Newman Amendment to the ballot.

Under Virginia law, the earliest the amendment could be repealed would be 2016, and only if the General Assembly, in both 2015 and 2016, were to approve the change, which would then still have to appear as a referendum on the ballot during the 2016 presidential election.

“I think the faster route will be the Supreme Court,” Hope said. “Not only would this route help Virginia, it would help the entire country, and that’s how I hope this issue is resolved.”

Gorsline said the turnout at POFEV’s rallies, whether they are held in Arlington, in Lynchburg, as another was on April 16, or in Hanover County, where one is scheduled for May 1, demonstrates there are people of faith who hold pro-LGBT values.

Gorsline said that right-wing groups, such as the Family Foundation, a socially conservative think tank that has a strong influence over policies promoted by the Virginia General Assembly, often claim that advancing LGBT equality threatens their religious liberty. He countered that argument by pointing out it is the more liberal religious denominations that are being discriminated against for their beliefs.

“It’s a very clear thing for me, and for us, that, at the moment, our religious liberty is being denied,” Gorsline said. “As a pastor of a congregation that approves of marrying same-gender couples, encourages it, for good reasons, for the stability of families and all of that, I’m not allowed to do for them what I do for straight couples. The law should allow religions to make their own decisions.”

Even if same-sex marriage is made legal in the commonwealth, Gorsline noted, any denomination has the right to deny a religious marriage to a couple — same-sex or not — that does not meet its particular requirements.

Gorsline added that POFEV has plans to continue fighting for equality measures for LGBT people even if the courts eventually rule the ban unconstitutional. For instance, Gorsline said, a change in marriage law in the commonwealth will likely make it easier for same-sex couples to raise children, but will not completely change Virginia’s adoption laws, which allow single LGBT people to adopt or become foster parents, but not same-sex couples.

“Although a change in the marriage law would not automatically change laws on adoption and foster care, I think the current laws would be harder to maintain, which is why they’re trying anything they can to hold on, to stop the marriage thing,” said Gorsline. “It will be a fight, but we’ll win.”

John Riley is the local news reporter for Metro Weekly. He can be reached at jriley@metroweekly.com
← Previous Story Charge Against Sahle Dropped
Next Story → DC Center Gets $10,000 PrEP Grant

Related Itemsarlingtonmarriagepeople of faith for equality in virginiapofevvirginiawitness for love