Bipartisan support for ENDA grows in the House 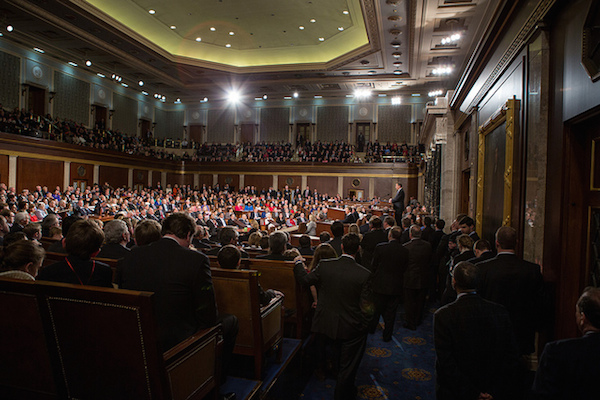 The number of House Democrats who are not cosponsors of the Employment Non-Discrimination Act dropped to eight Thursday as Rep. Jim Costa became the latest member of Congress to attach his name to the piece of LGBT-rights legislation.

The California Democrat’s support for ENDA, which would prohibit most employers from discrimination on the basis of sexual orientation and gender identity, comes one day after the bill gained its eighth Republican cosponsor in the House of Representatives.

As first reported by The Advocate, GOP Rep. Frank LoBiondo of New Jersey attached his name to ENDA on Wednesday. LoBiondo voted for ENDA in 2007, although that version of the bill did not contain protections for transgender Americans.

“[Congressman LoBiondo] has been meeting with local LGBT advocates and closely reviewing the Senate-passed legislation as well as current New Jersey state law,” spokesman Jason Galanes told The Advocate. “After signaling he would support the bill on the House floor, he decided to cosponsor the legislation.”

Costa’s office did not respond to a request for comment on his decision to cosponsor ENDA.

“The growing bipartisan support for ENDA in the House continues to put more and more pressure on Speaker Boehner to act, and it’s never been clearer to the LGBT community that only the Speaker stands in the way,” Drew Hammill, spokesperson for House Minority Leader Nancy Pelosi, told Metro Weekly.

But while ENDA continues to gain support in the House, with its number of cosponsors up to 206, there remains no clear path forward for its passage. Indeed, since ENDA passed the Senate last November with a 64-32 vote, the bill has languished in the Republican-controlled House of Representatives where Speaker John Boehner has voiced his opposition to the bill and refused to allow it to come up for a vote. (ENDA supporters inside and outside Congress have insisted that if Republicans allowed ENDA to come to the floor for a vote, it would have the votes to pass.)

Following the surprising primary defeat of House Majority Leader Eric Cantor (R-Va.) earlier this week by a tea party challenger, the prospect of progressive legislation advancing this Congress became even more unlikely. Although Cantor was not a supporter of ENDA, according to a political operative close to ENDA strategy in the House, many members are in the process of making personal calculations on whether to attach their names to the bill as cosponsors, which in some cases could mean putting their heads on the chopping block.

“Cantor’s loss has complicated the landscape and definitely put progressive issues in peril,” the operative said.

While the chances of progressive legislation advancing in the current Congress continue to dwindle, a debate has reemerged among activists over the scope of ENDA’s religious exemption — a point of contention that has long plagued the bill as currently written.

“It could provide religiously affiliated organizations – far beyond houses of worship – with a blank check to engage in employment discrimination against LGBT people,” the statement continued. “It gives a stamp of legitimacy to LGBT discrimination that our civil rights laws have never given to discrimination based on an individual’s race, sex, national origin, age, or disability. This sweeping, unprecedented exemption undermines the core goal of ENDA by leaving too many jobs, and LGBT workers, outside the scope of its protections.”

They argued, for example, that the religious exemption as written could allow for a Catholic hospital that employs people of other faiths to still be able to fire or refuse to hire an LGBT person.

NCLR and the Transgender Law Center, which both lauded ENDA’s passage in the Senate last year, have since rescinded their support for the bill due to the religious exemption, according to The Washington Blade. But while they argue ENDA’s religious exemption as written is broader than it is under Title VII of the 1964 Civil Rights Act for other minority groups and would open the door to LGBT discrimination in places far beyond churches and synagogues, narrowing ENDA’s religious exemption could also cause shaky Republican support to collapse entirely.

“For me, my job is I’m a mathematician trying to get to 218 votes,” out Rep. Mark Pocan (D-Wisc.) told Metro Weekly. “And if that’s the issue then we need to figure out how to get something done in this current environment. Either you change who is in those seats, which is something I’m working on for this fall, or we at least try to get something done as broad as possible, which can then be improved in the future when we have those opportunities. But certainly sitting back isn’t an option.”

According to Pocan, the discussion taking place over the religious exemption is important, but that plank of ENDA has proven just as important during his discussions with potential Republican supporters like Rep. Paul Ryan (Wisc.). “My particular role and those in Congress is getting to that magic 218,” Pocan said.

“ENDA in its current form is a bipartisan compromise and one that passed the United States Senate with a strong bipartisan vote,” said Drew Hammill, Pelosi’s spokesperson.

Regardless of the growing debate over ENDA’s religious exemption, advocates say it is imperative to continue to gather cosponsors so as to put members of Congress on the record absent a House vote on ENDA this session.

“The increasing support is in part due to all of the huge momentum we’re seeing across the country for LGBT equality overall,” Fred Sainz, vice president of the Human Rights Campaign, told Metro Weekly. “Members see this as the moral thing to do and the politically advantageous thing to do as well to sign up as a supporter of this bill. And that’s something we should continue to take advantage of so by the end of this session we can have as many cosponsors on the record as possible.”