), Disney’s live-action reimagining of Sleeping Beauty, this time told from the viewpoint of one of the House of Mouse’s greatest villains. As it transpires, the film’s narrator isn’t kidding — those who have watched the 1959 animated may find very little actually recognizable in this tale. Indeed, the full line states: “Let us tell an old story anew and see how well you know it.” Not well, it would seem. 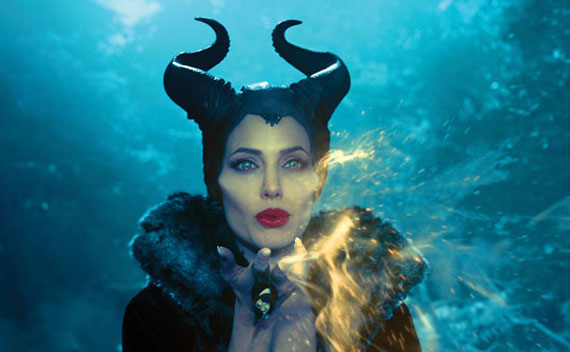 Maleficent holds particular cache among Disney’s most wicked antagonists. The self-proclaimed Mistress of All Evil (at least in the original film) curses Princess Aurora to die after being left off the official invite list to the child’s christening. Shrewd, powerful, utterly monstrous, she dominated the animated feature, her demise at the blade of Prince Philip a metaphorical (and, sadly, literal) double-edged sword. She was too wicked to live, too wickedly enjoyable to lose.

This time around, Maleficent resides in The Moors, a land filled with wondrous creatures and magic, bordering a human kingdom. The Moors are the epitome of paradise, a glowing, glistening place filled with exotic flowers, shimmering lakes and all manner of curious beings. The human land, by comparison, is your typical feudal system — war, hatred, greed and ambition are rife and ruinous. The human king covets The Moors, desiring its mysterious bounty, which causes deep mistrust between the factions. Maleficent, still a child, meets a human boy. The two quickly strike up a friendship and, over the years, grow closer. Love blossoms — true love, even — but as sweet as it is, it quickly sours. Stefan is human, and as such eventually succumbs to the greed and desire for power that all humans are apparently afflicted with. Maleficent is left alone.

When, then does she curse Aurora? Well, no spoilers, but a series of events — including one particularly disturbing scene that draws very real comparisons with sexual assault (though Disneyfied to keep younger viewers from getting the message) — cause Maleficent’s heart to harden and set into motion the curse that forms the core of the film’s plot. None of that, however, particularly matters.

The film’s script, penned by Linda Woolverton (Beauty and the Beast, The Lion King, the lackluster remake of Alice in Wonderland) is entirely inconsequential. Indeed, it could almost be described as trite. Aurora, who wasn’t the most developed of characters in the original film, is given little extra depth here, though Elle Fanning does her best to make her slightly less intolerably goggle-eyed than she otherwise would have been. The three pixies are no longer the caregivers they originally were — here they are bumbling, immature, underused and somewhat irritating. Though they are entrusted with Aurora, it is Maleficent who ends up taking care of her, from afar, guiding her towards her 16th birthday and her inevitable spinning-needle encounter, though she struggles with her growing attachment to the child. King Stefan (Sharlto Copley) is a villain, intent on destroying Maleficent, and though well-acted, even he can’t keep pace with the driving force of the film: Angelina Jolie.

Make no mistake, if you go to see Maleficent, do so for Jolie’s performance as the titular character. She becomes Maleficent, from steely gaze to withering remark, haughty tone to occasionally powerful moments of vulnerability. Jolie, whose transformation is aided significantly by some masterfully applied prosthetics, is everything you could want and more. She turns Maleficent into a character of surprising depth. She is heartbroken, battle-hardened, desperate for vengeance and yet, underneath it all, still susceptible to raw, honest emotion. Jolie’s performance captures all of this, whether battling with herself as she grows attached to the young Aurora, or destroying those who seek her head in battle. As we watch her transform over the film, from naïve fairy, to cold-hearted ruler, to softening caregiver, to repentant mother-figure, it is Jolie who grounds the performance, keeps the film on track and makes it all so utterly watchable.

So, too, is Sam Riley as Diaval, Maleficent’s loyal servant. Their back-and-forth offers yet another dynamic to her character, though he also suffers from a lack of depth, which is really Maleficent‘s main failing. Maleficent dominates every scene, and those lacking her suffer notably without her presence. It’s as though all effort was given to bring her character fully to life, with the film’s plot and secondary characters added to provide a reason to watch Angelina Jolie’s wonderful performance.

Which, I should add, I’m totally okay with. Sure, I’d have liked a more emotionally-impactful ending. Yes, I wish the $180 million budget had been less focused on the film’s beautiful visuals and used to craft a better narrative. Certainly, I’d have preferred less child-friendly sequences in favor of meatier action and dialogue. Of course I’d have liked Aurora to be more fleshed out, Prince Philip to be less of a bit part, several gaping plot holes to have been smoothed over (why did they burn all of the spinning needles in the castle?) — but, as the end credits roll, you won’t be thinking about any of that. You’ll look at the person next to you and say, “Damn. Jolie was excellent, wasn’t she?”

Rhuaridh Marr is Metro Weekly's online editor. He can be reached at rmarr@metroweekly.com.
← Previous Story Auntie Gay
Next Story → Ape S**t – “Dawn of the Planet of the Apes” review