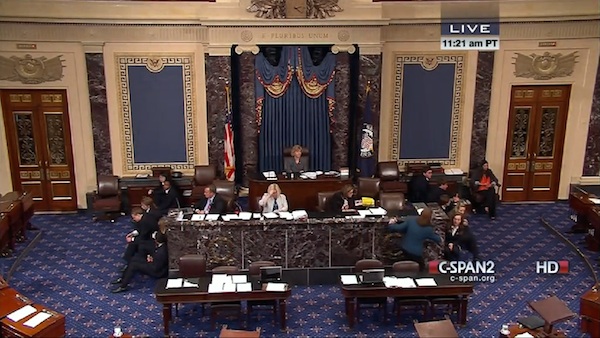 Two out African-American judicial nominees were confirmed to the federal bench by the U.S. Senate Tuesday, including the first out black man in the nation’s history to serve as a federal judge.

“As we’ve said before, these ‘firsts’ — and these milestones — are important, not because these judges will consider cases differently, but because a judiciary that better resembles our nation instills even greater confidence in our justice system,” wrote Neil Eggleston, counsel to the president, in a White House blog post, “and because these judges will serve as role models for generations of lawyers to come.”

Gayles’s confirmation comes after Obama’s original attempt to nominate the nation’s first out African-American male to the federal bench was thwarted by Sen. Marco Rubio (R-Fl.). Obama chose not to resubmit the nomination William Thomas to the Senate at the start of 2014. Thomas, who is also African-American and gay, was nominated by Obama in November 2012 to serve on the U.S. District Court for the Southern District of Florida — the same bench to which Obama later nominated Gayles. However, Thomas’s nomination hit an unexpected roadblock when Rubio retracted his support for Thomas.

In a statement to The Huffington Post, a spokeswoman for the Florida Republican said Rubio could not support moving forward with Thomas’s nomination after a review of his record raised “serious concerns” over his “judicial temperament” and “willingness to impose appropriate criminal sanctions.” Upon the nomination of Gayles in February, Rubio indicated to Metro Weekly he did not foresee having an objection to Gayles.

“I am thrilled that the Senate has confirmed Attorney Yandle and Judge Gayles to the federal bench,” said Sharon Lettman-Hicks, executive director of the National Black Justice Coalition, in a statement. “NBJC celebrates both confirmations that will inspire so many in the Black and LGBT communities. In addition, we celebrate the vast life experiences that they will take with them to the federal bench as they work to render impartial decisions. It’s a significant sign of progress in our nation when two individuals are judged solely on their merits when being considered for these important lifetime appointments.”

The first out African-American to serve as a federal judge is Deborah Batts, who was appointed to the District Court for the Southern District of New York by President Bill Clinton in 1994.