Such Pushovers: It’s easy to fall for this catchy folk/pop lesbian trio

Looking for a new summer jam? Consider “XOXO,” the last track on the debut album Falling For It from the lesbian folk/pop trio The Pushovers.

Featuring edgy, slow-burning verses that melt into a bright girly chorus, the ’80s-stamped, EDM-esque song stands out from contemporary pop radio by virtue of the Pushovers’ signature three-part harmony — which factors into even the rap from Liz DeRoche. “It’s a harmony rap, which is kind of amazing,” Mara Levi says. A high school music teacher, Levi initiated forming the band nearly six years ago at D.C.’s Phase 1, recruiting first vocalist/guitarist Nancy Eddy and then DeRoche, who also plays keyboards and drums. DeRoche, known as “the Singing Lizard” for her work as an “electro-kindie” act making music for kids, is also a member of the band supporting local musician Tom Goss. 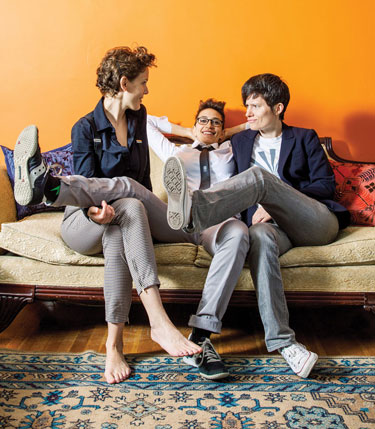 Falling For It was years in the making, in large part because the women are an “LDB,” or “long-distance band.” Only DeRoche remains in D.C., as Levi has uprooted to Brooklyn and Eddy to Baltimore. But the final product proves it was worth the wait, and worth the more than $10,000 that fans contributed via Kickstarter, a website that helps artists fundraise in order to launch various creative projects. In addition to hiring designers for high-quality t-shirts and posters, the upfront funds from fans allowed the band to record with a D.C. hardcore punk scene pioneer, rocker/producer J. Robbins — “an incredible musician whose talents are all over this record,” as DeRoche puts it. The strong, wide-ranging debut album includes the first song the band wrote together. The catchy, punchy It Gets Better-themed anthem “Boy or Girl” finds the women chanting “Step off” to the naysayers and bullies who ask, “Are you a boy or a girl? Why don’t you fix up your hair?”