The next iPhone and the need to supersize our devices 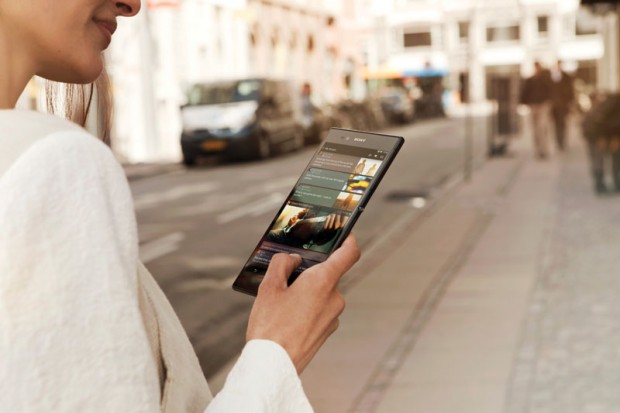 It’s official, people: bigger is better. It’s something we can no longer ignore — our smartphones are swelling to ever-greater sizes following years of shrinkage, and we’re lapping up these behemoths in droves.

In 2010, when discussing the possibility of making the iPhone bigger to combat the iPhone 4’s infamous antenna problems, Steve Jobs staunchly stated that they could make a phone big enough that “you can’t get your hand around it” but that “no one’s going to buy that.” He was, of course, referring to the iPhone’s Android competitors, which were utilizing displays, on average, around 4 or 4.3 inches large – these “Hummers,” as Jobs described them, dwarfed the 3.5-inch iPhone. He was adamant that the iPhone’s small screen was the “perfect size for consumers” and the iPhone stayed the same size through four iterations. We all know how that ended, though – under a barrage of criticism and with rival devices outclassing the iPhone in both size and display quality, Apple responded by stretching the iPhone. To 4 inches.

By this point, when the iPhone 5 debuted in September of 2012, its rivals had already gone bigger. Much bigger, in fact. Samsung launched the Galaxy S III in July of that year, which featured a 4.8-inch display. However, that was nothing when compared with its distant cousin, the Galaxy Note. The Note family first entered the world the previous year, launching in the fall of 2011 as a stretched version of Samsung’s hugely popular Galaxy S II. While the S II featured a display measuring 4.3 inches, the Note offered a display of 5.3 inches. It was, for all intents and purposes, vast. Reviewers couldn’t understand the need for the device, claiming it was too big, too unwieldy, ignoring its HD resolution and long battery life, and spending countless column inches comparing it to the iPhone – a device it was in no way meant to compete with. The iPhone 4S was so small in comparison, it could fit completely inside the display area of the Galaxy Note, with room to spare. And yet, despite some backlash over its size, it was a success. Samsung shifted one million of the oversized phones its first two months, with sales eventually climbing to ten million by fall of the following year. It also kick-started a new, horrible word: phablet. A device that straddles the line between a phone and tablet.

When Apple felt ready enough to introduce its larger iPhone in September of 2012, Samsung was preparing to launch the Note’s successor, the Note II. While Apple fans claimed that the new 4-inch display, with its sub-HD resolution, was revolutionary and life-changing, Android fans were embracing 4.7 and 4.8 inches as the norm. Samsung went even further – the Note II debuted with a 5.5-inch display, officially stretching the limits of what a smartphone should be. By the time its third iteration launched in the fall of 2013, it had reached 5.7 inches and sold 40 million units worldwide, with the Note III adding another ten million to that total before Christmas. The rest of the Android crop adopted 5 inches as the new norm, a full inch greater than the iPhone.

If you want to make a statement in the mobile world, a large smartphone seems to be the way to go. Sony launched the Xperia Z Ultra last summer, which sported a 6.4-inch display and was a mere 0.26 inches thick. HTC tried to draw customers with the One Maxx, which sported a 5.9-inch display. Nokia wanted to extoll the virtues of Windows Phone, so crafted the 6-inch Lumia 1520 and jammed it full of up-to-date hardware – a device so outlandishly brilliant that this writer owns one and uses it as my daily phone. I also own the third iteration of the Galaxy Note – just like I owned the first and second versions. I do not own an iPhone for the simple reason that, after getting accustomed to the screen real estate of such large devices, to drop down to four inches would be ridiculous.

Perhaps, then, the constant rumors from the land of all things Apple should excite me. It would seem that, for the launch of the iPhone 6 this fall, Apple is planning something rather special. Tired of the comments regarding the size of current iPhones, Cupertino is reportedly lining up two supersized smartphones for consumers. The first is a 4.7-inch device, which will put it in line with midrange Android devices like the Motorola X. It is seemingly all but guaranteed to be launching in September. On top of that, though, there are strong rumors that a second device will also launch – though possibly later, due to production issues. This second iPhone will take iOS to new heights on a smartphone, with a 5.5-inch display – bigger than the Galaxy S5, even, which is currently sporting a 5.1-inch affair.

If it’s true, it will make for a much more interesting iPhone. At last, Cupertino’s software and hardware will be at a size where Android and Windows Phone users will feel comfortable making the switch without sacrificing the screen real estate they’ve come to love on their devices. It’s a shrewd move by Apple, if it turns out to be true – they can keep the older iPhones for those used to something smaller in their hands, and those who like them bigger can upgrade to either one of the new devices.

It would seem that phablets – so ridiculed when the original Note launched – are now becoming something of a standard for top tier devices. Even Google is reportedly supersizing its next Nexus device, which typically offers the best available current hardware and the freshest Android software at a bargain price, utilizing a 5.9-inch display. If that transpires to be true, we could be seeing smartphones closer to 6 inches becoming an accepted, natural size point for all new flagship devices – as it stands, current Android devices are trending closer to the 5-inch size. Whatever Apple or Google do, however, the phablet – I really hate that word but it’s also very descriptive – is here to stay. Samsung is gearing up for the Note 4 this fall, and I really hope the new Microsoft-owned Nokia puts out an updated version of the 1520 around the same time. I’m a smartphone size queen and proud to admit it. Bigger is better — roll on, supersized iPhone.

Rhuaridh Marr is Metro Weekly's online editor. He can be reached at rmarr@metroweekly.com.
← Previous Story To the Moon and Back on 4KB of Memory
Next Story → Windows Clone