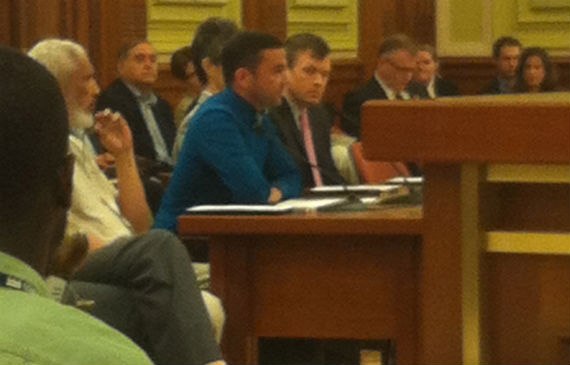 Rev. Graylan Hagler, Dr. Gregory Jones, and Andrew Barnett of Supporting and Mentoring Youth Advocates and Leaders (SMYAL), testify in favor of the Council bill banning the practice of reparative therapy on minors.

Councilmember Yvette Alexander (D-Ward 7) presided over a nearly five-hour hearing on Friday where she listened to testimony for and against a bill pending before the D.C. Council that would seek to ban reparative or conversion therapy by prohibiting licensed therapists from attempting to change the sexual orientation or gender identity of minors under the age of 18. Therapists found engaging in such practice could be subject to penalties or risk loss of their license.

The bill, known as the Conversion Therapy for Minors Prohibition Amendment Act of 2013, introduced by Councilmember Mary Cheh (D-Ward 3), would restrict mental health professionals from attempting what the bill labels as “sexual orientation change efforts” on minors. Similar bills have passed with bipartisan support in California and New Jersey, rejected by a vote in Illinois, and have denied floor votes in 12 other states, including Virginia.

More than 30 witnesses in total testified at Friday’s public hearing in front of the Committee on Health, which Alexander chairs. Most notably, the bill has drawn opponents from socially conservative organizations such as the Family Research Council and the religious right, as well as from a number of “ex-gay” organizations and foundations that engage in reparative therapy to help patients eliminate what they call “unwanted same-sex attraction.” Many of those opposing the bill testified that they had undergone therapy from a licensed practitioner or counseling via their church group to deal with childhood traumas, such as sexual abuse, and, as a result, had been able to rid themselves of feelings of confusion surrounding their sexual orientation or gender identity.

Testifying in favor of the bill were LGBT rights organizations or pro-LGBT organizations such as the Human Rights Campaign (HRC), the Southern Poverty Law Center (SPLC), the Gay and Lesbian Activists Alliance (GLAA), The DC Center for the LGBT Community, and numerous therapists, social workers, and counselors who believe that so-called “conversion therapy” is ineffective and its efficacy is not backed up by scientific research or evidence.

Perhaps the most spirited defense of reparative therapy came from David Pickup, a family and marriage therapist licensed in California and Texas who is seeking to be licensed in the D.C. area. Pickup, who identified himself as a board member of the National Association for Research & Therapy of Homosexuality (NARTH) is the lead plaintiff in the case of Pickup v. Brown, a lawsuit challenging California’s ban. Pickup, who identifies as ex-gay, accused the Council of engaging in “an act of hatred” against those who wish to get rid of unwanted same-sex attractions – ex-gays are included among the groups protected by the District’s Human Rights Law – and he and other opponents of the bill claimed that the bill is an overreach that violates the First Amendment rights of therapists and counselors.

“One of the egregious mistakes that is being made is that the way the law is worded, it will make it impossible for a heterosexual boy who is abused to seek treatment and prevent a therapist from doing anything to help him reduce or eliminate homosexual feelings,” Pickup told Alexander during his testimony. He also said that some of the stories of therapies recounted by supporters of the bill who attempted to change their sexual orientation have nothing to do with reparative therapy as practiced by responsible, licensed counselors.

While Pickup told Alexander on Friday that he believed the Supreme Court would hear his appeal of a ruling by the Ninth Circuit Court of Appeals upholding California’s ban, he was dealt a blow on Monday after the high court refused to hear the case. As a result, the Ninth Circuit’s ruling is allowed to stand, keeping the ban in place. The Ninth Circuit had previously ruled in August of last year that the ban covered professional activities that are within the purview of the state to regulate and license, and that it “does not violate the free speech rights of practitioners or minor patients, is neither vague nor overbroad, and does not violate parents’ fundamental rights.”

Still another issue of contention for opponents was the idea that therapists would be prevented from helping their underage patients, even if it was the patient – and not the parents, as many supporters claim – who wanted to be rid of same-sex attraction. Peter Sprigg of the Family Research Council (FRC) accused the American Psychological Association of being “under the sway of a pro-homosexual lobby,” adding, “Critics cannot claim there is no evidence, only that it doesn’t meet some gold standard” that reparative therapy can help lessen feelings of same-sex attraction.

Greg Quinlan, of Parents and Friends of Ex-Gays and Gays (PFOX), was more blunt, blasting the bill as an “aggressive overreach.”

“This bill runs miles ahead of the science for purely political and ideological reasons,” Quinlan said angrily.

But supporters of the bill pushed back against the ex-gays’ and their allies’ claims, noting that there is nothing in the bill to prevent a child who has been abused, for example, from seeing a therapist or counselor to deal with the negative after-effects of abuse, and talking about their feelings or confusion regarding same-sex attraction as part of therapy. Rather, they note, the bill simply prohibits counselors from “serving as advocates for their own personal or religious beliefs,” as Rev. Graylan Hagler, the senior pastor of Plymouth United Church of Christ and an independent candidate running for the Council, expressed when testifying in support of the bill.

“Presently there is insufficient evidence supporting the efficacy of such treatments,” testified Dr. Anthony Jiminez of the District of Columbia Psychological Association, noting that his organization respects the diverse views of others, including those who object to homosexuality based on religious or moral views. However, he noted, “The idea that sexuality is a choice is absolutely unfounded.”

Most compelling was the testimony of those who said they went through therapy to deal with their same-sex attraction or sexual orientation. Chuck Peters, an ex-gay from Beverly Hills, Calif., who came to testify against the bill, told how he had been abused as a child and left struggling with confusion over his sexuality. After receiving reparative therapy, he was able to overcome the emotional trauma of his abuse, marry a woman, and start a family. He said he believes minors who are denied the possibility of seeing a counselor for those issues will commit suicide out of despair. Or worse, he said, they and their parents will be driven underground and forced to seek help from unlicensed therapists or counselors.

“I would have killed myself if I had not gone to a licensed therapist,” Peters said.

But Matthew Shurka, who came out at age 16 in a conservative community, said that even though his father accepted him initially, his parents were swayed to enroll him in reparative therapy by an “expert” therapist who told them there was no such thing as homosexuality.

For the next three years, Shurka testified, he was forced to avoid women – including his own mother and sisters – and all contact with them, even though they lived in the same house. His grades suffered. Suicidal thoughts and feelings of depression and anxiety increased. After the three years of avoiding female influences, he was later prescribed Viagra pills because he couldn’t perform sexually with women. Finally, at age 21, he decided the therapy was not working and sought out mentors from the LGBT community on his own, eventually accepting his sexuality.

Alexander indicated during the course of the hearing that further changes to the bill would be made in a mark-up session. At several points, she asked supporters if it would be better if the age under which reparative therapy is banned for minors should be lowered to 16, which is the age of consent in the District. All those testifying rejected that proposal. Alexander also seemed favorable to an amendment suggested by Dr. Rikin Mehta, the senior deputy director for the D.C. Department of Health. Mehta testified that the Department of Health would prefer an amendment that would enable it to initiate investigations, independently of a licensing board, into therapists or counselors suspected of engaging in reparative therapy or sexual orientation change efforts.

It is likely that the Council will pass the ban on reparative therapy, as 12 of the 13 councilmembers, including Alexander, but minus Councilmember Marion Barry (D-Ward 8), have signed on as cosponsors.

David Meadows, the director of communications for Councilmember Anita Bonds (D-At-Large), told Metro Weekly that the councilmember is favorably disposed toward the bill.

“Anita Bonds supports this bill, and looks forward to voting for it,” Meadows said.

If the bill passes the council, is signed by Mayor Vincent Gray (D) and survives a 30-day congressional review period, the District would become the third jurisdiction to ban such therapy for minors. But adults who struggle with same-sex attraction would still be able to choose, of their own accord, whether to submit to reparative therapy.

That distinction is important to Andrew “Jud” Brown, who went through reparative therapy at the Richmond branch of the now-defunct ex-gay organization Exodus International. Though Brown underwent the therapy as an adult, he believes the practice should not be carried out on minors. Brown testified that the counselor he was seeing would ask him personal, invasive questions about his sexuality and even, at one point when it was clear his attractions weren’t subsiding, suggested that he remain single and celibate for life. Brown said he began to think of suicide, but ended the sessions. Although he later came to accept his sexual orientation, Brown said the therapy he had received “fractured my identity.”

“In Mark 3:25, it says ‘If a house is divided against itself it cannot stand,’” Brown said. “What that means to me is that a man divided against himself can never know peace.”

John Riley is the local news reporter for Metro Weekly. He can be reached at jriley@metroweekly.com
← Previous Story Rebranding AIDS Walk
Next Story → Calling All Candidates