For a few brief hours Wednesday, California will have its first openly gay governor. 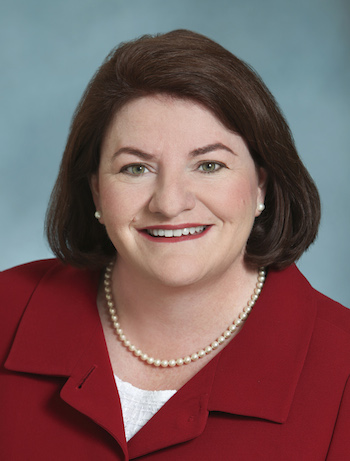 California State Assembly Speaker Toni G. Atkins (D), who is gay, will serve as the state’s governor for 8 to 9 hours while those Democratic officials above her in the line of succession are traveling outside of the state. Atkins’s turn in the governor’s seat comes as Gov. Jerry Brown departed for Mexico on Sunday to lead a trade mission. In his absence, Lt. Gov. Gavin Newsom served as acting governor, but Newsom left California Tuesday to attend an event for the Special Olympics. Senate President Pro Tem Darrell Steinberg will then serve as acting governor until he leaves for Chicago Wednesday. In the hours between Steinberg’s departure and Brown’s return later today, Atkins will serve as acting governor.

“I feel so grateful to fill the role as Acting Governor today,” Atkins wrote on Facebook. “I wish my parents could see this. Now I know that may sound hokey to many. But honestly, this is what is going through my mind. If Governor Brown wants a few more days away I’m here for him!”

Although she’ll only be in the role for a few hours, Atkins becomes the second out governor in the nation. New Jersey Gov. James McGreevey became the nation’s first openly gay governor in 2004 when he revealed he is gay the same day he admitted to cheating on his wife and resigned from office. No openly gay person has ever been elected governor to a state, although Democrat Mike Michaud, who currently serves in the U.S. House of Representatives and came out last November, is hoping to change that in Maine in his attempt to defeat Republican Gov. Paul LePage

“I recognize that my short time as acting governor will probably prove to be uneventful (and I hope it will be uneventful!). But I’m also thinking today about how a young girl who grew up in poverty in Virginia ends up as Speaker and therefore gets the opportunity to be Acting Governor,” Atkins said in a statement to The Washington Post. “What that says about our opportunities as Americans and our democracy are profound. And I will continue to spend my time as a legislator in this great state ensuring that all California kids have access to that American Dream – the California Dream – by supporting access to health care, affordable housing and educational opportunities.”

One of my 1st responsibilities today as #ActingGov was to make sure the #ActingFirstDogs got their morning walk. pic.twitter.com/PhbSQonOHj