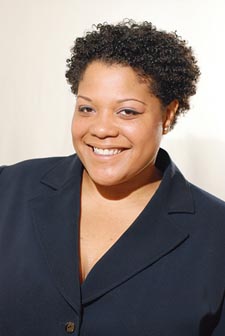 Courtney Snowden, a Democrat-turned-Independent seeking one of two at-large seats up this election cycle, received a boost when she netted an endorsement from the Gay & Lesbian Victory Fund on July 22.

The Victory Fund, a national organization focused on electing openly LGBT candidates to local, state and federal office,  has previously endorsed mayoral candidate David Catania and Ward 1 State Board of Education candidate Scott Simpson. Snowden faces 12 other independent candidates, as well as four major party nominees: incumbent Democratic Councilmember Anita Bonds, openly gay Republican Marc Morgan, Statehood Green Party nominee Eugene Puryear and Libertarian Frederick Steiner. Because of D.C.’s Democratic tilt, Bonds is largely expected to be the top vote-getter in November. The remaining seat up this cycle – one of at least two that must be reserved for members of minority parties – will go to the person who gets the second highest number of votes.

In order to obtain Victory Fund’s endorsement, candidates must show political viability, including an ability to run a campaign and fundraise, and must be openly LGBT and pro-choice on the issue of abortion rights.

“As a native Washingtonian, Courtney Snowden has been a staunch advocate for students and education from the start,” said Chuck Wolfe, the president and CEO of the Gay & Lesbian Victory Fund. “Her commitment to creating a city of integrity and transparency will be a tremendous asset on the City Council.”

Snowden released her own statement thanking the Victory Fund for their endorsement.

“I am honored to have the Victory Fund’s endorsement,” she said. “This endorsement highlights only a part of my story that I am proud of – I am a sixth generation Washingtonian who grew up in the Shepherd Park community in Ward 4, and now, I reside in Deanwood, east of the river, in Ward 7. I am also a proud graduate of DC Public Schools. I am a single mom of the most perfect little 5-year-old, Malik, and, yes, I am a lesbian. But just as important, I am so proud to be a daughter of a city that celebrates all of these pieces of me. I hope voters across the city, corner to corner, will see a little of me in them and work with me to move D.C. forward, together.”