When the Kennedy Center planned a festival over Labor Day Weekend, Gregg Henry says, “Everyone said, ‘You’re freaking nuts. It’s the last gasp of summertime. People are going to want to drink a beer at the beach.'”

But the theater-focused Page-to-Stage Festival has drawn sizable holiday crowds to the city’s leading arts institution since Henry curated the very first edition in 2002. Roughly 3,300 people attended last year’s festival, where more than 40 theater companies from the area presented free staged readings, workshops and rehearsals of new works. These groups get an unprecedented way to road test and get feedback on shows in various stages of development. 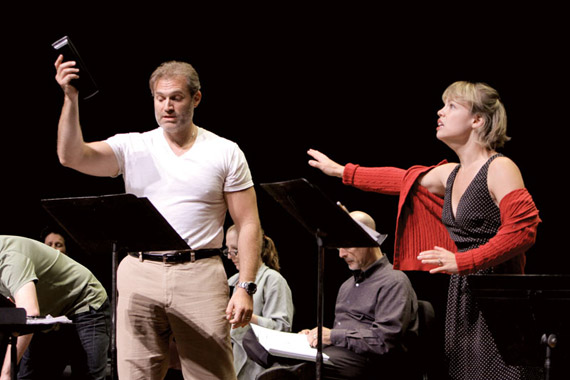 The festival also provides the public a preview of upcoming productions. For starters, a vast majority of plays showcased at Page-to-Stage go on to full productions at the presenting companies. Additionally, some works, including Shakespeare in Hollywood and a few other plays by D.C.-based playwright Ken Ludwig, have gone on to have productions around the country. An example from this year’s 13th annual festival is the fact that it showcases more than 30 female playwrights — a kind of prelude to next fall, when 50 area theaters will participate in the Women’s Voices Theater Festival by each producing a world-premiere play by a female dramatist.

In many respects Page-to-Stage has become another way for Henry to advance and promote D.C.’s increasingly rich theater scene to the Kennedy Center’s various national audiences. Henry also does this through the Kennedy Center American College Theater Festival he co-manages and directs. “The great thing about D.C. is artists with a passion, and artists with skill, work here,” he says. “You can come to D.C. as a young artist and actually get to work pretty immediately.”

The Page-to-Stage Festival is Saturday, Aug. 30, through Monday, Sept. 1 at the Kennedy Center. Free. Call 202-467-4600 or visit kennedy-center.org for more information and a performance calendar.

Doug Rule covers the arts, theater, music, food, nightlife and culture as contributing editor for Metro Weekly. Follow him on Twitter @ruleonwriting.
← Previous Story Killing Monsters at Rorschach Theatre
Next Story → The Free For All aims to bring Shakespeare to everyone