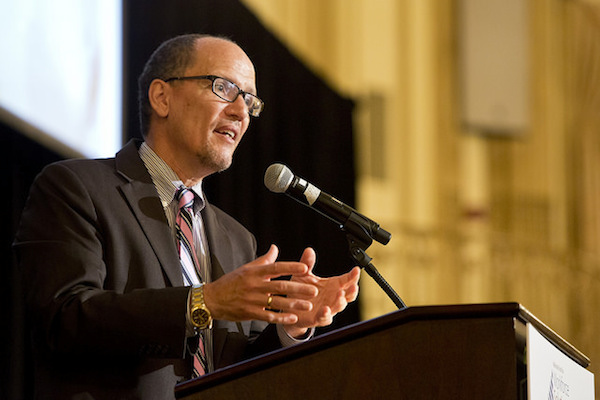 The Labor Department issued guidance Tuesday clarifying that discrimination against the employees of federal contractors on the basis of transgender status is considered discrimination based on sex under federal law.

In a blog post published Tuesday, Director of the Office of Federal Contract Compliance Programs Patricia Shiu confirmed the guidance had been issued “clarifying that sex discrimination extends to gender identity and transgender status.”

The announcement comes more than two years after the Equal Employment Opportunity Commission (EEOC) found in Macy v. Holder that “sex discrimination,” which is prohibited under federal law, includes discrimination against transgender people. But in the years since that ruling in April 2012, the Labor Department would not indicate whether it was applying the decision to protect transgender employees of federal contractors. At that time, Executive Order 11246 prohibited federal contractors are prohibited from discrimination on the basis of of race, color, religion, sex or national origin.

During a surprise visit to the White House press briefing in February, Labor Secretary Perez said that the application of the EEOC ruling was still under review.

“That issue is under review in the aftermath of the Macy decision. And I’ve asked my staff to expedite that review so that we can bring that issue to conclusion at the Department of Labor,” Perez said, adding that he hopes the review “will come to an end as soon as possible.”

In June, Perez went further, making clear that guidance would be issued to update “enforcement protocols and anti-discrimination guidance to clarify that we provide the full protection of the federal non-discrimination laws that we enforce to transgender individuals.”

That announcement came after the White House indicated on June 16 that President Barack Obama would sign a long-sought executive order prohibiting federal contractors. Executive Order 11246, which Obama amended to include those LGBT protections, is enforced by the Office of Federal Contract Compliance Programs.

According to the Human Rights Campaign, the guidance will both equip employees of federal contractors experiencing discrimination with an additional avenue to file a complaint outside of the EEOC process and put employees on notice of existing nondiscrimination regulations.

“The Labor Department guidance issued today is a giant step toward ensuring American workers are judged based on the work they do, and never because of a fundamental aspect of who they are – like their gender identity,” said HRC Legal Director Sarah Warbelow in a statement. “Transgender people face some of the highest levels of discrimination in our community, particularly in the workplace. And while explicit workplace protections are still needed at all levels of government, transgender people who work for federal contractors can now use this guidance as further protection from discrimination on the job.”