Of Recalls and Coal Rollers 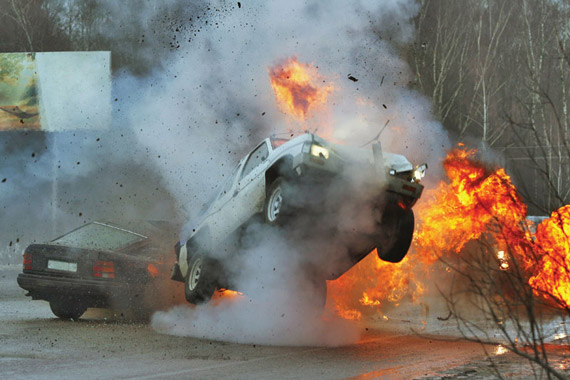 If you’re sick of hearing about vehicle recalls, don’t worry, you’re far from alone. Apathy is a risk in a year where manufacturers have recalled millions of vehicles, smashing previous records for the total number of vehicles being yanked off the market. General Motors alone has issued recalls for a staggering 26 million vehicles in the United States, covering 54 separate faults, ranging from the potentially fatal ignition switch defect that is at the center of an ongoing lawsuit to such benign issues as loose floor mats.

In May, GM was ordered to pay $35 million by federal safety regulators for withholding information related to the ignition switch fault for over a decade, ultimately resulting in at least 13 fatalities and 54 crashes. Of course, that figure — though a record for automotive manufacturer fines — is a drop in the ocean for a company that reported revenue of $155 billion in 2013. If that seems a slightly imbalanced punishment for GM, and the executives who helped to conceal the defect, then Sen. Claire McCaskill (D-Mo.) has a solution. McCaskill sits on the Senate Committee on Commerce, Science and Transportation, and has clearly had enough of executives at auto companies that fail to treat recalls with the seriousness they deserve.

Enter, then, the Motor Vehicle and Highway Safety Enhancement Act, which the Show-Me State senator hopes will light a fire under automotive executives. The bill doubles the budget for the National Highway Traffic Safety Administration, but also removes the $35 million limit imposed on fines against automakers — the same limit which saved GM from a potentially more massive fine. How far will new fines go? The bill would change the current per-vehicle fine, which sits at $5,000, to $25,000 per affected vehicle. Had GM been prosecuted under McCaskill’s proposed bill, they’d have been subject to $55 billion in fines — 1500 times what they actually paid.

Still not far enough? McCaskill’s bill would also place the burden of responsibility on executives who work to cover up or delay recalls. Should an executive be found to have knowingly deceived customers and the government, they could face life behind bars. The bill would give federal prosecutors “greater discretion to bring criminal prosecutions for auto safety violations and [increase] the possible penalties, including up to life in prison for violations that result in death.”

Don’t think that Senator McCaskill is only focused on fatal faults in vehicles, though, as she also wants executives to serve up to 15 years in prison should a delayed recall lead to serious injuries for drivers or passengers of affected vehicles.

“With millions of Americans behind the wheel every day, and more than 33,000 killed on our roads each year, we’ve got to do more to keep our cars and the roads we drive them on safe,” said McCaskill, according to The Detroit News. “Painful recent examples at Toyota and GM have shown us we also must make it easier to hold accountable those who jeopardize consumers’ safety. For too long, auto safety resources have remained virtually stagnant while cars and the safety challenges they present have become more complex.”

The prospects of McCaskill’s bill aren’t fully known — though automakers are bound to lobby hard against it — but, should it pass, it would certainly be an effective deterrent against future wrongdoing by the car makers we entrust our lives to every time we get behind the wheel.

If that’s all a little heavy — or you dozed off the moment I mentioned “recalls” — Senator McCaskill’s bill wasn’t the only legislative proposal of the last week. In New Jersey, State Assemblyman Tim Eustace (D-Bergen Co.) has submitted bill A3583. What is it? A proposal to make illegal the practice of “coal rolling.”

Should you be unaware of coal rolling, here’s a brief introduction: Certain owners of diesel trucks retrofit their vehicles, removing the normal exhaust and particulate filter, allowing them to belch thick clouds of smoke from the engine. Diesel engines produce large amounts of smoke when running without sufficient oxygen, though the smoke can be produced in even the most efficient of diesel engines under hard acceleration. Coal rollers rev their engines to produce thick, toxic clouds of smoke, often for fun, but also, more recently, as a political statement. Drivers of green cars — the electric Nissan Leaf, the extended range Chevrolet Volt and hybrids such as the Prius, for example — are hunted down by coal rollers who then overtake them, rev their engine and coat their car in a thick cloud of smoke, obscuring the driver’s vision in a dangerous statement against green cars, emissions controls and environmental laws which seek to make cars more efficient and cleaner.

Eustace was one such driver who fell victim to the coal rollers. According to NJ.com, Eustace was driving his electric Leaf along the New Jersey Turnpike when he was purposefully hit by a blast of smoke from a passing truck.

“People had been telling this has been going on, but I hadn’t seen it,” he said. “I was surprised to experience it myself.”

His response is the aforementioned bill — which sadly lacks a snappy name — that seeks to “[Prohibit] retrofitting diesel-powered vehicles to increase particulate emissions for the purpose of ‘coal rolling’ … [and] prohibits the practice of ‘coal rolling.'” Should the bill pass, anyone caught violating the law would be subject to a hefty fine from New Jersey’s Department of Environmental Protection.

Whether it would be effective, though, is less clear. Coal rolling is already illegal, according to the Environmental Protection Agency. The EPA’s website clearly states “It is a violation of the [Clean Air Act] to manufacture, sell, or install a part for a motor vehicle that bypasses, defeats, or renders inoperative any emission control device.” Regulations from the state’s own Department of Environmental Protection enforce that vehicles “shall not emit visible smoke, whether from crankcase emissions or from tailpipe exhaust, for a period in excess of three consecutive seconds.”

Such measures have failed to limit the prevalence of coal rolling, which has spread as a meme across the Internet, with numerous videos showing drivers hooting and hollering as they blast smoke at cars on freeways, city streets and on rural roads. Eustace himself isn’t sure that it’s a political statement. “I wish it was that thought out,” he said. “I think it’s just youthful ignorance.”

Youthful ignorance or not, it won’t take much for coal rollers to shoot themselves in the foot. Should rolling coal in the face of another driver lead to a fatal or serious crash, law enforcers could crack down harder on a practice that is nothing short of immature and stupid — and that’s before the health impacts of uncontrolled diesel emissions is taken into account. Eustace’s bill is unlikely to take effect, given the overlap with current laws, but it’s sure to spread a little more awareness of the ignorant plight of the coal rollers.