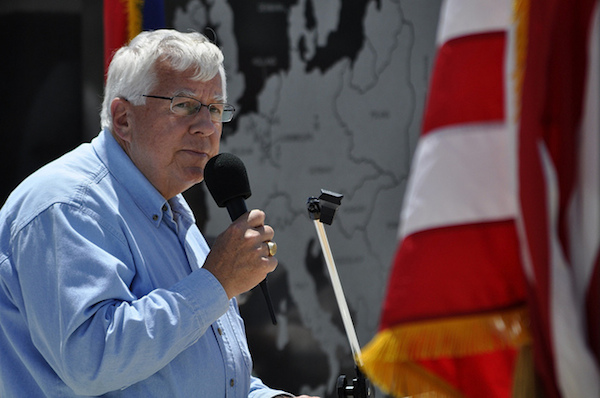 Legislation introduced in Congress this week aimed at protecting the religious beliefs of child welfare service providers is drawing criticism from LGBT-rights advocates who say the bill would open a “floodgate of adoption discrimination.”

Authored by Wyoming Sen. Mike Enzi (R) and Pennsylvania Rep. Mike Kelly, the Child Welfare Provider Inclusion Act seeks to protect the “sincerely held religious beliefs or moral convictions” of child welfare providers and would prohibit government entities from “discriminating or taking an adverse action” against a provider who declines to provide services that conflict with those beliefs. The bill also calls on the secretary of Health and Human Services to withhold 15 percent of federal funds a state receives for child welfare programs if that state violates the act.

“This bill is about fairness and inclusion. It is about ensuring that everyone who wants to help provide foster or adoptive care to children is able to have a seat at the table,” Kelly said in a statement. “There is no good reason why any of these care providers should be disqualified from working with their government to serve America’s families simply because of their deeply-rooted religious beliefs.”

Enzi added that the bill would allow adoptive and foster parents have access to providers of their choice. “Faith-based charities and organizations do an amazing job of administering adoption, foster care and a host of other services. Limiting their work because someone might disagree with what they believe only ends up hurting the families they could be bringing together,” he said in a statement.

But according to LGBT-rights advocates, the bill would allow adoption discrimination based on parents’ religion, marital status, sex, sexual orientation, gender identity, among other reasons. Although the bill’s language does not explicitly mention adoption by same-sex parents, they argue the bill would allow “rampant discrimination” against gay and lesbian couples if it were to become law.

“It’s increasingly clear that, post-Hobby Lobby, some in positions of power believe that religious freedom should only belong to a few,” said Ellen Kahn, director of the Human Rights Campaign Foundation’s Children, Youth, and Families Program, in a statement. “If this bill passes, an Evangelical straight couple, a single father, or a committed and loving gay and lesbian couple could find their path to adoption blocked for no reasonable reason other than naked discrimination.”

The bill was introduced with 29 cosponsors in the House, all of whom are Republicans. The number of Senate cosponsors is not yet available. The legislation also marks the latest debate over religious liberty that has been spurred by a string of legal and political wins for marriage equality, differences over religious exemptions in federal law, as well as the Supreme Court’s decision in the Hobby Lobby case.

While Republicans on Capitol Hill have been coded about the bill’s intentions, representatives from the Family Research Council (FRC) have been quick to admit the bill targets states that prohibit adoption and foster care provides from discrimination against same-sex couples.

“This important legislation would prohibit states receiving federal funds from discriminating against faith-based child welfare service providers in licensing, contracting, and funding — addressing a troubling trend of discriminatory actions by state and local governments in Illinois, Massachusetts, California, and D.C.,” Tony Perkins, president of FRC, wrote in a newsletter to supporters. “In the state of Illinois alone, religious adoption and foster care providers were forced to stop serving over 2,000 children when the state refused to allow agencies to continue operating based on their belief that kids deserve both a mom and a dad. Congressman Kelly’s and Enzi’s legislation would correct such discrimination by prohibiting actions targeting faith-based providers and penalizing states receiving federal funding for child welfare services if they unfairly squeeze out faith-based groups.”

According to FRC’s David Christensen, the bill would “ensure that the interests of children are placed ahead of political correctness.”

“It’s a sad sign of the times that some states have preferred to sever longstanding partnerships with faith-based providers rather than allow them to continue caring for and placing children informed by traditional moral beliefs about the family,” Christensen wrote in an action alert to FRC supporters.

But with LGBT-rights advocates having fought religious freedom bills in states such as Arizona and Mississippi that would arguably provide a “license to discriminate,” and as the religious exemption of the Employment Non-Discrimination Act (ENDA) seems unlikely to be attached to future versions of the bill, tolerance for “religious freedom” legislation targeting LGBT people appears to be at an end.

“Taxpayer funds should not be used to discriminate, and too many children need loving families right now for our elected officials to be playing these kinds dangerous political games,” said HRC’s Kahn. “This bill has nothing to do with faith, and it must be condemned.”