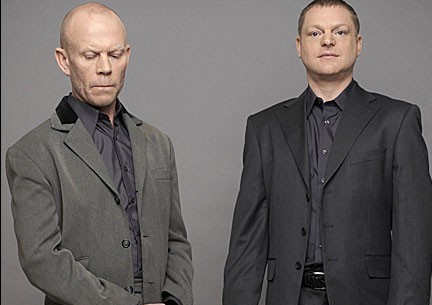 Nearly 30 years into their remarkable career, and Erasure is still going strong. The legendary British pop duo is about to release their latest album, The Violent Flame (due on 9/22). The outstanding first single, “Elevation,” is already available. The duo will be making a pair of sold-out appearances at the 9:30 Club this coming Friday and Saturday (if you have a chance to see them, please do so – they always put on an incredible show, and if you think Andy Bell is an amazing vocalist on record wait until you hear him perform live — he’s spellbinding.) Erasure has enjoyed dozens of hits and a long string of acclaimed albums, and with their upcoming 2-night stand at the 9:30 Club and new album, it seems a good time to look back on their remarkable career and take a look at their 40 Greatest Tracks. Of course there are many other great ones that could have been included, so feel free to list your favorites in the comments section.

This beautiful, intensely personal track bookends the outstanding Wild! album to great effect Wild! is an upbeat collection overflowing with feeling and emotion, but “Piano Song” is the anchor that keeps the whole thing grounded. It’s the peek directly into the songwriter’s soul.

Erasure was on a hot streak in 1988. They released their greatest single album, The Innocents, and then a smokin’ hot EP of 4 outstanding tracks called Crackers International. “The Hardest Part,” featuring Bell singing in his lower register, is the type of song that most bands would release as a single, but Erasure had so many great tracks that it was hidden away as an extra song on an EP.

“Spiralling” is a gorgeous electronic ballad from the duo’s breakthrough 2nd album The Circus, and is an early showcase for Andy Bell’s remarkable voice. It’s also a beautiful arrangements with Vince Clarke’s beautifully layered keyboards sounding deeper and richer than what you might expect to find on a typical synth-pop record.

Vince and Andy recorded so many great songs for their 1989 album Wild! that there just wasn’t room for all of them and a few ended up as b-sides: “Runaround on the Underground,” their electrifying cover of “Supernature,” the kinetic dance track “Sweet Sweet Baby,” and this soulful pop nugget that starts with a keyboard riff straight out of a Motown song before erupting into a joyous groove that makes it impossible to sit still. It also features a lovely layered harmony vocal part during the chorus. “Paradise” is one of the best of Erasure’s many great b-sides.

The opening track and 3rd single from the duo’s outstanding 1997 album Cowboy, “Rain” is a dance anthem with an unforgettable melody. It’s classic Erasure, and a fitting lead-off track to one of their finest and most underrated albums. A mix by Al Stone was chosen for the single release, but the album version is tighter and funkier.

The first single from Erasure’s 2007 album Light at the End of the World, “I Could Fall in Love With You” is a classic dance-floor epic. It rocketed up the U.S. dance chart upon its release, showing Erasure can still command the dance floor. It’s a high energy track with swirling keyboards and a chorus that sticks in your head and won’t let go. A great choice for first single.

“Victim of Love” is a perfect pop single; Bell’s soulful vocals shine, the melody is catchy and memorable, and the track has an insistent rhythm buoyed (like their breakthrough single, “Sometimes”) by a strong acoustic guitar part. No surprise “Victim of Love” became the duo’s third straight Top 20 hit from their second album The Circus.

The lush electronic opener to the duo’s 1994 album I Say, I Say, I Say is all wooshes of synths wrapped around one of Andy Bell’s loveliest melodies and vocals.“Take Me Back is” layers of sound to crawl inside and feel protected from the world. One of Erasure’s finest sonic achievements.

Opening with pulsing keyboards and Andy Bell singing beautifully in his lower register, “You Surround Me” is one of the duo’s all-time great ballads. It has real heart and feeling; it’s unabashedly sentimental, but it feels completely genuine. “You Surround Me” is yet another great single from the Wild! album.

The opening track on Light at the End of the World is one of the best moments on the album. It’s a classic Erasure dance-floor stomper with a killer melody during the chorus. Inexplicably “Sunday Girl” only charted at #33 on the UK singles chart; it deserved a much better fate.