“My mother’s greatest joy in life was to make people laugh. Although that is difficult to do right now, I know her final wish would be that we return to laughing soon.” 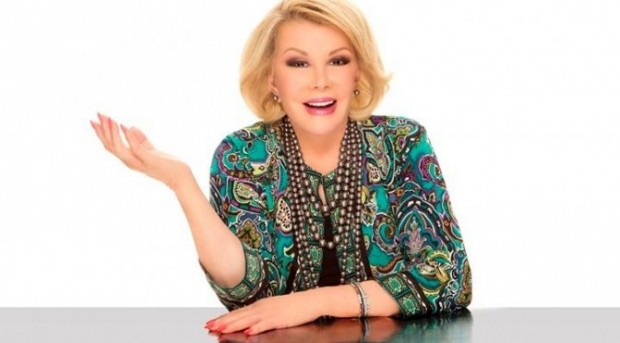 —Melissa Rivers, in a statement.

Joan Rivers, legendary comic, TV host, actress, author, and gay icon, has died at age 81. Rivers stopped breathing during surgery on her vocal chords at a New York City clinic last week and was rushed to Mount Sinai Hospital, where she was placed on life support. Her condition was believed to be improving, with Rivers moved to a private room at the hospital, but her daughter Melissa confirmed Rivers’ death in a statement today.

It is with great sadness that I announce the death of my mother, Joan Rivers. She passed peacefully at 1:17 p.m. surrounded by family and close friends. My son and I would like to thank the doctors, nurses, and staff of Mount Sinai Hospital for the amazing care they provided for my mother.

Cooper and I have found ourselves humbled by the outpouring of love, support, and prayers we have received from around the world. They have been heard and appreciated.

My mother’s greatest joy in life was to make people laugh. Although that is difficult to do right now, I know her final wish would be that we return to laughing soon.

Joan Rivers broke down numerous barriers for female comics, making a name for herself on the New York City stand-up circuit. She remains the only woman to ever host her own talk show on network late night television, following three years as the only permanent guest host of The Tonight Show Starring Johnny Carson. More recently, Rivers is known to many for her years working the red carpets of Hollywood, where she coined the infamous phrase “Who are you wearing?”, and for her career resurgence in the late ’00s on reality TV and as host of E!’s Fashion Police.

It’s her stand-up for which Rivers’ was perhaps best known, however, with her brash, unfiltered style winning her legions of fans — particularly in the LGBT community. “My gay fans have been wonderful from day one,” Rivers told The Advocate. “At the beginning of my career [the] only ones who would laugh at my jokes were the gay guys.”