Olney’s “Colossal” is a moving drama about a gay footballer 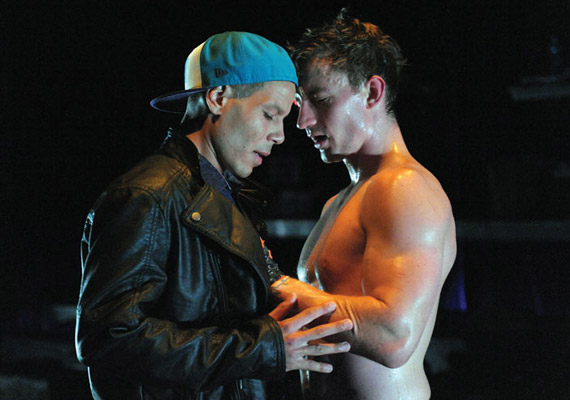 Colossal is not your typical stage play. “It is full-tackle football,” director Will Davis says. “We spent time teaching them how to hit each other, and how to fall.” Indeed, Andrew Hinderacker’s drama, now running at Olney Theatre, is structured similarly to a football game, with a pre-show training session and a half-time show, and four 15-minute quarters of action — and all on a stage setup like a gridiron.

If it sounds exhausting, actor Michael Patrick Thornton confirms that it is — and not just physically. “I think everyone is pushing themselves to their physical and emotional and mental limits with the show,” says Thornton, one of two actors playing Mike, a star football player in love with one of his teammates. The play is timely for touching on this gay angle, but also for tackling the subject of devastating injuries caused by the game. In Colossal, Mike’s world is shattered after he takes a hit that leaves him paralyzed from the waist down, and the play mostly focuses on his recovery.

Thornton, who you may recognize from the ABC Grey’s Anatomy-spinoff Private Practice, plays the post-injury Mike. Thornton suffered a spinal stroke a decade ago and has a similar sense of mobility as the wheelchair-bound Mike. “The character in Colossal never goes for a stroll in a walker, which is something I did yesterday,” Thornton says, “but it’s pretty much the same.” A member of the same theater company in Chicago as playwright Hinderacker, Thornton has been working on the play since it was developed in a workshop production at the Kennedy Center two years ago. Director Davis has also been working to help develop the piece for years.

“I like physically adventurous plays,” says Davis, a New York-based transgender artist who’s also a dancer. Davis worked on Olney’s production of Colossal with choreographers Christopher D’Amboise, formerly of the New York City Ballet, and Ben Kunis of Synetic Theater, who he hopes to work with again.

“Colossal is really a phenomenal piece,” Davis says, “because it’s very much about the different ways that the body moves through space, and how tragedy or love affects and changes the literal locomotion.”