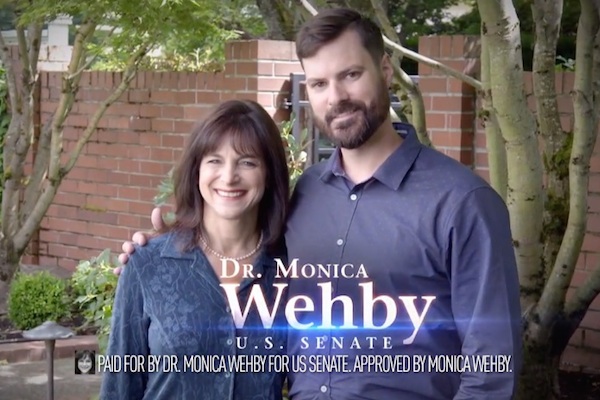 A debate over LGBT-rights erupted between the Republican and Democratic candidates in Oregon’s U.S. Senate race this week. But unlike nearly every other Senate race in the country, the divide isn’t over one candidate’s support for LGBT equality versus one’s opposition — but who is more pro-gay.

In a television ad released Tuesday, Ben West, one of the plaintiffs who sued Oregon over the state’s same-sex marriage ban, endorsed Wehby over her Democratic opponent, Sen. Jeff Merkley.

“Marrying my husband was the happiest day of my life; I was proud of Oregon and our country,” West says in an ad featuring images of him and his husband, Paul Rummell. “But there’s a lot of work left to do. Whether it’s standing up for equality, for the unemployed, or for the next generation, we need leaders who have the courage to do what’s right. That’s why I support Monica Wehby for Senate; I know she’ll fight for every Oregon family, including mine.”

The ad concludes with West and Wehby smiling into the camera with their arms wrapped around each other. The ad immediately garnered national attention, illustrating the divided state of the Republican Party over same-sex marriage and LGBT issues.

According to The Oregonian, the ad represents Wehby’s “most visible effort to argue that she can be independent from Republican Party orthodoxy” in a state where all statewide offices and both houses of the Legislature are controlled by Democrats.

The audacity of the ad appeared to inflame not only the Merkley campaign, but the Oregon Democratic Party. In a statement, Merkley campaign spokeswoman Lindsey O’Brien said the senator welcomed her support for marriage equality but labeled the ad an attempt at distraction.

“As a long-time advocate for equality and opportunity for our LGBT community, Jeff welcomes Monica Wehby’s election-eve change of heart in support of marriage equality. But this new position won’t distract Oregonians from the anti-middle class agenda Wehby shares with the oil billionaire Koch brothers and national Republicans,” O’Brien said. “The Wehby/Koch agenda would gut the Clean Air Act, give big tax breaks to millionaires and make it cheaper and easier to ship jobs overseas, and couldn’t be more damaging to Oregon’s families.”

In a separate statement, the Oregon Democratic Party also shot back with a statement signed by the other six plaintiffs in the federal lawsuit that led a federal judge to overturn the state’s same-sex marriage ban in May.

We were happy to see Monica Wehby’s advertisement; we only wish Wehby had joined our efforts under less politically motivated circumstances. How is our community expected to trust Monica Wehby when she’s taken so many different positions on marriage equality since the start of her campaign?

Real courage would have been for Wehby to take this stance during her primary, or to support our efforts to overturn Measure 36 and end discrimination in Oregon’s constitution when our case was before the federal court, but Wehby refused to support us.

We’re with Jeff Merkley because he has fought for our rights and our freedom to marry for a long time, not just in an election year. He’s been a champion for our community, and he has our full support in his race against Monica Wehby.

”Despite her election-eve conversion, Monica Wehby was nowhere to be found when we were fighting to end marriage discrimination in Oregon,” Frazzini said in a statement. ”Wehby’s states’ rights approach would jeopardize basic civil rights for LGBT Americans. She believes states should have the right to discriminate against people based on who they are and whom they love. It’s clear Monica Wehby can’t be trusted in the fight for equal rights.”

The Oregon Democratic Party accumulated a list of quotations from Wehby arguing same-sex marriage is a state issue and that she would “support whatever the people of Oregon support” when the issue was set to appear on the November ballot before the federal court decision.

“I’m proud and humbled to have the endorsement of Ben and Paul,” Wehby said in a statement accompanying the ad. “Their courage to stand up for their family, and against inequality is inspiring and embodies the spirit I will serve with as Oregon’s next Senator. My commitment to the families of Oregon begins with providing more jobs, a stronger economy, and better education for families like Ben and Paul’s, who think our current path is the wrong one.”

According to The Oregonian, the couple was aggressively courted by Wehby’s aides after emailing the campaign. Should Wehby defeat Merkley, she would become the fifth Senate Republican to openly support same-sex marriage. Sens. Rob Portman (Ohio), Mark Kirk (Ill.), Lisa Murkowski (Alaska) and Susan Collins (Maine) have all voiced support for marriage equality.

It certainly won’t be easy for Wehby to paint herself as the pro-LGBT candidate in her race against Merkley. Merkley was elected to the Senate in 2008 after serving as Speaker of the Oregon House of Representatives, where he helped pass a law prohibiting discrimination in employment, housing and public accommodations based on sexual orientation and gender identity. When he came to the U.S. Senate, Merkley assumed the role of Sen. Ted Kennedy (D-Mass.) as the champion of the Employment Non-Discrimination Act (ENDA) in the upper chamber, which approved ENDA 64-32 in November after the bill failed by one vote in 1996.

Merkley also has the endorsement of the Human Rights Campaign, as well as LGBT-rights groups in Oregon. Nevertheless, in a blog post published yesterday, HRC national press secretary Charlie Joughin wrote that the GOP should take note of Wehby’s move.

“The Republican leadership, including the GOP Platform Committee should take a good hard look at not just this ad, but more so at the undeniable sea change taking place across the country on the issue of marriage,” Joughin wrote. “It’s no secret that support for marriage equality among Republicans – especially younger voters – has enjoyed the same meteoric rise as it has with the rest of the American population.”

Despite that praise, Joughin insisted Merkley deserves reelection, writing, “Voters in Oregon have a clear choice in this race. Jeff Merkley has a proven record of leading the fight for full equality for LGBT Oregonians and all LGBT Americans.”