By Doug Rule on September 12, 2014 @https://twitter.com/ruleonwriting 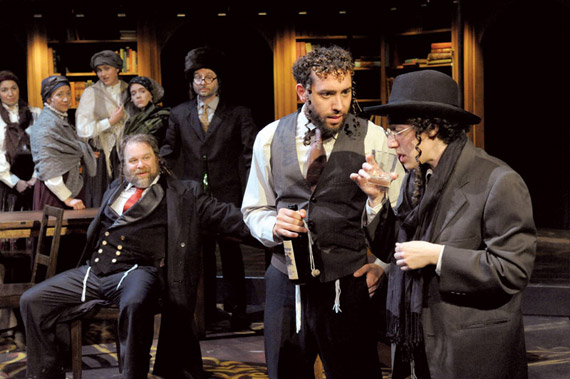 The actress utters those lyrics only after Act Two is well underway in the musical adaptation of Yentl — after an overlong 90-minute first act and a 15-minute intermission. What took so long for this much-needed exercise in self-incrimination from the title character?

By this point in the story, Yentl has long ago abandoned the community where she grew up, having transplanted herself to another village far away, a place where everyone has come to know her as a boy named Anshel, a disguise that allows for studying the Talmud, since only males can be Talmud scholars. In short, when Anshel falls for the boy of “his” dreams, Avigdor (Michael Kevin Darnall), Anshel simply doesn’t have the balls to tell him the truth. And when the town’s most available bachelorette Hadass (Sara Dabney Tisdale) falls for Anshel, “he” doesn’t have the heart to deny her marriage. It’s not until after the wedding night that Anshel questions his actions — at least that’s the first time he expresses it in full musical form. And this only adds to the difficulty for a theatergoer to sympathize, much less relate, to a character whose original intentions of becoming a wholly devoted religious scholar were so pure and pious.

Certainly it’s a saving grace to have a song like “Oh Shit” to provide entertaining relief and make us wonder anew how Yentl might try to resolve the mess she’s made. Singer-songwriter Jill Sobule, with assistance from Robin Eaton, has written 11 klezmer-colored pop songs for this version of Yentl, and they’re as charmingly provocative as Sobule’s big ’90s pop hit “I Kissed A Girl.” Her music and lyrics, calling to mind rock musicals such as Spring Awakening, might not be as timeless or traditional as the songs in the 1983 Barbra Streisand-helmed movie version of Isaac Bashevis Singer’s original short story. But as satisfying as it might have been to hear Bass sing “Papa Can You Hear Me?,” timeless and traditional music is the last thing Yentl needs. The show needs punchy music to match the punch of the story about a girl who gives up everything to pursue her dream — only to besmirch her own plans by pursuing love and happiness. It’s all a bit desultory really, so breaks in the tale for some bright and lively music are welcome.

Most of the 14-member cast in this tricky Theater J production, directed by Shirley Serotsky, plays at least two characters, and several also double as musicians. All do a fine job when breaking into song and dance, but are on less sturdy ground when speaking. At a recent performance most of the leads stumbled over their lines at least once. And as effective and convincing as Bass is in conveying as both male and female, you just don’t get the sense there’s real sexual attraction to Hadass, nor do you sense a real conflict over gender. Instead, the conflict is one of culture. If Bass’s Yentl could live life as a female rabbi, there wouldn’t be any such character named Anshel, period.

IF IT’S HARD TO SYMPATHIZE WITH YENTL, it’s even harder to feel for Abby and Zack, the two lead characters in Amy Herzog’s Belleville. Studio Theatre’s David Muse directs an intermission-less production of this nearly 100-minute play, which develops so slowly that it’s not until the last 20 minutes or so that you get a sense of how it might end — and from there it moves at breakneck speed, with surprising, dramatic plot twists. It just might stir you into such a frenzy your heart is pounding at the play’s bloody end — and the only relief is to flee to the exit and headed to the nearest bar as fast as you can.

Belleville is tautly acted by a cast of four, led by Gillian Williams as Abby and Jacob H. Knoll as Zack, a seemingly happy American couple who move to Paris for his work and her pleasure — or so the story starts. Everything spins out from there, with the couple’s modern one-bedroom apartment (gorgeously realized by Debra Booth) the center of it all, comfortable until it becomes claustrophobic, and much worse.

Herzog is remarkably skillful in the way she slowly, shockingly unravels what we think we know about her characters. The problem is that she picks away until there were few to no redeeming qualities left. I quickly lost interest, to the point I didn’t much care how it ended, just that it finally did. 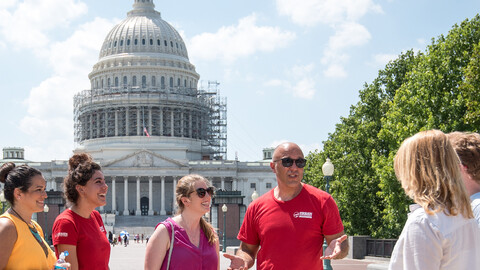 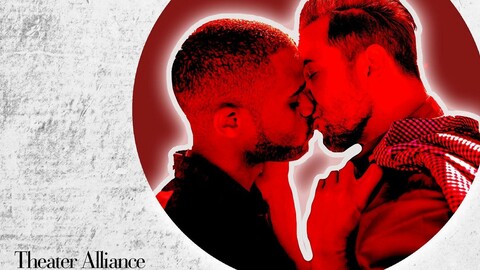 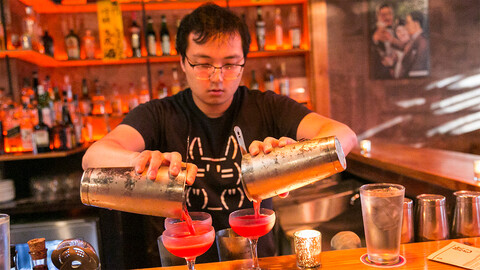 If there's one thing you'll immediately learn about the hardworking citizens of Washington, D.C., it's that they love a good happy hour! Urban Adventures helps you sip your way through the Capitol's v... Read more 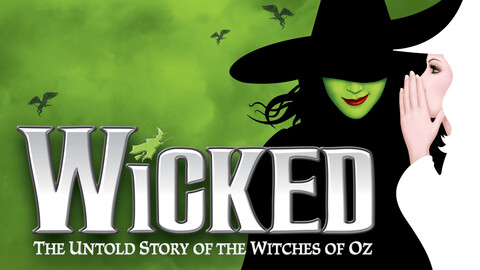 A true Broadway sensation, "Wicked" looks at what happened in the Land of Oz from a very different perspective. Long before Dorothy arrives, another girl is born with emerald-green skin. She's smart, ... Read more 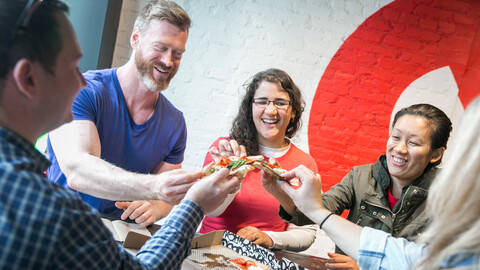 Discover D.C. On a Walking Foodie Tour of H Street

Not only does H Street have rich, cultural history, but it's also blossomed into one of the most diverse culinary scenes of the Capitol. Grab a little mix of everything, from Italian to Middle Eastern... Read more 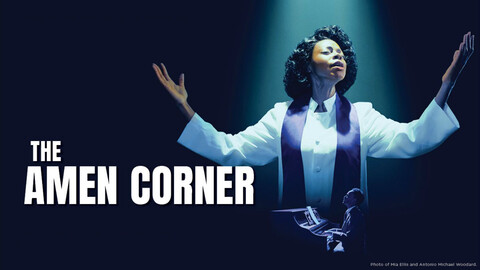 In a 1950s storefront church in Harlem, Pastor Margaret Alexander rails at her congregation and her teenaged son for their vices. With a gospel choir singing of redemption in one room and her son bond... Read more 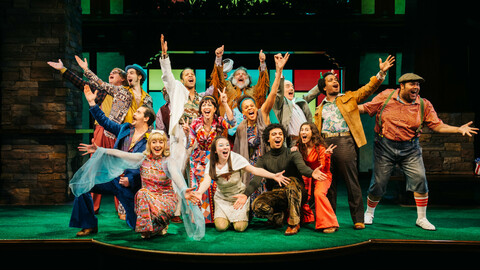 "The Merry Wives of Windsor"

Let's say you're a happily married woman and a skeezy loudmouth starts making inappropriate, unwanted advances -- how would you respond? If your answer wasn't, "Spin an elaborate web of lies so the gu... Read more 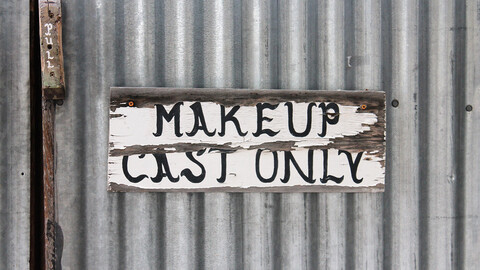 What else could go wrong? Tensions run high as Lloyd Dallas, the director of this play’s play-within-a-play, struggles to prepare his accident-prone cast for the opening of British bedroom comedy "N... Read more 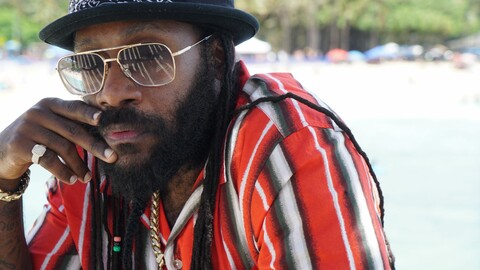 Riley is the son of veteran singer Jimmy Riley and nurse Lavern Tatham-Riley. He was born in the Bronx and grew up in South Florida. He began his musical career as a deejay working with Busta Rhymes, ... Read more 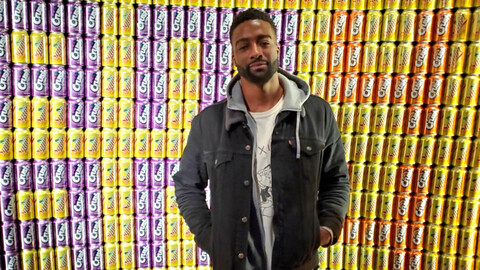 If you like the internet, you are going to like this show! "The Free Wifi Comedy Show" is bringing together some of the Washington, D.C. area's best and brightest comics and blending them together for... Read more 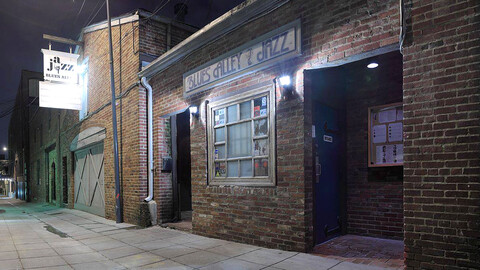 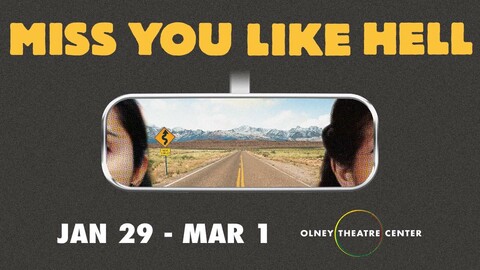 "Miss You Like Hell": A Musical for Our Times

She’s worked with Lin-Manuel Miranda, writing the book for the game-changing "In the Heights", and with this — her latest work — Quiara Alegria Hudes reaches all-new heights. With one finger on ... Read more 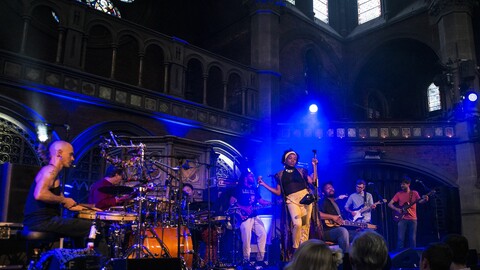 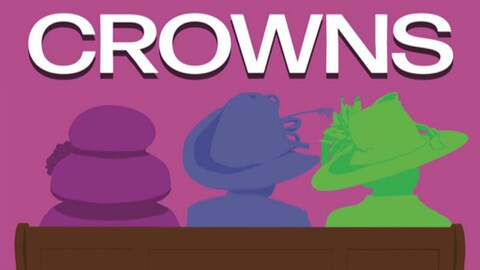 "Crowns" is an inspiring musical about love, family, redemption and joy. When a Brooklyn teen goes to live with her grandmother in South Carolina after the death of her brother, she learns the beauty,... Read more 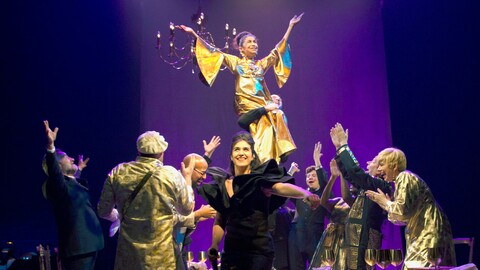 Artistic Director Simon Godwin makes his directorial debut at the Shakespeare Theatre Company with a re-staging of his recent, acclaimed production of "Timon of Athens", featuring Olivier Award-winner... Read more 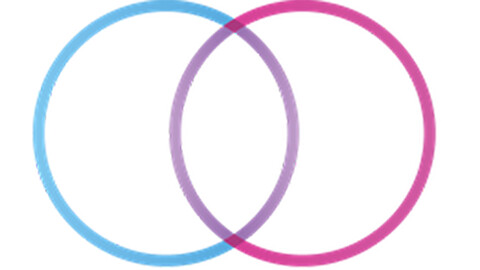 Since 2013, "Speechless" has been selling out shows at comedy clubs and conferences all over the country and the world. Armed only with a laser pointer and a deck of random slides, presenters ranging ... Read more

Don´t miss this "exquisite opportunity" to see Nilo Cruz direct his own work! Cruz’s latest play explores matters of the heart — love lost and the need to experience it once more. But to find it ... Read more 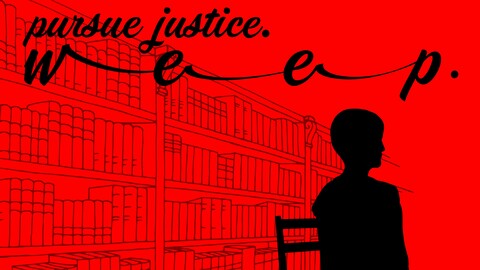 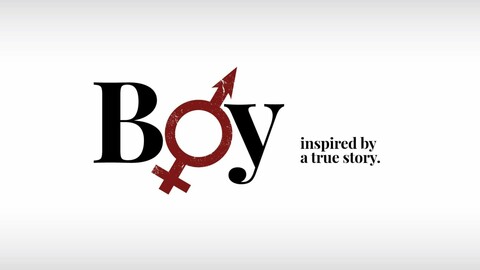 Imagine being the parents of a male infant whose genitals are damaged in a circumcision accident. You consult an expert in the nascent field of gender identity, and are advised to raise your son as a ... Read more 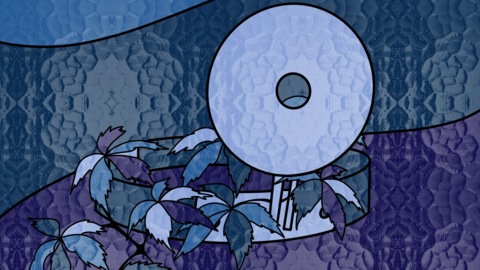 Doug Rule covers the arts, theater, music, food, nightlife and culture as contributing editor for Metro Weekly.
← Previous Story Points of View: “Sunday in the Park with George” (Review)
Next Story → Olney’s “Colossal” is a moving drama about a gay footballer