By John Riley on September 1, 2014 @JohnAndresRiley 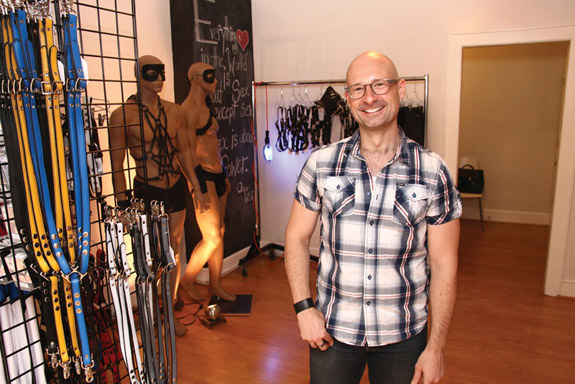 It’s only 700 square feet of space on the top floor of a second-floor walk-up in D.C.’s Woodridge neighborhood, but to Dan Snyder, Jr., it’s a dream come true.

Snyder, the owner of TrickBox, a newly-opened “fetish-gear” store focusing on novelty items ranging from wrestling singlets to BSDM gear, previously worked as a hairstylist in Northern Virginia for 18 years before leaving to open a shop focused on selling sports gear, jockstraps, and various other items for adult play.

“I’m a fan of fetish gear, and I felt like D.C. certainly had a community that warranted having something here in town,” Snyder says. “Folks could come out and check out stuff, and actually see it, try it on, and, so far, it’s worked out. There’s a need for it. We’re tired of ordering things online or having to wait for a major event like MAL to come to town so we can do our shopping.”

Snyder, who lives in the nearby Brookland neighborhood with his husband, Rory Austin, had been saving up for about 10 years before making the decision to finally purchase his store earlier this year.

“It has just been a dream for some time, and my husband encouraged me to go for it,” Snyder says. “Prior to his doing so, I just treated it more as a wish. That’s when I thought, ‘Yes, why not?'”

Initially, Snyder had hoped to open a store in the city’s H Street NE corridor, but every place he found was either too large or too expensive, bringing him well over his planned budget. With the help of a real estate agent, Snyder began looking at other up-and-coming areas where space might be cheaper, including the Georgia Avenue corridor in the city’s Petworth neighborhood. Then, one day, he ran across a two-block long commercial strip near the 2300 block of Rhode Island Avenue NE.

“I happened to be rolling by this strip here,” says Snyder. “I found a number, called, came and checked it out. It was the perfect size. I was shooting for something that was under 1000 square feet. I wanted it in an area where it was convenient for folks coming into town to see us, and also, just something I could afford. This met all of the requirements.”

With the help of Friends of Rhode Island Avenue, a local chamber focusing on the revitalization of traditional business districts, the couple was able to secure a small business grant through the Hispanic Chamber of Commerce. The money from that grant pays the cost of a consultant, who is working with Snyder to develop a marketing plan for the store.

Because TrickBox opened with little fanfare, Snyder hopes to have a “grand opening” event, possibly partnering with some of the local leather or fetish clubs and organizations to help display his business’s wares. For now, Snyder is relying largely on social media, as well as word-of-mouth referrals from former customers, to garner publicity for his business, but is talking with local leather, fetish, and BDSM organizations about holding alternative lifestyle parties or other events. Snyder also plans to launch a line of neoprene and rubber items, and hopes to hire additional staff and expand the store’s hours and days of operation.

“We don’t want to get fixed on any one thing,” Snyder says of his store’s offerings. “We want to take more of a boutique approach, where we can really turn things over, bring in some new stuff, keep it fun.”

John Riley is the local news reporter for Metro Weekly. He can be reached at jriley@metroweekly.com
← Previous Story NGLCC’s Las Vegas Gathering
Next Story → Taking Account of Details