Following talks with university officials, cancelled "Milk and Cookies" event is back on

By John Riley on October 24, 2014 @JohnAndresRiley 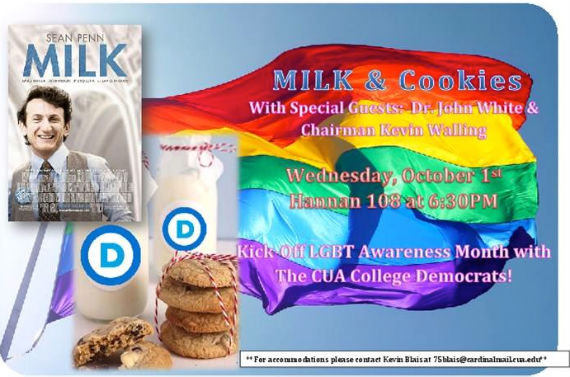 Screenshot of the original CUA flier as it appeared on the CUA Democrats’ Facebook page. Photo credit: Catholic University of America College Democrats.

The Catholic University of America (CUA) College Democrats are in the process of rescheduling a cancelled “Milk and Cookies” event after university administrators pulled the plug on it over concerns that the event would devolve into “advocacy” of homosexuality, in conflict with Catholic Church teachings.

University administrators had originally objected to the promotion of the event, both in fliers and on social media, as a “kick off” to LGBT Awareness Month, which the university does not recognize. They also objected to the size of a rainbow flag that officials thought was too large and too prominent.

As part of the event, students had been slated to hear from John White, a professor of politics at CUA, and Kevin Walling, a CUA alumnus and the openly gay chair of the Montgomery County Democratic Central Committee (MCDCC), about the effect of the gay rights movement on the Democratic Party, which has largely embraced LGBT voters. The talk, which was academic in nature and not advocating for any change in Catholic doctrine, was to be followed by a screening of the film Milk, a biopic about Harvey Milk, the ’70s era openly gay San Francisco politician and prominent LGBT rights advocate. CUA Democrats had held a similar event in 2011, under a different administration, with little outcry or controversy.

At the time the event was cancelled, Victor Nakas, the associate vice president for public affairs at the university, had emailed a statement to reporters asking about the cancellation outlining the university’s concerns, namely that the way in which the club had advertised the event “called into question whether the event had changed in nature from one of education to one of advocacy.”

“Following a discussion and review of the program’s educational intent, the Director of Campus Activities approved the rescheduling of the event,” Nakas said in the statement.

Jackson Tovar, the communications director of CUA College Democrats, released a similar statement confirming that the university had re-approved the event and saying that the club is still in the process of finding another date for the event, hopefully within the next month, if not by the end of October.

“I am very pleased with the outcome of the meeting,” Kestler said in a statement following her meeting with the director of campus activities. “The miscommunication was resolve, and the event will take place in its original format.”

This is not the first time that CUA has attempted to stifle discussion or recognition of LGBT rights. The university previously rejected a 2012 proposal to allow official recognition of CUAllies, an unsanctioned student organization for LGBT students and supporters, despite the support of 20 of 23 members of CUA’s Student Association, as well as heads of other on-campus clubs and organizations. The university’s stated opposition to recognizing the club was its worry that the club would turn into an “advocacy organization” for LGBT causes. CUA had previously had an officially recognized on-campus LGBT organization from 1998 to 2002, without incident. In contrast, the District’s other major Catholic university, Georgetown University, has both an officially recognized LGBT organization, GU Pride, and an LGBTQ Resource Center on campus that opened in 2008.