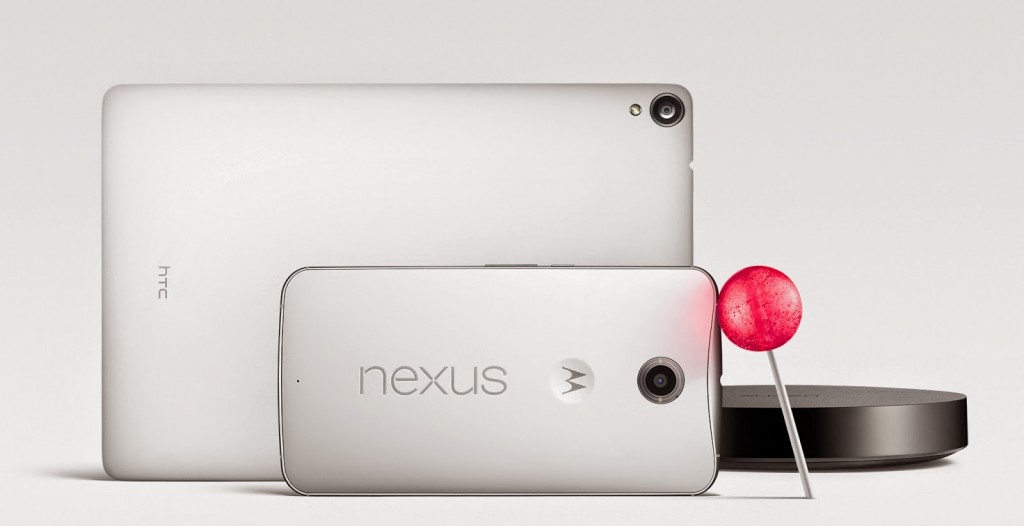 Google’s Nexus program has evolved over several years into something rather phenomenal. Offered through Google’s own Play Store, these devices, specifically built by a number of manufacturers for Google, came with the latest and greatest hardware inside and the freshest, cleanest version of Google’s Android software. The cherry on top of this sweet deal? The prices were dramatically lower than their rivals.

Nowhere was this better exemplified than last year’s Nexus 5 smartphone. Here was a device that could rival the iPhones and Galaxys of the smartphone world, but at a price of just $350. That’s off contract, carrier unlocked. Google sold out, repeatedly, as Android fans, bargain hunters and those unwilling to sell their souls to a carrier for two years jumped on this powerful, fast, flagship device. Not interested in a smartphone? Google’s Nexus 7 tablet is still the benchmark for what a budget tablet should be. Again, great hardware and raw Android software was matched with a price starting at just $200.

In a world where Apple asks for your first-born child and your choice of limb in order to buy a device, the Nexus family was something to look toward, bringing flagship devices within reach of those who couldn’t or wouldn’t spend silly money on other high-end devices. Sadly, with today’s announcement of the Nexus 6 smartphone and Nexus 9 tablet, that’s no more. Here, incredible specs are matched with significantly increased pricetags — although, as you’ll see, that’s not necessarily a bad thing.

Let’s start with what will likely be the biggest seller, the Nexus 6. Whereas prior Nexus phones were crafted by HTC, Samsung and LG, this time Google turned to the company it briefly owned, Motorola. Taking the design language found in its Moto X smartphone, Motorola came back with the Nexus 6, and it’s a beautiful piece of gadgetry. Framed in aluminum, with a polycarbonate back and glass front, the 6 offers an attractive, premium look that was missing from the plain, simple Nexus 5. There’s no ostentatious detailing or faux-leather backings here, just two understated logos and Motorola’s subdued smartphone design that should be comfortable to hold, sturdy and look attractive sitting next to its smartphone contemporaries. 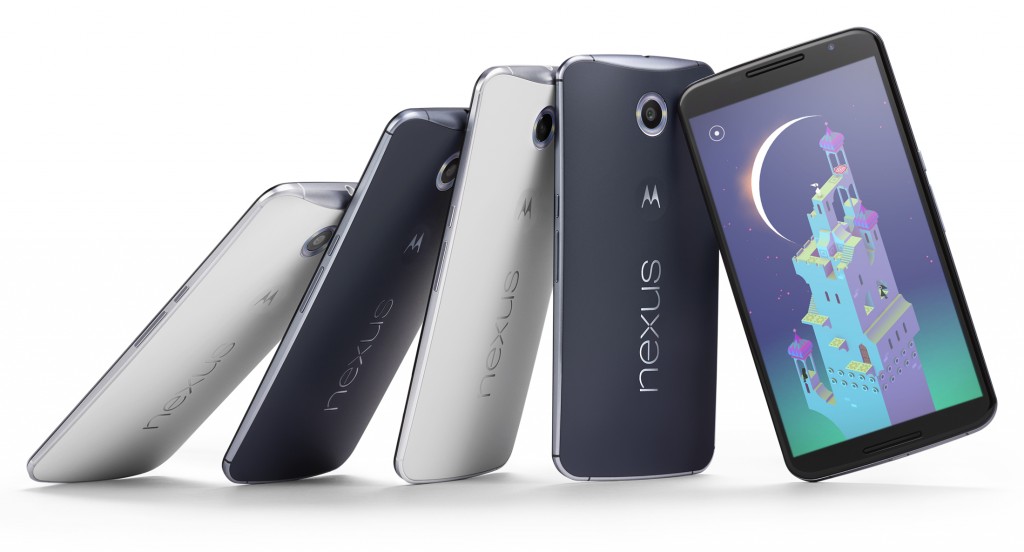 However, it’s when you look at the 6’s spec sheet that things really start to look good. Google and Motorola have worked together to build what may be one of the most powerful Android devices available. That 6 corresponds with the 6-inch display, lying underneath tough Gorilla Glass 3 (it’s technically 5.96-inches, but we’re willing to forgive that technicality). Apple may have been pretty proud of finally giving the iPhone a Full HD display with the 6 Plus, but that was so last year with the Nexus 5. This time around, Moto bumped the resolution up to Quad HD, or 2560 x 1440, good for a pixel-per-inch ratio of 493 — much better than any Retina display.

Images taken on the device should look pretty great on that screen, with a 13MP, optically stabilized camera featuring a dual LED ring flash, f/2.0 aperture, and up to 4K at 30 fps video capture. For selfie addicts, there’s a 2MP camera above the screen. Videos and games should look great on the AMOLED display, and there won’t be any trouble playing them, as the Nexus 6 is hardly wanting for power. Under the 0.39-inch thick frame, Qualcomm’s freshest chip finds its home. That means a quad core, 2.7GHz Snapdragon 805 SOC, mated to an Adreno 420 GPU. The Nexus 6 should easily power Android 5.0 Lollipop, but we’ll get to that later on.

Storage is rated at 32GB or 64GB, while the 3,220mAh battery is rated at around 10 hours of internet use, 24 hours of talk time and video playback of 10 hours. Standby time? Your Nexus 6 should last for over ten days with Ambient Display turned on. Unfortunately, these specs come at a cost. A big one. The Nexus 6 almost doubles the price of the Nexus 5, coming in at $649 unlocked. That’s a hefty sum to pay, but it compares well with competitors. LG’s G3 launched at $699 off contract — though it can now be found for around $580 — while the soon-t0-launch Samsung Galaxy Note 4, which shares many of the same specs as the Nexus 6, is available for an eye-watering $825 unlocked from AT&T, while the iPhone 6 Plus retails at $749 with just 16GB of storage. Pre-orders start October 29, and you’ll want to get in quick if you’re interested, as even at this price the Nexus 6 is bound to sell out. The Nexus 6 will be coming to every major network, with AT&T, Sprint, T-Mobile, Verizon and US Cellular all getting the 6 eventually.

If the Nexus 6 has doubled the price of the Nexus 5, what, then, will Google’s latest tablet cost? Well, consider this: the Nexus 9 will be made by HTC — the first tablet the company has made since the lacklustre Flyer in 2011 — a company currently on the top of its hardware game if the beautifully premium, all aluminum One M8 is anything to go by. As such, the tablet comes with brushed aluminum sides, a polycarbonate back — much like the Nexus 6 — is available in three colors and measures just 0.31-inches across its slender waist. 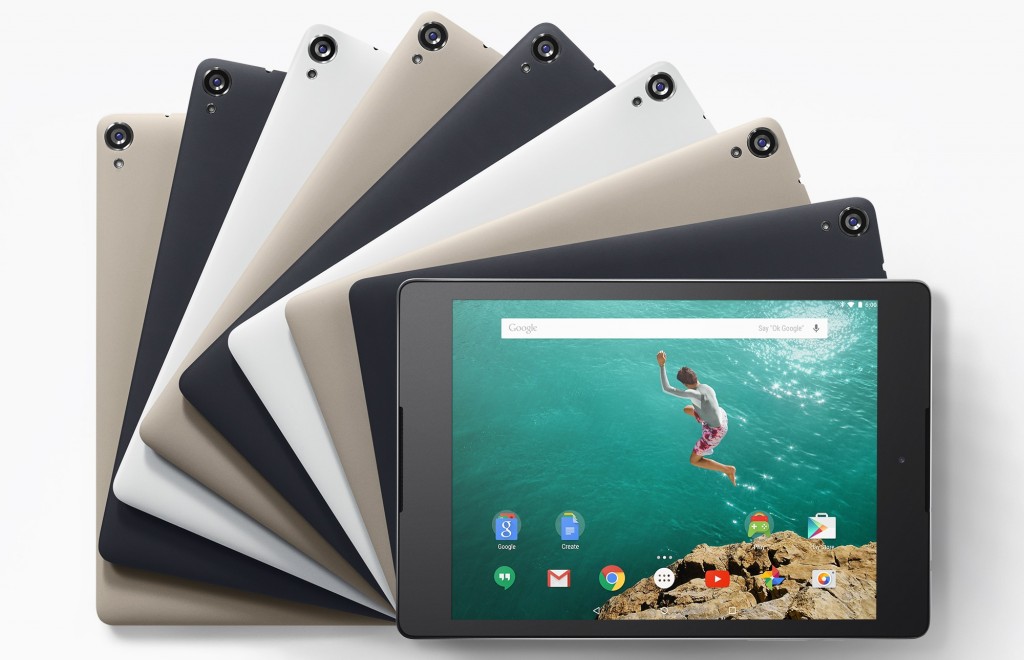 Squeezed into that frame? A 2048 x 1536, 8.9-inch IPS LCD display coated in Gorilla Glass 3. If that sounds vaguely familiar, it’s because the Nexus 9 shares exactly the same resolution as the iPad mini and iPad Air with their Retina displays. Powering the Nexus 9 is NVIDIA’s latest processor, the Tegra K1, the company’s first 64-bit CPU, which is mated to a Kepler GPU. So, the 9 will be fairly powerful, then. There’s 2GB of RAM mated to that CPU, while storage is either 16 or 32GB. A 6,700mAh battery offers over 9 hours of internet, over 9 hours of video and a
standby time of up to 30 days. HTC has added an 8MP camera to the rear and a 1.6MP sensor to the front — though, really, if you’re the sort who takes photos and videos with your tablet you need to re-evaluate your life choices. Music and video fans will appreciate HTC’s excellent BoomSound stereo speakers, which frame the display, while the Nexus 9 runs the freshest version of Android, 5.0 Lollipop.

With the Nexus 7 costing $199 and the now-defunct Nexus 10 costing $399, what price will Google ask for the Nexus 9? Well, with specs this good, it was never going to be cheap. It’ll start at $399 for WiFi-only with 16GB of storage. That price will rise for more storage or LTE connectivity. If you’re the sort who likes to use your tablet for more than just watching YouTube or playing games, HTC and Google has worked on a keyboard case that snaps magnetically to the Nexus 9 to offer a little more productivity for when your laptop just isn’t available. The Nexus 9 will be sold in a myriad of digital and brick-and-mortar stores, with pre-orders starting October 17. Carriers will also sell the device, with T-Mobile announcing a date of November 12.

Google wasn’t done there. On top of a new smartphone and tablet, the company will be offering the Nexus Player, a $99 streaming box in the vein of Roku and Apple TV. The company already offers Chromecast, its dongle for streaming Android apps to your TV, but the Nexus Player will go beyond that, offering Google’s new Android TV platform. What does that mean? All of your favourite streaming services, Android apps and a number of games, running on a version of Android Lollipop for larger screens. There’s a 64-bit Intel chip, 1GB of Ram, 8GB of RAM and Intel promises “console-like graphics” — though that could run the gamut from PlayStation One to Xbox One. There’s WiFi and Bluetooth on board, while Google will also sell you a $39 controller for playing your favorite Android games on the device. Look for pre-orders to start October 17, with general availability beginning November 3.

What, though, of the software powering all of these devices, Android 5.0? The OS formerly known as Android L has now been christened Android Lollipop, continuing Google’s tradition of naming its software releases after desserts and candy. Lollipop is Google’s attempt to unify its software across all devices, from phones, to smartphones, to watches, to tablets, to televisions, and even cars with Android Auto. It brings in a new material design language, which features flatter icons, stylized menus, bolder colors and simpler shapes. There are new animations for opening and closing apps, multitasking and most other actions within the OS. There’s multiple users available, with a guest mode should your friends want to borrow your device — no more Facebook posts or potentially embarrassing photos being looked at. Android Smart Lock allows you to pair your smartphone or tablet with your car or watch, ensuring it can’t be opened without your permission away from those devices. Google has tweaked Android’s power management systems, with a new power saving mode to offer an additional 90 minutes of battery life — enough to make it to your charger if you’re heading home — while Android will now display the time left until your battery runs out, as well as how long your device will take to fully charge. There’s new quick settings, faster performance and support for faster processors and 64-bit CPUs. Lollipop will enable better graphics, improved audio and video and should beef up camera performance, while on supported devices, saying “OK Google,” even with the screen off, will open Google’s voice search function. 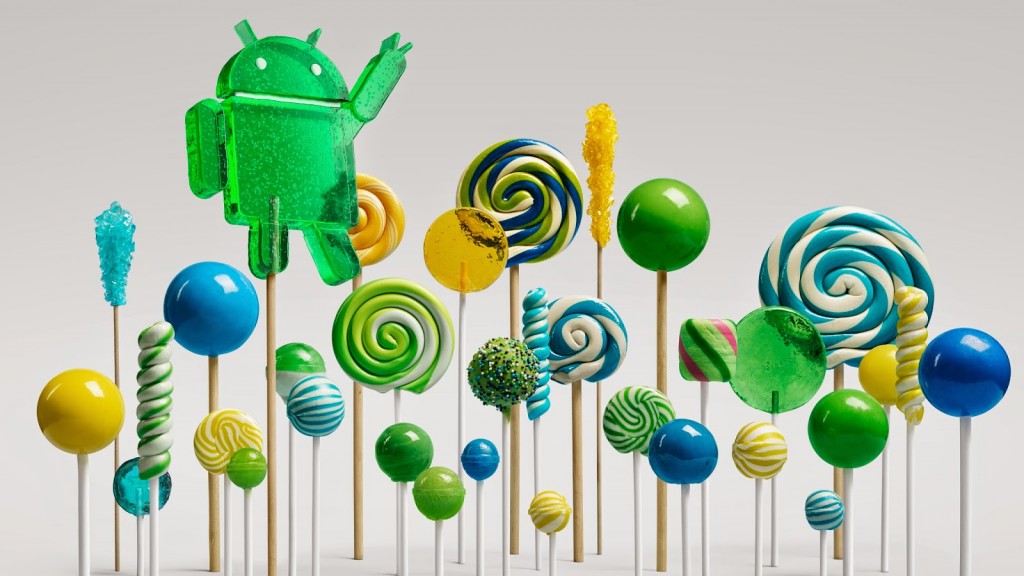 That’s just a small portion of what Android Lollipop brings to the table, and users of the Nexus 5, 7 and 10, as well as those using Google Play edition devices, can expect to receive it in the coming weeks. The Nexus 6 and Nexus 9 will launch with Lollipop, as will the Nexus Player, while Motorola announced that it will also come to the Moto X, G, E, and the Droid Maxx, Mini and Ultra, though no specific date was given. The Android 5.0 SDK will launch October 17. Other Android manufacturers should announce their own updates to devices in the coming weeks and months.

With the Nexus 6 and 9, Google is taking a bold step into previously unexplored territory. Google has thrived on offering top-spec devices at bargain prices, and they’ve sold in huge numbers. Can the maker of Android, the world’s most-used smartphone software, continue that success at a higher price point? Well, with devices this good to look at — and, with Android Lollipop, beautiful to use — they definitely stand a chance, especially when the 6 and 9 compare favorably to similarly specified flagship devices from other manufacturers. Time will tell if consumers are willing to spend flagship money on Nexus-branded devices, but I’d be genuinely surprised if the Nexus 6 and Nexus 9 don’t become successes in their own right.