Peach Pit was the name of the diner, Bailer explains, “where the 30-year-old high school kids on Beverly Hills 90210 used to hang out, and bands would play there.”

No bands play during Bailer’s monthly Peach Pit, but people of all legal-drinking ages sure do. “I love what it has turned into at DC9,” says Bailer. “It’s this kind of sweaty mosh pit of guys and girls, straights and gays, black people and white people, old people and young people — all just dancing and singing at the top of their lungs, every word of every song.” 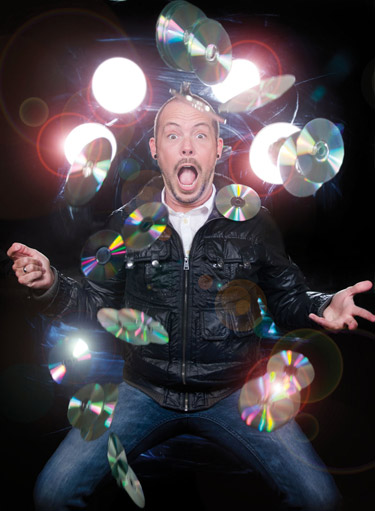 And with few exceptions, you’ve heard — and certainly Bailer has played — all those songs before. These days Bailer may play fewer ’90s pop hits and a few more ’90s underground house hits, provoked by the increasing popularity of thoroughly ’90s-influenced new pop acts such as Disclosure and Kiesza. But he only plays those acts and their new tunes elsewhere, either at the Mixtape party he throws with Shea Van Horn or during his Friday night sets at Nellie’s. “Peach Pit is very strictly ’90s,” he says. He only plays and takes requests for tracks released between Jan. 1, 1990, and Dec. 31, 1999.

With that limitation, Bailer is as surprised as anyone that Peach Pit is still around five years later. “I marvel at the fact that it’s still going as strong as it is,” he says. “It’s not like there is new ’90s music coming out. It’s basically the same batch of songs from month to month.”

Bailer chalks it up to nostalgia for the pop music that sound-tracked a new gay generation’s formative years — and also appealed to an older generation weaned on disco and early house. It’s not only the dance-driven songs and club hits by Madonna, Janet Jackson and Ace of Base that fire up the Peach Pitters, though. Even non-dance jams such as “River of Dreams” by Billy Joel or “Life Is A Highway” by Tom Cochrane can get the joint jumping. “That’s the thing about Peach Pit,” Bailer says, “it’s so nostalgia-y and sing-along-y that even a song like Natalie Imbruglia’s ‘Torn,’ which isn’t a dance song at all, can really get people singing.” Of course the same is true for “Hold On” by Wilson Phillips, which now has additional current cachet, courtesy of Bridesmaids. “People sing every word to it and jump up and down in the air, doing interpretative dance. It’s pretty fucking cool.”

Bailer started the party five years ago this month with Robert Bozick, who has since decamped to Los Angeles, at the Adams Morgan Eritrean restaurant Dahlek, the same breeding ground as Mixtape. But while Mixtape has moved on to fill large, storied venues such as the 9:30 Club and the Howard Theatre, Peach Pit settled at DC9 about four years ago and is now ensconced there. Bailer says the party regularly attracts as many as 800 people throughout a whole night, which is essentially what Mixtape draws when it touches down at the Black Cat.

“Yeah, it’s crowded and sweaty, and some people don’t like that, and I understand that,” he says. “[But it’s] become a kind of unique, literal melting pot — because you’re in there melting with all kinds of people. It just feels really good in there.”