Is it okay to let your dog lap beer? How about blowing pot in your pooch's face?

Birds do it. Bees do it. To quote the immortal words of Cole Porter, even educated fleas do it.

But it’s not just love we’re talking about. All, or at least most, animals apparently also like to get high. “There are certainly instances of animals in nature who get drunk on purpose,” Dr. Buck Drummond of the Dupont Veterinary Clinic says. “Cows will eat rotten fermented apples, it’s been demonstrated, to get drunk. Bears have been seen doing the same thing with rotten fruit.” 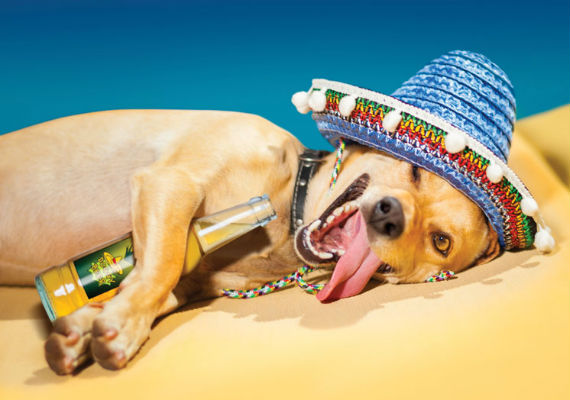 It’s not hard to find lists online documenting cases of wild animals that willingly seek out psychotropic sources, whether these include monkeys munching on millipedes for a hallucinogenic effect or elephants raiding human supplies of alcohol looking for a good buzz.

So, then, it’s only natural to let your dog lap some of your beer, right? And now that D.C. voters have approved the legal use of marijuana, what’s the harm in a little puff-puff-pass with your pooch?

“I’ve absolutely treated dogs in the E.R. for marijuana toxicity,” says Drummond, who spent years as an emergency vet in Southern California. It doesn’t matter how you administer the pot — even merely blowing smoke in a dog’s face can send it over the edge. (And yes, especially with their strong sense of smell, secondhand smoke gets pets high.) “They don’t understand what’s happening to them, so that’s what kind of makes it unfair,” he says. “They don’t always understand why they feel strange, and there can be an element of panic that is neither fun nor funny for animals that are intoxicated.”

In her many years of local practice, Dr. JD Warford of DC MetroVet has treated pets, including young dogs, after their owners gave them alcohol that caused a problem or panic attack. She agrees with Drummond that it’s chiefly an issue of consent. “They can’t really choose or make an educated decision about how much to drink or what might happen,” Dr. Warford says. “They might like the way it tastes, but they can’t make an informed decision about how much to drink or how they might feel later.” That’s especially true if your pet is on any medication or prescription food, or has underlying health issues.

It’s critical to remember that giving your pet anything that will alter his mood or behavior can have risks and consequences. Because of this, Warford argues for erring on the side of caution. “Why take that risk? They can be perfectly happy with their own lives without us having to complicate it.”

Lest you dismiss Warford and Drummond as total pet teetotalers, they’ve both had pet dogs that imbibed alcohol. “If we left a glass of wine somewhere and he could get anywhere near it, he loved it,” Warford says about a French bulldog she and her wife lost to cancer earlier this summer. “I’ve personally had dogs that would seek out alcohol and were shameless about raiding an unattended drink,” Drummond says, while adding, “I’ve also had other dogs who seemed particularly put off by the smell of anything alcoholic.”

Partly, it all boils down to knowing your pet and what they can handle as well as what they like and dislikes. “As a parallel example,” Drummond says, “I’ve had dogs that loved to wear clothes, and dogs that when you dress them up, they’re just clearly miserable… It’s getting to know their preferences.”

But ultimately, as “a final rule of thumb,” Drummond says you should approach your pet as his parent and guardian, not his peer and equal. He looks to you to know what’s in his best interest. After all, you wouldn’t let a child get drunk or high — why should your pet be any different?