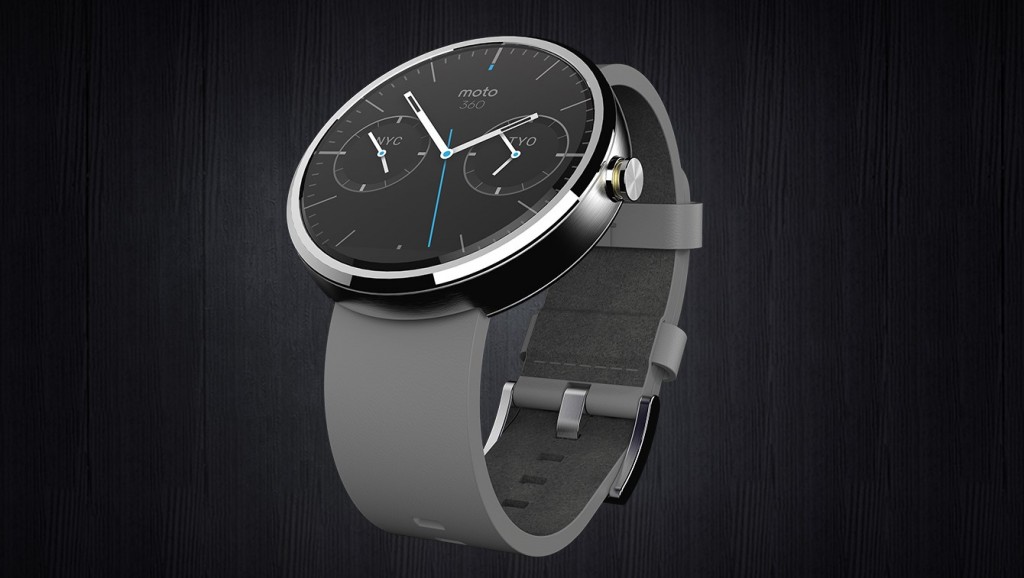 In the world of watches, style is king. Whether it’s rugged, sleek, waterproof or gold-plated, we want whatever adorns our wrist to be a piece of jewellery, a fashion item others can glance at and learn a little more about our personality. Whether it’s Breitling, Jaeger-Le Coultre, Casio, or that Mickey Mouse timepiece you’ve had for years, a watch — really, above all else — should look good on one’s wrist. Oh, and tell the time accurately. That’s also pretty important.

With smartwatches, however, form too often gives way to function. Samsung’s Gear devices are crammed with technology but styled as an afterthought. Pebble’s watches are useful, but they’re hardly sexy. The first raft of Android Wear devices were intended to showcase the software, but neglected the hardware (in my review of LG’s G Watch I described it as being “simply dull”). Even Apple’s Watch, which won’t launch until next year, isn’t the most attractive of devices. Despite what the hordes of Apple faithful will tell you when asked, on the (watch) face of it, it’s an uninspired design.

Of course, there is one smartwatch that does place a big emphasis on style. It was one of three announced when Android Wear launched, it was the one that drew the most intrigue, and the one everyone interested in the platform was eager to get their hands on: Motorola’s Moto 360. Designed and built from the ground up to look like a premium, elegant watch — complete with a traditional, round face — it radiated style and quality from every machined pore, at a price of just $249. It’s no wonder attendees of Google’s I/O conference gave it a standing ovation when they were told they’d be getting one for free. However, can the 360 stand up to its own hype, and deliver a great smartwatch experience where so many others have delivered merely an okay one? Well, the answer to that is a somewhat mixed bag of hardware and software limitations. 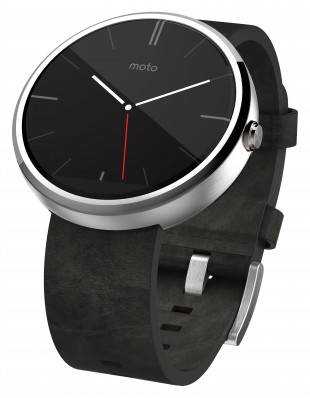 Let’s start with the hardware — and boy, is it a great piece of hardware. Motorola currently offers the 360 in three color choices: light finish, dark finish and champagne, though in layman’s terms, its stainless steel casing is either silver, black or a very subtle gold. Straps are available in leather or metal — though the gold band is restricted to the slimmer, 18 mm style. Metal-strapped 360s retail for $50 more, though add on another $30 to that if you’re buying the champagne model. If you don’t like any of Motorola’s options, straps can be swapped for standard 18-, 22- or 23mm bands. I opted for a light finish 360 with the grey leather band.

When first taking it out of the box, it’s clear that the 360 is different to its Android Wear brethren, and not just because it was the first round watch sporting the software — though it’s now joined by LG’s G Watch R in that category. It looks and feels like something that should cost much more than $249. The silver finish of the casing is cool to the touch and captures the light, the soft-touch Horween leather band creaks like leather should as it wraps around your wrist, the chamfered edges of the Gorilla Glass screen feel exquisite as your finger slides over them. The Moto 360 is a gorgeous piece of technology. Indeed, in the sprint to build the best-looking smartwatch, Motorola has easily outmaneuvered Apple in a race the Cupertino company would have been expected to win.

What about that 1.56-inch LCD display? It too is a sight to behold. Its 320×290 resolution isn’t anything to write home about, but at this size, that still equates to a pixel-per-inch rating of 205. If you’re wondering why the resolution isn’t a perfect 320×320, given the screen is circular, that’s because the 360 has a small strip at the bottom of the display that holds the display drivers and the ambient light sensor. Motorola claims it was necessary to avoid giving the 360 an unsightly bezel, but the tradeoff is a “flat tire” effect when viewing the screen. In day-to-day use, however, you forget it’s there. As for the screen itself, it’s big, bright and colors are nicely balanced. The ambient light sensor allows for auto brightness to be used and — while occasionally slow to detect when moving from bright to dark situations — makes the hassle of manually changing brightness on earlier Wear devices a forgotten annoyance. 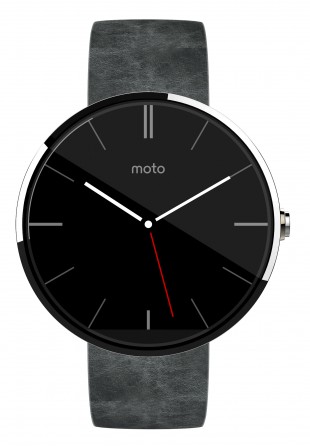 Underneath its polished exterior lies a mixed bag of hardware. There’s 4GB of storage and 512MB of RAM, much like every other Wear device, as well as sensors to detect movement and activity, including a pedometer and heart-rate monitor. The 360 is water resistant for up to 30 minutes in three feet of water, and there’s wireless charging so you won’t have to fiddle with any cables to replenish your watch’s power at night. And, indeed, you’ll have to charge it every night as the 360 has a tiny 320 mAh battery. It’s not helped by the bizarre use of a TI OMAP 3 processor — which is ancient in technology terms, hailing from 2010. Presumably it’s to help the 360’s cost, but it’s hardly the most efficient processor. Indeed, swiping through Android Wear is noticeably less fluid than on the G Watch. Not enough to impact your useage, but it’s apparent in comparison. What’s more, it means that charging every night is a requirement — though you will at least get a full day’s use out of it. I took my 360 off the charger at 8 a.m. and, after a day of notifications, voice dictation and frequently checking the time, returned it to its charging dock at midnight with 27 percent left. Your mileage will vary, but the 360 can at least make it through an entire day — and unless you sleep with your watch on, taking it off and dropping it onto its wireless dock is a simple solution, particularly as the watch can be used as an alarm clock when in its dock.

As for Android Wear, well, there are still limitations. Head here for my full review of the software, but suffice to say that it’s still in its early stages — though, even compared with launch this summer, it’s now infinitely more useful. It still relies heavily on your smartphone for most tasks, but now users can download music to the watch and listen to it with bluetooth headphones — useful if you’re going for a run or bike ride and don’t want your phone in your pocket. As Wear matures, more apps are being updated to use it. Indeed, most of the apps I use every day have some kind of functionality, whether it’s swiping to a second screen or offering interaction with notifications. 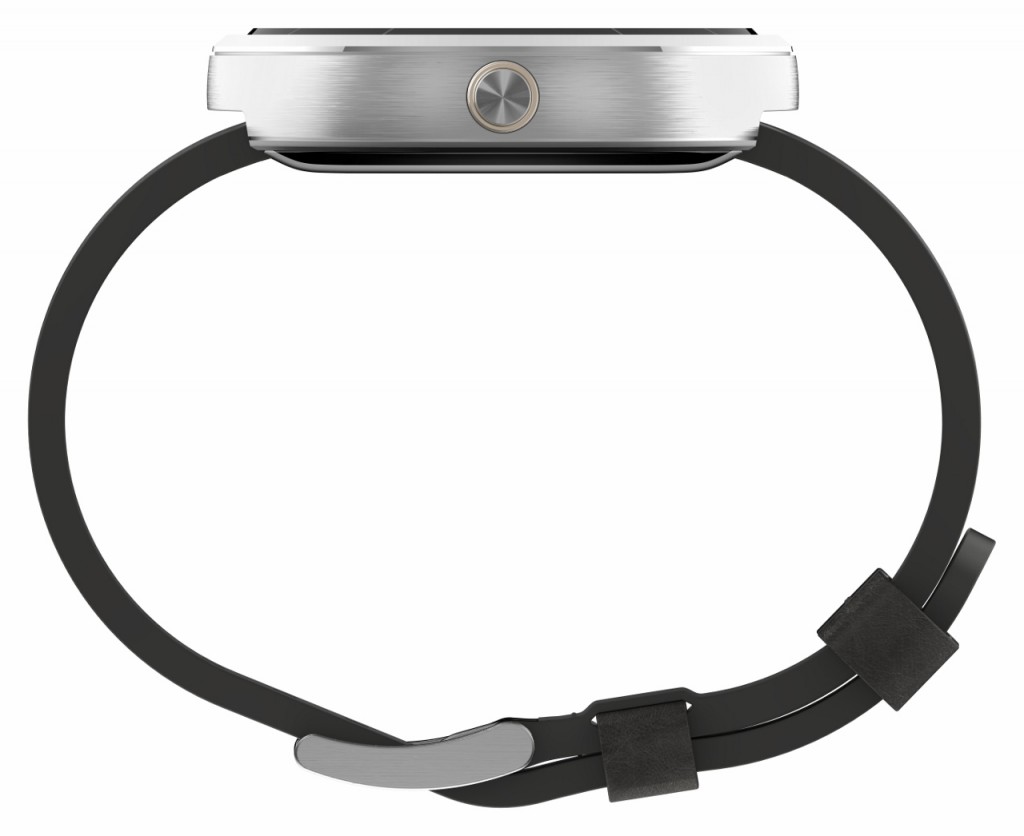 Emails can be read and responded to, as can messages from texts, Facebook and Whatsapp amongst others. Workouts can be started, runs can be logged, maps can be opened up and directions given, music playback can be controlled, cars can be ordered through Lyft, flight details and boarding passes can be displayed and so much more. Android Wear will only continue to improve, and the amount of times I pull my phone out of my pocket each day has been significantly reduced as more apps start to work with it. Google’s excellent voice dictation is obviously key to this, as it’s your only means of responding to items or asking questions on the 360 — and the watch’s dual microphones mean that it rarely fails to understand what I’m saying. However, despite Google’s assertions that Android Wear was designed for both square and circular displays, it’s undeniably better suited to the former. On the 360, certain lines of text were cut off by the edges of the display, something particularly noticeable when scrolling through an email or a text and present on certain third-party apps. It’s not going to ruin your experience, but it’s another quirk which Google will likely tweak as more round-faced watches hit the market.

In day-to-day terms, the 360 is a joy to use. It helps that it simply looks so damn good on the wrist. It’s sleek and modern, but still recognizable as a watch. Motorola continues to push software updates to it, which have helped with concerns over battery life and its aging processor, while on the wrist it’s easy to forget that you’re wearing it. At 1.7 ounces for the leather model, it’s a featherweight. Just make sure to have that strap wrapped tightly around your wrist, however, as the optical heart rate sensor can be persnickety with regards to whether or not it’ll actually detect your pulse. Sometimes it’s perfect, sometimes I started to wonder if I’d died without realizing.

Minor annoyances aside, the real question is whether or not you should actually buy it? I’ll admit, I rarely wore a watch before I got the 360 — my phone was my preferred means of telling the time. Now? I wear it every day. The sheer convenience of seeing and responding to notifications from your wrist can’t be ignored, and when it’s operating through something which looks as good as the Moto 360, it makes it even more pleasurable. LG’s G Watch required too many compromises when I reviewed it, but with the Moto 360, as both a watch and a smartwatch it’s leagues ahead. Thanks to some of its internals, the 360’s beauty may only be skin-deep — but it’s gorgeous enough that you simply won’t care. For $249, it’s the best smartwatch you can buy today.

The Motorola Moto 360 starts at $249 and is available from the Google Play Store and via Motorola.

Rhuaridh Marr is Metro Weekly's online editor. He can be reached at rmarr@metroweekly.com.
← Previous Story Microsoft Band
Next Story → Lamborghini will sell you a branded smartphone — for $6,000