Bundling up your pets may not be a bad idea after all. 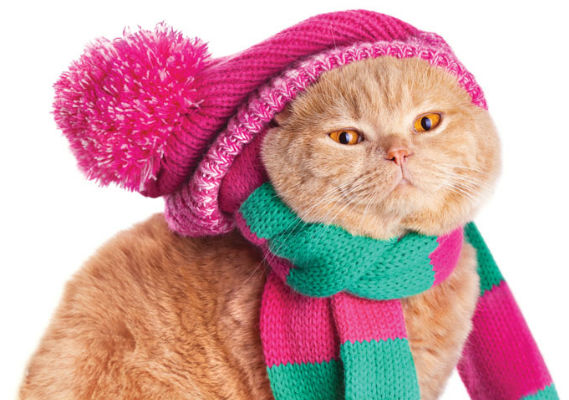 When the weather outside is frightful, it’s best to keep your pet indoors, and minimize their outdoor exposure.

“Dogs particularly are not very good about setting their own limits, especially if they’re having fun outside,” says Janine Calabro, chief of emergency and critical care at D.C.’s Friendship Hospital for Animals. “If it’s too cold for you to be outdoors without your hands getting really cold, then maybe your dog shouldn’t be running around for too, too long outside either.”

Antifreeze may taste sweet to animals, but its effects are decidedly not. Antifreeze contains ethylene glycol, which is very toxic to both dogs and cats, and can cause neurological abnormalities, including seizures, and gastrointestinal complications, including acute kidney failure. “It is fatal without prompt treatment,” Friendship Hospital’s Calabro says. “Even one little lick for a small pet can be quite dangerous. Any exposure and they should be promptly brought to a veterinarian.”

Wintertime doghouses, says Nick Lipincott, a humane law enforcement officer with the Washington Humane Society, need to be “raised off the ground to keep from flooding as snow melts [and feature] a windbreak so the insulation from [a dog’s] body heat is not pushed out from the cold.” Also, a dog’s water needs to be constantly changed, put in a heated water bowl or placed under a heat lamp to keep it from freezing.

Both Calabro and Lipincott advise putting at least a light coat on top of thin-coated dog breeds, such as greyhounds and Jack Russell terriers. A coat will help keep their skin both warm and dry, shielding from snow or freezing rain, and suiting them in the same way that natural fur does on their thick-coated brethren.

Of course, not every little dog will stand for wearing a coat. In which case, especially with short-haired, skinny dogs, or those older ones suffering from arthritis, Calabro recommends more frequent but shorter trips outside — enough to “still get a decent amount of daily activity and daily walking in.”

5. All about that paw

If you don’t clean your pet’s paws after a walk, they’ll likely do the deed with their tongue — and licking too much Ice Melt can cause upset stomachs and digestive problems. The chemicals used in snow and ice removal and the overall dry air outside can also cause paw irritation. For more sensitive dogs, Calabro recommends “putting booties on them, as silly as they look.” If you or your dog won’t allow the wearing of silly booties, then you should wipe their paws clean after walks with at least a damp, clean rag. Rubbing baby oil or Vaseline either pre- or post-walk on a dog’s paws can also help keep them free of slushy buildup, Lipincott recommends. It can also help keep pads from drying out and cracking.

In addition to Vaseline, consider trimming the hair on a dog’s toes every winter to keep the area clean and clear, says Calabro. She also recommends bathing your pet less often in the dry, winter months, using a moisturizing shampoo, and brushing them regularly between baths.

Stray cats looking for shelter often curl up in or around still-warm parked cars. “That’s why we have a lot of cats getting stuck in cars and car engines,” Lipincott says. So before hopping in and turning on the motor, look around and make a bit of extra noise, even tap on a car’s hood, as a warning for a cat to flee.

“I do recommend continuing flea and tick prophylactics throughout the year,” Calabro says. In part because some ticks survive into the winter, but also because it’s harder to forget when you squirt your pet with medicine routinely the same day and time every month.

There’s a whole list of things your pet shouldn’t eat because they’re toxic — and yet might, given the indulgent nature of the holidays. Friendship Hospital sees an uptick in pets brought in over the holidays after they’ve consumed chocolate, fatty turkey skin or grapes, among other human food no-nos. This time of year it’s also important to keep your pet away from rat poison — or take them to the hospital right away if they ingest some. Just as with antifreeze, exposure to rat poison can be fatal if not treated promptly.

“We are the only 24-hour [animal] hospital inside the Beltway,” Calabro says. In fact, Friendship Hospital is currently expanding its large Tenleytown complex and will soon have even more staff working in more specialties. Meanwhile, WHS works with the city government to enforce the city’s animal cruelty laws and to provide shelter to all animals in need. It’s the place to call 24/7, according to Lippincott, “if an animal is…in some form of distress [or] if you have any concern about an animal you see that may not be getting the proper requirements in the cold months, or anytime.”