“How could they allow outright discrimination to be published on a state license plate?” 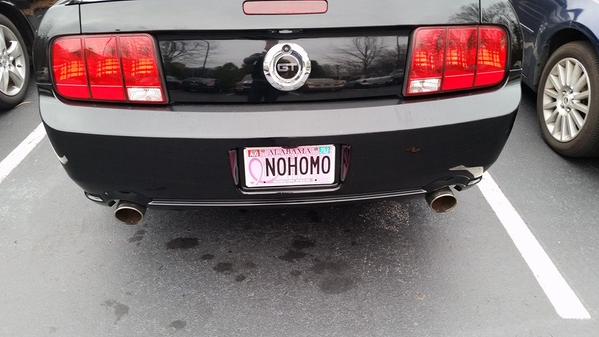 Johnston spotted an Alabama-issued license plate in the parking lot of an office with the designation “N0H0M0” — or “no homo”. Johnston told ThinkProgress that he was “first shocked, then angered,” though his photo didn’t draw attention until it was tweeted by Paul Fulton, Jr., with the caption “WOW. State of Alabama OK’d this plate?”

A spokesperson for the Alabama Department of Revenue stated that personalized license plates are considered by a three-person review panel, and that requests will be denied if they include “anything explicit, any profanity, or vulgar language.” Apparently, “no homo” wasn’t considered vulgar enough for the state’s review board. The phrase is often used by straight men after saying or doing something which could be interpreted as gay. Nick Catucci, writing for Vulture, stated that, “In a sense, ‘no homo’ is just a more evolved way of calling someone a ‘faggot’.”

Rhuaridh Marr is Metro Weekly's managing editor. He can be reached at rmarr@metroweekly.com.
← Previous Story Gay villain on CW’s ‘The Flash’ is “a huge step forward”
Next Story → Ex-gay movement’s poster boy comes out as gay