By Randy Shulman on December 11, 2014 @RandyShulman

“I’ve really been trying to make an effort to talk with my gay fan base and find unique opportunities to set up the next chapter of my life and my career with them in it.” 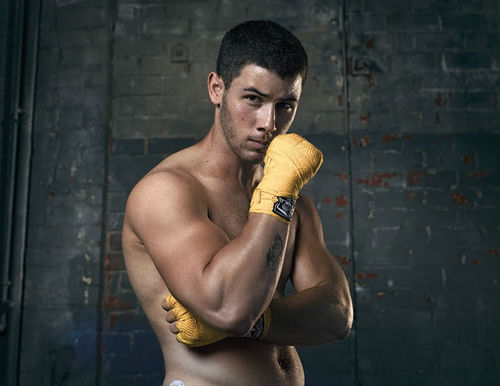 — Singer/actor Nick Jonas, who plays Mixed Martial Arts fighter Nate Kulina on the DirecTV show Kingdom. In the MMA drama’s Dec. 10 season finale, it was finally revealed that Nate is in fact gay, something Jonas had alluded to in September.

“For me, it was important to maintain the stakes for Nate,” the 22-year-old told Buzzfeed News. “He lives in a world of fear — fear of disappointing his father, both in the cage and outside of the cage — and he carries that pressure with him in so many ways. I think it’s something a lot of people can relate to.”

The show’s creator, Byron Belasco, said to Buzzfeed that he “wanted to tell this story in an environment that would be, perhaps, extra challenging for a gay man. Really show somebody who is struggling with this part of his life and reconciling it with the combination of what it takes to be an elite level athlete and how that concentration makes you to block out and ignore real questions that you have about yourself and about the life you’re living.” He added that the character would still live a closeted existance on the show, saying, “The bigger issue for Nate is not what everybody else will think but his perception of what everybody else is going to think.”

Jonas added, “I think it would be ideal if Nate could just live in his truth and be exactly who he needs to be and be OK with it, but the reality is that, for him specifically, it’s tough. There’s a journey he has to go on, and I hold that with a lot of responsibility and I’m thrilled to get to tell this story.”

The network picked up Kingdom for 20 more episodes to be split between two runs, the first premiering spring 2015. Jonas, a former member of the trio The Jonas Brothers, has a new self-titled solo album out, featuring the single “Jealous.” You can enter Metro Weekly’s contest for a chance to win a copy of that album here.

Randy Shulman is Metro Weekly's Publisher and Editor-in-Chief. He can be reached at rshulman@metroweekly.com.
← Previous Story “Walking Dead” creator: Daryl Dixon is straight
Next Story → TLC’s new special “My Husband’s Not Gay” is utterly bizarre