By Justin Snow on December 3, 2014 @JustinCSnow 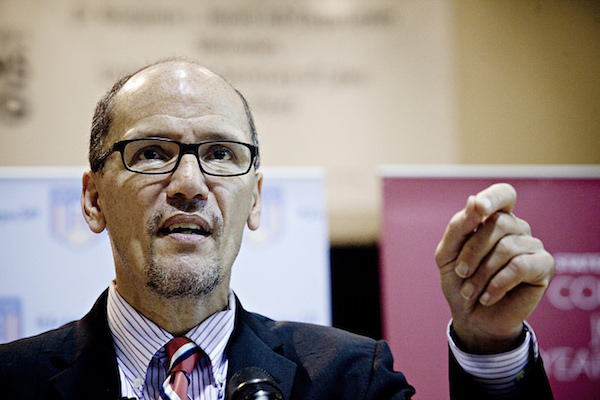 The rule implements Executive Order 13672, signed by President Barack Obama on July 21, and prohibits contractors who do work with the federal government from discrimination on the basis of sexual orientation and gender identity. The rule, posted Wednesday, will go into effect 120 days after its publication by the Federal Register on Friday.

“Americans believe in fairness and opportunity. No one should live in fear of being fired or passed over or discriminated against at work simply because of who they are or who they love,” said Labor Secretary Tom Perez in a statement. “Laws prohibiting workplace discrimination on the bases of sexual orientation and gender identity are long overdue, and we’re taking a big step forward today to fix that.”

Following Obama’s signing of the executive order this summer, the Labor Department was tasked with drafting the rule, which was submitted to the Office of Management and Budget for review in October.

Approximately 20 percent of the nation’s workforce is employed by federal contractors. Companies contracting with the federal government for $10,000 or more in a single year are already prohibited from discriminating on the basis of race, color, religion, national origin or sex.

“We are building on the work of presidents and members of Congress from both parties who have expanded opportunities for America’s workers,” stated Patricia Shiu, director of the Labor Department’s Office of Federal Contract Compliance Programs, which will enforce the new rule. “This rule will extend protections to millions of workers who are employed by or seek jobs with federal contractors and subcontractors, ensuring that sexual orientation and gender identity are never used as justification for workplace discrimination by those that profit from taxpayer dollars.”

The announcement of the rule was praised by LGBT-rights advocates and members of Congress who had long pressured Obama to act. Rep. Jared Polis (D-Colo.), the lead sponsor of the Employment Non-Discrimination Act in the House, used the occasion to again call on House Speaker John Boehner to allow a vote on ENDA.

“This is a critical step, but its limit to federal contractors reminds us once again that there are still countless workers who are subject to legal discrimination across the country,” Polis said in a statement. “It is time for Speaker Boehner to stand up to prejudice and allow a vote on the Employment Non-Discrimination Act.”

On Wednesday, six of ENDA’s eight Republican cosponsors in the House sent a letter to Boehner urging him to allow a vote on the bill.

Sen. Jeff Merley (D-Ore.), ENDA’s lead sponsor in the Senate, praised the announcement while noting more work must be done.

“Today’s ruling moves us in the right direction, but we still have more work to do,” Merkley said in a statement. “We must continue to pursue full equality for all Americans, not just those who happen to work for federal contractors or live in certain states. I look forward to continuing to work with my colleagues and our partners in the LGBT community so that our laws reflect our values and guarantee equal treatment for all Americans.”

Merkley is scheduled to speak at a Center for American Progress event next week addressing the need for a comprehensive LGBT civil rights act that would secure nondiscrimination protections in employment, housing, public accommodations, credit and federal funding for LGBT Americans. Human Rights Campaign President Chad Griffin, who has called for a broader LGBT civil rights bill to be introduced in the next congress, will appear on a panel at the event.

According to Merkley spokesperson Martina McLennan, Merkley will address the need for comprehensive LGBT nondiscrimination protections during his remarks.

“Senator Merkley is a strong supporter of ENDA, which, if passed by the House following the Senate’s bipartisan passage, would immediately write into law protections for millions of LGBT Americans who today can be fired simply for who they are or who they love,” McLennan said in a statement. “He has also long believed that discrimination is wrong in all forms, not just in employment. He passed a comprehensive equality bill in Oregon as the Speaker of Oregon’s House, and looks forward to discussing how to replicate that success nationally at CAP next week.”